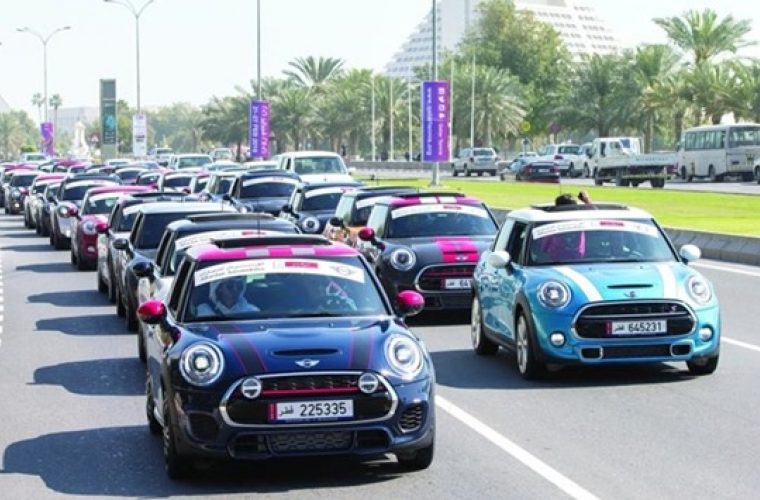 The iconic Mini brand has a huge fan following all over the world and so also in Qatar. And the fans in Qatar were given a double treat over the weekend.
The ‘Yalla Mini’ road show began with customers driving Minis in a convoy from the Alfardan Automobiles Mini showroom in West Bay to the Losail International Circuit. And then the fans were able to take the various Mini models for a spin on the track.
This roadshow, held with the support of the Mawater Group, gave customers an opportunity to discover the track credentials of this British brand for the first time on the Losail Circuit.
The Mini John Cooper Works (JCW) hatch was the top attraction of the day. Also present were the Mini 5 Door Hatch, Mini 3 Door Hatch and Mini Countryman. ’Yalla Mini’ familiarised guests with the various characters and features of each of the models through a series of dynamic driving experiences.
Ihab Allam, general manager of Alfardan Automobiles, said: “Our “Yalla Mini” roadshow is the ideal platform to give Qatar’s Mini fans the best brand experience, and fits perfectly with Mini individual character, and we have taken this a step further taking the event for the first time to the Losail Circuit. During this event, our customers will not only connect with the British brand and its values, but also get to know the vehicles’ strength, technologies and attitude on the road through various dynamic driving activities.”
The Mini JCW hatch made its debut in Qatar last year and boats of the most powerful engine for a production Mini – a 2.0-litre TwinPower Turbo engine that delivers 231hp of power and 320Nm of torque.
It also draws on the brand’s motorsport expertise with a package of suspension, brake, aerodynamic and interior upgrades to deliver race-car sensation without losing sight of Mini’s premium position, making it the ideal vehicle for the Losail circuit.
The Mini 5-Door Hatch and 3-Door Hatch come in two engine variants of the BMW Group's latest generation 3 and 4-cylinder engines equipped with TwinPower Turbo Technology. The 4-cylinder petrol engine in the Mini Cooper S 5-door produces 192hp and the three-cylinder petrol engine has a peak output of 136hp. Both models come with a six-speed automatic gearbox.
The success of this British brand in Qatar continued in 2015, with Alfardan Automobiles seeing a successive year of double digit growth for Mini, with a 34% increase over the last year.
The favourite models in Qatar were the Mini 3-door Hatch, Mini Countryman and Mini John Cooper Works.
The 3-door Hatch achieved the highest growth with 27% and along with the 5-Door Hatch, commanded the biggest sales share for the Qatari importer. The Countryman saw the second highest sales growth with 18% compared to last year.
The JCW remained a top seller, resulting in Alfardan Automobiles retaining its position as having the highest sales shares for these models in the entire world and selling more JCW cars than any other market in the Middle East. (Source)