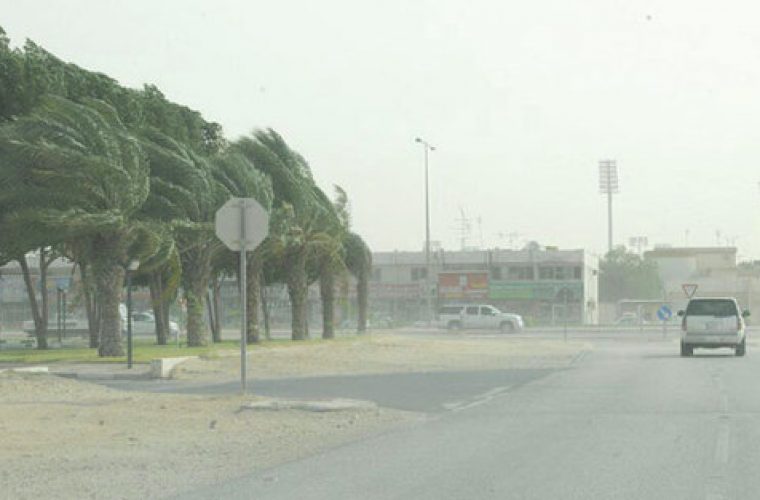 The night could be colder today with the mercury dipping to 14 degrees Celsius as early as 9pm, according to weather forecasts. The day will be relatively hotter with continual sunshine and temperatures reaching 20 degrees C by 9am and noon amid a partly dusty, cloudy and windy weather.

Visibility is likely to be low early this morning, improving gradually to 6km as the day progresses. It would be colder by 3pm as the mercury might drop to 16 degrees C and to 15 degrees C by 6pm. The wind will be northwesterly blowing from the colder regions of Europe, with speeds ranging from 12 to 22 knots onshore. Offshore, waves could reach 14 feet with strong northwesterly winds of speeds that might at times peak at 40 knots.

Forecasters said humidity levels could range between 40 and 65 percent today. The windy and cold weather is expected to continue through the night, with the mercury plunging to 13 degrees C by 3am tomorrow. It would be colder by 6am tomorrow with the temperature averaging at 15 degrees C.

However, by 9am and noon, the mercury would rise to 19 and 21 degrees C, respectively. There would a gradual fall in the mercury levels, as by 3pm the weather could be a bit colder with the temperature sliding at least three notches. By 6pm tomorrow, the temperature could be 17 degrees C and two notches down by 9pm. On Wednesday when the country celebrates National Day, the morning is forecast to be colder, with the mercury dropping to 14 degrees C by 3am but gradually reaching 17 degrees C by 6am.

The noon will be hotter with temperatures reaching 23 degrees C and dropping to 16 degrees C by 9pm, bringing in some chill. The morning is likely to be a bit foggy on Thursday and a bit colder with the mercury dropping to 15 degrees C by 3am and 16 degrees C by 6am. From today until Thursday, the wind direction will be northwesterly and speeds could on average range from 12 knots to 20 knots tomorrow and on Wednesday and Thursday.

The partly cloudy and dusty weather is expected to continue until at least Thursday, according to detailed three-hourly weather forecasts released by the Department of Meteorology yesterday. Article: http://thepeninsulaqatar.com/news/qatar/264648/windy-weather-colder-night-forecast-today Photo: Gulf Times