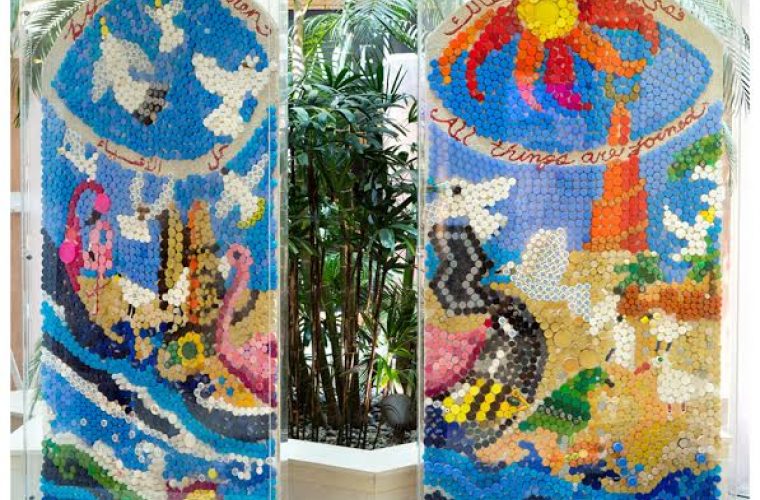 The Middle East’s most innovative urban development, The Pearl Qatar, today announced it will be organizing ‘The Trash to Treasure’ art project 2014 at The Pearl-Qatar in association with the Qatar Green Building Council. The project will be completed over 4 consecutive weekend days, March 21, 22, and 28, 29.

“We are very proud to organize and launch this project at The Pearl-Qatar,” Saeed Al Sulaiti, Director of Operations at The Pearl-Qatar, said. “This initiative highlights the Island’s total commitment to environmental responsibility and to promoting innovative ways of managing waste, thereby adding a new dimension to programs already in place at the Island in support of the environment.”

Aimed at highlighting the amount of waste people produce as well as introducing creative and artistic ways of dealing with trash, the project will culminate in a stunning recycled model in the form of a pond with water, fish, birds and flowers. A Large number of volunteers from all walks of life will come together to complete the project, driving the message through that reducing waste, reusing and recycling it is the way to go to minimize the negative effects of waste on the environment, and therefore encouraging the wider community to think about and actively engage in practices contributing to environmental sustainability.

“The Pearl-Qatar implements an excellent environmental program that includes the banning of plastic bags on the Island,” Roger Dagher, Director of Corporate Communications at United Development Company, the master developer of The Pearl-Qatar, said. “We actively support community and environmental initiatives and will continue to promote projects and programs aimed at protecting and enhancing Qatar’s environment and quality of life, and consequently the world’s.”

The previous Bottle top art project in 2012 was the brainchild of Dr. Sarah Clarke, a member of the Solid Waste Interest Group (SWIG) of the Qatar Green Building Council, and Ronnie Anderson, also a member of SWIG. The previous event was so successful we have decided to do it again. The art project involves a collection of as many as 60,000 bottle caps, bottles, bags, plates and spoons. Artist Patric Rozario, a member of the Visual Arts Forum India (VAFI), as well as other artists from VAFI will participate. VAFI is credited with preparing the ‘pond’ design, and many of its members will play active roles in building the 3D pond project, to be unveiled on the 29th March in celebration of Earth Hour.

Involving a collection of as many as 60,000 bottle caps, bottles, bags, plates and spoons, the Art Project 2014 is sponsored by Jotun, Spinneys and Qatar Plastic Products Company (QPPC), and is designed by the Visual Arts Forum India (VAFI). Artist Patric Rozario, an active member of VAFI, and many of the group’s other members will play key roles in building the 3D pond project, to be unveiled on March 29 in celebration of Earth Hour.

Earth Hour began as a single-city initiative in Sydney, Australia in 2007 and has since grown into a global movement. Millions of people from more than 4,500 cities and towns in 128 countries will be switching off their lights for Earth Hour on March 29.

In addition to unveiling the pond model on Saturday, March 29, The Pearl-Qatar will also glow by candlelight, joining communities and organizations around the world in celebrating this special hour. Last year this time, a number of dining outlets on the Island had served dinner by candlelight, while most residents turned off non-essential lights between 8:30 p.m. and 9:30 p.m.