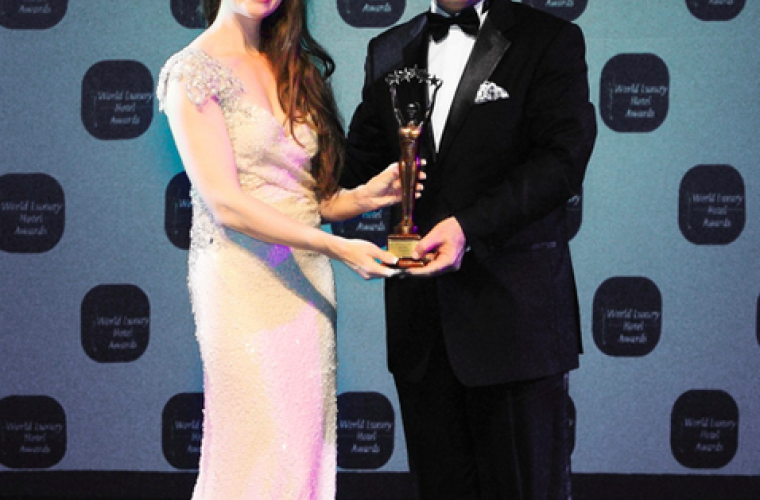 Further International Recognition for Doha’s Leading Luxury Travel Destination The St. Regis Doha has once again been honored with one of the world’s most prestigious awards, being named Country Winner, “Luxury Hotel” for 2013 in a glittering ceremony held in Phuket, Thailand. Held earlier this month, this year’s World Luxury Hotel Awards welcomed 300 guests to recognize those hotels and spas that have excelled in their fields, surpassing all others in delivering extraordinary service. Regarded as the Oscars of the global hotel industry, the World Luxury Hotel Awards is regarded as the highest accolade a property can receive. The World Luxury Hotel and Spa Awards celebrate world-class service excellence in exceptional hotels and spas, representing the pinnacle of achievement for hoteliers worldwide. It is therefore fitting that the 2013 World Luxury Hotel Awards for “Luxury Hotel Qatar” was awarded to The St. Regis Doha, a property recognized for its timeless elegance, luxury and renowned service standards. Winners are judged on service, excellence and quality management. Tareq Derbas, General Manager, The St. Regis Doha, said: “We are honored to win the “Luxury Hotel Qatar” award at the World Luxury Hotel Awards, and to be considered a leader in Doha’s rapidly-growing luxury hotel segment. This award recognizes the legacy of the St. Regis brand and the dedication of our team to meet the high standards of our guests.” The award follows the hotel’s success at the regional World Travel Awards earlier this year, when it was named “Qatar’s Leading Resort 2013” and “Qatar's Leading Hotel Suite: Presidential Suite 2013” at the World Travel Awards. The hotel upholds its reputation of excellence, having won 14 awards since opening in 2012. With its unique business and recreation facilities, and award winning restaurants The St. Regis Doha sets a benchmark for hotels in Qatar.as it continues to grow as an international tourist and business destination, and this award “Luxury Hotel Qatar” affirms Doha’s standing as one of the world’s top travel destinations. - ILQ News -