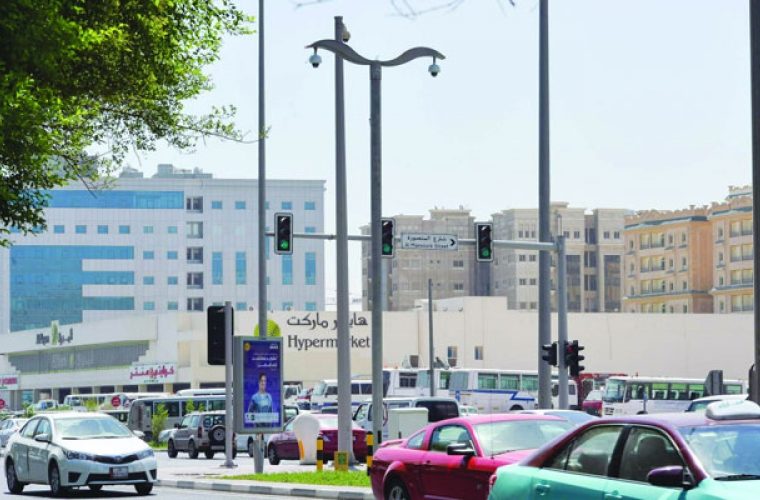 New surveillance cameras, installed on several roads across Qatar, will augment monitoring of a number of traffic violations and enhance road safety.
Central Operations Department of National Command Centre in association with General Directorate of Traffic and General Directorate of Information Systems (Security Systems Department) had announced the launch of the project a few months ago.
Many such cameras are seen on some of the major roads while more are being installed at other roads. Lately, a long stretch from Midmac flyover on Al Shamal Expressway has got several such cameras. New cameras are set up on the road at about every 100 to 200m distance.
"The new cameras are being set up as part of the project ‘talaa’, which aims to activate security surveillance cameras in the streets and main roads in the country to monitor traffic violations of all types, as specified by the traffic law," an official of the Ministry of Interior said.
Areas under the talaa surveillance include Al Khor, Al Sadd – Al Mirqab, Al Sailiya, Al Shafi, Bin Omran, D Ring Road, February 22nd Road (which is a part of Al Shamal Expressway), Grand Hamad St, Mesaieed, Muaither and Umm Dawm, Shahaniya and Al Wakrah.
The project aims to monitor all kinds of traffic violations including not fastening seat-belts, talking on the phone or texting while driving, wrong overtaking, excessive speed, violating signals and other irregularities which pose a threat to public safety on the road.
The owners of the vehicles will be informed about the traffic violations by text messages through Metrash Services.
According to the Security Systems Department, this will contribute to tightening security control in all parts of the country as well as to facilitate traffic movement and monitor any traffic violation with in time.
The traffic department had undertaken a trial process of the project a few months ago and monitored more than 23,000 traffic violations. All the cameras on the roads are smart cameras and can be controlled from the operations room by monitoring violations by zooming onto vehicles and capturing the number plates and location.