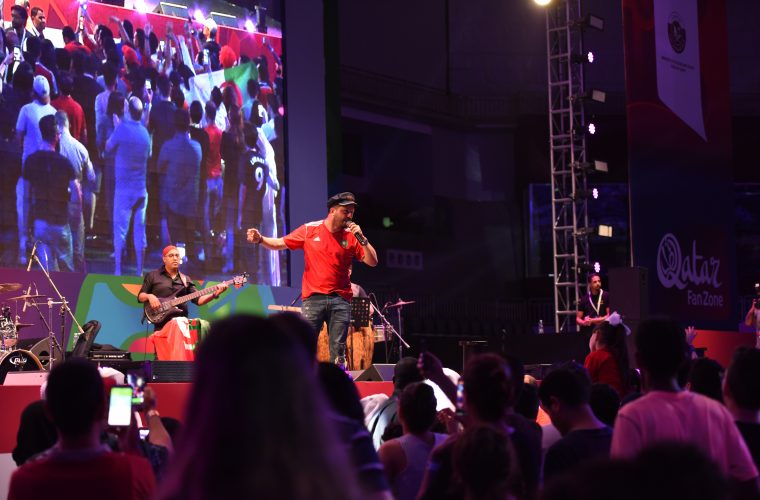 Qatar Fan Zone at the Ali Bin Hamad Al Attiyah Arena is adding to its cultural offering through a series of six free, live concerts between the evening match screenings of the 2018 FIFA World Cup Russia™ for all the visiting football fans and families to enjoy. The series of performances kicked off yesterday, Monday 25 June with Moroccan singer Hatim Ammor as the first star to take the Zone’s stage before the kick-off between Morocco and Spain.

The music concerts, organised by local entertainment business Social Studios, will be bringing some of the most loved music stars from across the Middle East, including North Africa’s world-renowned Cheb Khaled, who is due to perform for the Fan Zone’s visitors on. All concerts are scheduled to start at 7:30 pm.

During the quarter finals of the World Cup, the music concerts will feature Iraqi singer Mohammed AlFares and Lebanese artist Ziad Bourji on Friday, 6 July and Saturday, 7 July respectively.

And, in the following and final week of the month-long tournament, Kuwaiti Star Academy sensation Essa Almarzoug is set to take the stage on Tuesday, 10 July, followed by his compatriot star Ibrahim Dashti the next day (Wednesday, 11 July).

Qatar Fan Zone is organised by the Supreme Committee for Delivery & Legacy (SC), the Ministry of Culture and Sports (MCS) and QTA. For the latest news from Qatar Fan Zone follow the SC (@roadto2022) and Qatar Calendar (@QatarCalendar) on social media.

Qatar Fan Zone is a highlight of this year’s Qatar Summer Festival (QSF), which kicked off on the first day of Eid Al-Fitr. Organised by Qatar Tourism Authority (QTA), the 11-week festival is a nationwide celebration of the country’s diverse retail and hospitality offerings, complemented by a host of entertainment and sports activities.