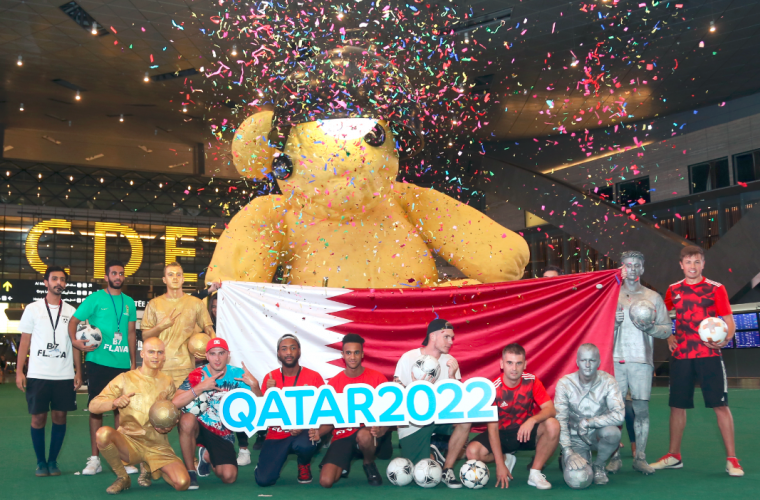 The Supreme Committee for Delivery & Legacy (SC) and Hamad International Airport (HIA) have wrapped up a month of activities held at the airport’s football Fan Zone throughout the 2018 FIFA World Cup Russia™.

The Fan Zone was a huge success with fifty thousand active participants enjoying the exciting matches at three beautifully-themed areas, which were set up as a living room, a stadium and a majlis – a traditional Arabic seating area where guests are received.

As part of the festivities, the SC and HIA also launched a ‘digital portal’, providing football fans travelling through the airport with an interactive experience by allowing them to view live streams of the different landmarks in Russia during the 2018 FIFA World Cup™, including Kamergersky Lane, Revolutionary Square, Tsvetnoy Boulevard in Moscow, and Bolshaya Morskaya street and Dvortsovaya Square in St. Petersburg. Football fans in Russia also had the opportunity to view the iconic yellow Lamp Bear at HIA through the portal.

The SC’s Director of Communications Fatma Al Nuaimi, said: “It’s now just over four years until Qatar welcomes the world to the first World Cup to be held in the Middle East, and the first in the Arab world. It’s been fantastic to be able to give fans at HIA a real taste of things to come. We look forward to welcoming them all back for what we hope will be the best World Cup yet. Finally, I’d like to thank everyone involved in the Fan Zone and I look forward to working closely with HIA in the coming years.”

“Hamad International Airport is truly a gateway to the world and the World Cup excitement this past month as we brought the action of 2018 FIFA World Cup Russia™ to our airport, ensuring travellers never missed a moment of the worldwide football phenomenon. As the next FIFA World Cup destination, we wanted to bring the World Cup spirit to life by merging our world-class facilities, hospitable culture and love for football,” said Abdulaziz Al Mass, Vice President Commercial and Marketing at Hamad International Airport.

The entire terminal displayed a World Cup spirit with roaming entertainment, including football freestylers and jugglers, as well as impromptu football matches. Pop-up activations with foosball games and virtual football were also available throughout the month and fans had the chance to have their faces painted with their favourite country’s flag. The airport Fan Zone welcomed as many as 2,600 active participants on a single day.

The airport Fan Zone is the latest step in HIA’s preparation for the 2022 FIFA World CupTM. HIA, awarded the ‘Best Airport in the Middle East’ ‘by the Skytrax World Airport Awards for three years in a row, is instrumental in giving the warmest welcome to thousands of football fans travelling from across the globe to Doha. Qatar’s airport is aiming to provide seamless connectivity for fans of the 2022 FIFA World Cup and is working towards smoothly handling more than 50 million passengers per year and as many as 96,000 arriving passengers per day during the World Cup period.