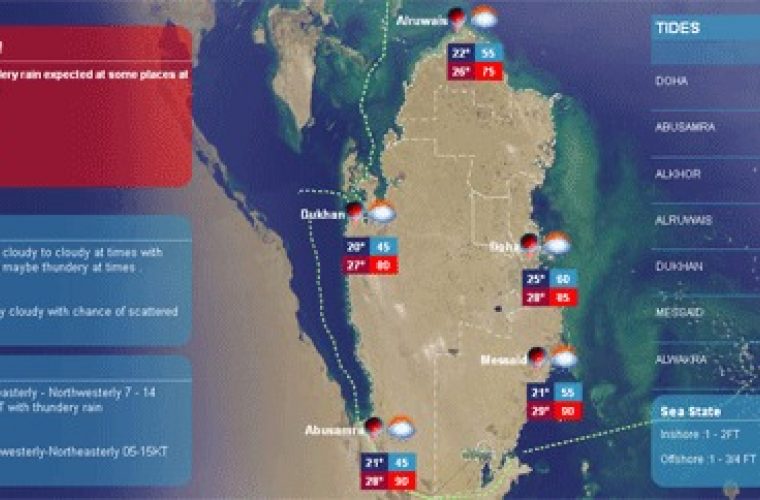 The Meteorology Department has forecast rains today, but denied rumours about heavy flooding and storms in the region. Local social networking sites were abuzz yesterday with discussions about a circular, apparently issued by the US Navy in Bahrain, which warned GCC states, including Qatar, about heavy flooding and a possible tsunami in the region. The rumours were being circulated through Facebook, Twitter and Blackberry Messenger, among others messenger services, and said that it would rain continuously for three days starting tomorrow. A meteorological official clarified that the rumours were, in fact, more than a month old and they were taking rounds in different countries for a while now. “Anyone who wants to get the weather forecast for Qatar should look at the official information that is provided by the Meteorology Department at qweather.gov.qa,” he said. He said that with the exception of Riyadh, there have been no reports of rainfall in Bahrain so far — contrary to the rumours. The official said that the Department had already issued a report that said there would be a period of unstable weather starting last Thursday until the end of this week. “Cloudy weather will prevail, and rain might fall starting today in the North-Western part of the country. The rains may engulf the whole country by the middle of the week,” he said, adding that the downpour will occur sporadically. Talking about the cause of the unstable weather, the official said: “The trough of pressure in the upper air level extending from Iran, might lead to the formation of clouds and strong winds.” Asked about the weather report that said it would rain last Thursday, he said that the report did not specify the day on which it would rain. “The report said the weather will be unstable, and we know that there were light rains in the North-Eastern part of the county and the middle of the sea.” The Department has forecast minimum temperature at 21 degrees Celsius today, while the maximum temperature could reach 28 degrees Celsius. The wind is expected to be northeasterly to southeasterly. http://thepeninsulaqatar.com/qatar/261054-rains-likely-no-flooding-met-official-.html