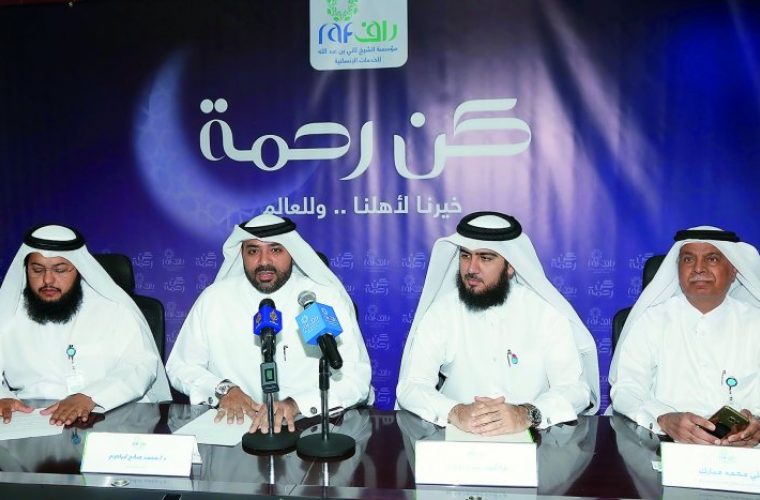 Sheikh Thani bin Abdullah Foundation for Humanitarian Services (RAF) has announced to offer iftar meals to 600,000 fasting people at a cost of QR12.2m during Holy month of Ramadan in Qatar.
The project was financed by people in Qatar in term of donations. “RAF will set up 35 iftar tents with the capacity of 17,500 fasting people on daily basis across the country,” said Dr Mohammad Salah Ibrahim, Deputy General Manager of RAF at a press conference yesterday.
“The biggest iftar tent with the capacity of 2,600 fasting people on daily basis will be established in the Industrial Area-Labour City. Other tents will be located in Al Wakra, Al Thumama, Muaither, Msheireb, Al Gharrafa, Abu Hamour among many other places. The iftar tents will have cultural programmes and lectures," said Ibrahim.
“RAF also plans to distribute iftar meals to motorists at six intersections in Doha. The motorists will be offered a total of 36,000 meals at the rate of 1,200 meals per day,” said Mohamad Rashid Al Marri, Head of the Community Services Department at RAF.
“Separate Iftar programmes will be held for major expatriate communities including Indian, Sri Lankan, Bangladeshi and Nepali in Al Arabi Club on Fridays.
The diplomats of these communities will also attend the programmes with their families. A total of 7,500 Iftar meals will be offered to the members of the expatriate communities. More than 600 food baskets will also be distributed among poor families," said Al Marri. As many as seven restaurants for providing Iftar meals and three companies for setting up Iftar tents have qualified for Ramadan project this year, said Ali Mohammed Mubarak, Executive Director-Shared Services Sector at RAF.
Regarding RAF’s Ramadan projects abroad, Ahmad Yusuf Fakhro, Head of Financial Resources and Media Section at RAF said: “We are collecting money for implementing 600 different charity projects worth QR100m in 60 countries in all over the world." The projects also include offering Iftar meals to fasting people and distributing food baskets. More than 65,000 poor people are expected to benefit from these projects.
RAF also has plans to implement Iftar projects that are meant to organise mass iftar and distribute food baskets in 52 countries in addition to giving Eid dresses and cash, said Fakhro. (Source)