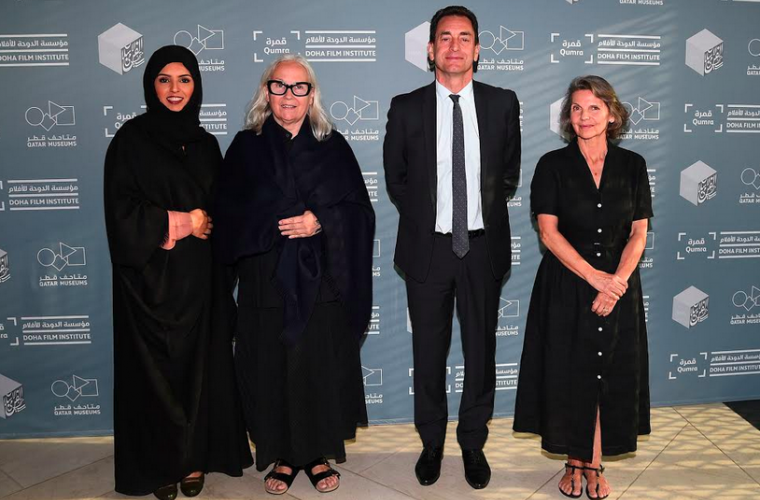 The first of the Qumra Talks, led by acclaimed photographer Brigitte Lacombe, was defined not only by a journey down 40 years of her illustrious career but also her inspiring work on behalf of Qatar in documenting international film talents and Arab women in sports.

In an inspiring presentation that featured mesmersising photographs of celebrities – from Leonardo DiCaprio to Meryl Streep and Mick Jagger, as well as Malala, Barak Obama and more, Lacombe took audiences through the story behind the portraits, underlining that she looks “for that moment of authenticity” in every frame.

This was part of the second edition of Qumra Talks, which leaders from film, television, technology and online worlds, for insightful discussions as part of Qumra, the industry event organised by the Doha Film Institute, with the first talk presented in partnership with the Northwestern University in Qatar.

Brigitte Lacombe was also joined on stage by her sister, renowned documentary filmmaker Marian Lacombe, and together, they also presented two of the illustrious projects championed by Qatar – I am Film, a visual archive of filmmaking talent – from the Arab world and beyond – as well as Hey’Ya: Arab Women in Sport, an inspiring take on the female athletes from the region.

For Hey’Ya: Arab Women in Sport, the Lacombe sisters had set up an outdoor studio at the Athletes Village at the Arab Games in Doha in December 2011, and was shot over a period of seven months. They also travelled through the Gulf and North Africa and worked with female athletes of all ages and levels of achievement. Arabic for ‘Let’s Go,’ Hey’Ya had 31 Qatari girls engaged in different sports form swimming to shooting.

Fatma Al Remaihi, Chief Executive Officer of the Doha Film Institute, said: “Our association with Brigitte goes back many years, when she was here in Doha for the Brigitte Lacombe Mentoring Programme for young photographers. We also worked together on I Am Film, which documented over 350 cinematic icons and on In Production, which captured the action behind the scenes at Doha Film Institute’s co-productions. She is a true friend of Qatar and the Doha Film Institute, who inspires legions of young talents around the world through her dedication and commitment to photography.”

Sharing her story, Brigitte said she was introduced to the world of photography after her father gifted her a camera. “I had no idea that it (photography) would become my entire life. There was not much of a natural propensity the first time around but gradually I became obsessed and it became my vocation.”

A turning point in her life came when she decided to cover the Cannes Film Festival, at a time when “there were very few women photographers. It was very different then and I was very young,” she said. The experience opened her world to Hollywood, and she has since been working closely with several acclaimed stars. To young creative aspirants, she had a message, as she described her own approach to securing work. “About 75 per cent of the work I do is generated by me (by reaching out to others). It is a good way to do the work you love.”

She said she places “100 per cent attention on the subject” and is particularly focused on defining “space and light” and ensuring that every work is like a “one-on-one meeting”. The inspiring session also had vignettes from the work that Brigitte did for ‘The Female Lead,’ a non-profit organisation that is dedicated to making women’s stories more visible.

Following the Qumra Talk on Monday by transmedia artist Simon Wilkinson on ‘Virtual Reality: Storytelling through Emerging Media’, in partnership with The British Council, the final discussion on Tuesday (March 13) will be on ‘Content for a Fragmented Media Universe’ in partnership with Northwestern University in Qatar, to be led by Jon Kamen, CEO of RadicalMedia. He will share his thoughts on emerging trends in media and how businesses are producing content for a fragmented media universe with social media and smart devices having disrupted traditional models of consumption.