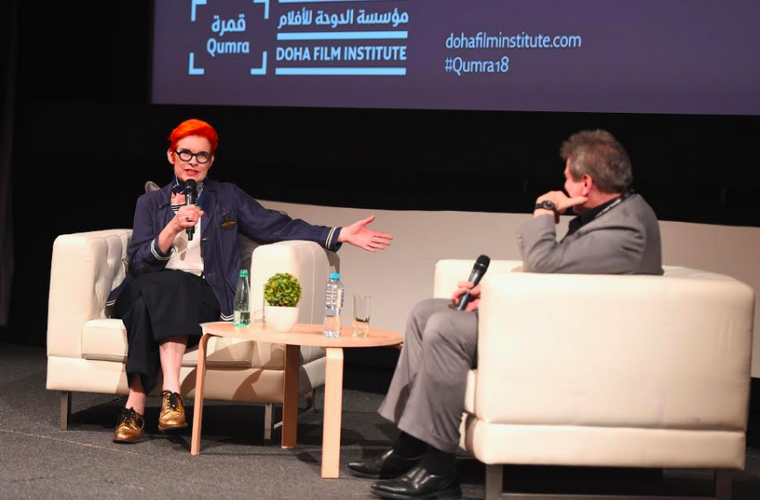 The fourth edition of Qumra, the annual industry event by the Doha Film Institute that focuses on building new voices in cinema, concluded with an inspiring masterclass by Qumra Master Sandy Powell, Order of the British Empire (OBE), Oscar® winning British costume designer (The Young Victoria, The Aviator, Shakespeare in Love).

The masterclass, which offered a behind-the-scenes look at some of the captivating films she had worked on, brought to close six days of lively discussions, interactions, mentoring sessions and workshops through which 34 Qumra Projects by first- and second-time filmmakers from 25 nations, were nurtured by six Qumra Masters and over 150 industry experts.

Moderated by Richard Pena, the Sandy Powell masterclass was highlighted by show-reels of some of her masterful works that brings out Powell’s versatility and ingenuity as one of the world’s renowned costumed designers.

Powell said she discovered her passion for costume design while working on theatre and going on to “learn from mistakes”. Her advice for young talents is to understand the art of costume design with the fundamental approach that “you are creating characters and making them believable”.

She discussed her debut work as film costume designer for Derek Jarman’s Caravaggio, after having worked with him on music videos. “I didn’t know what I was doing,” she said, with the average age of the crew at 25, and each of the member learning by doing. “It was real learning.”

With an accomplished ouvre that includes several period films, fairytales and historic set-pieces such as Orlando, Shakespeare in Love, Gangs of New York, The Aviator, Hugo, and Cinderella, Powell said that while it is important to work with the team, she also goes by her instinct and intuitive understanding of the character.

She said her priority in choosing a project is its script, and that is open to work in Bollywood, adding the industry “has a number of good designers already”. She does background research on the costumes from paintings as well as from contemporary fashion, “as there is always something one can take inspiration form it”, creates mood-boards for the characters, and then decides on the colours, contrasts and fabrics.

Powell said she is not overly attracted to working in science fiction films because “I am not attracted to them. I am not interested in creatures, aliens, and superheroes,” and she has taken delight in doing independent, low budget films because “they push you creatively” to work within the resources. Her advice, from her personal experience as costume designer, is to “work instinctively not intellectually”.

Qatar Museums, the Museum of Islamic Art and Souq Waqif were the Cultural Partners of Qumra 2018, while the event was supported by Culture Pass, the Translation and Interpreting Institute (TII) and FNAC the leading French Cultural store. SONY was the Official Electronics Partner and Souq Waqif Boutique Hotels by Tivoli was the Official Hotel Partner.

Extending support as ‘Friends of Qumra’ were: Sarajevo Film Festival, the French Embassy in Qatar, Northwestern University in Qatar, and L’Institut Français du Qatar, as well as The British Council. Screen International was the Media Partner.