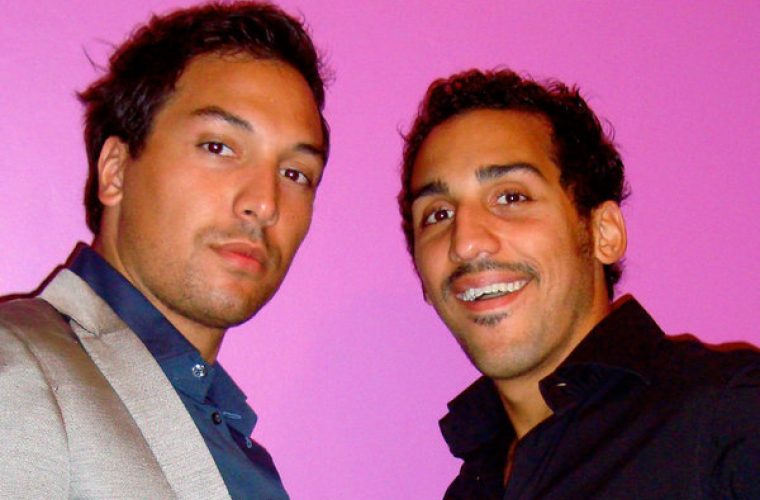 Zahir Belounis, right, will be reunited with his brother Mahdi in Paris on Thursday after a contract dispute kept him in Qatar. Zahir Belounis, a French-Algerian soccer player who has been unable to leave Qatar for more than two years because of a contract dispute with his former club, and whose case shined a light on the emirate’s labor laws, has been told he can return home. Belounis, 33, learned Wednesday morning that he would be granted a visa allowing him to leave Qatar. The decision ended an ordeal that he claimed had driven him toward contemplating a hunger strike and, at one point, suicide. “It is a fantastic day; we are so happy,” Belounis’s brother Mahdi said in an interview after he announced the news on Twitter. “He called me this morning, and his very first sentence was, ‘I have this bloody exit visa,’ which was quite funny,” he added, adding that Zahir was scheduled to land in Paris on Thursday evening. “For the first time in two years I heard him laughing. I’m really looking forward to holding my brother in my arms. So is our mother.” Belounis’s case had come to symbolize Qatar’s much-criticized sponsorship labor laws after he was prevented from leaving the country, which will host the 2022 World Cup, after a dispute over unpaid wages with his club, El Jaish. Under Qatar’s kafala system of sponsorship, workers are tied to their employers, whether as a soccer player or one of the 1.3 million migrant laborers working in the country’s construction industry. Employees are not allowed to leave Qatar without their employer’s permission. Human rights groups have been critical of the kafala system. Last week, Amnesty International released a scathing report on labor abuses in Qatar, and Human Rights Watch has blamed the sponsorship system for ensuring that hundreds of thousands of people “work under conditions of abuse.” An investigation by The Guardian in September found that dozens of Nepalese workers had died this year building a new city in Qatar that will eventually host the 2022 World Cup final. But it is not just Qatar that has been under fire over the treatment of workers in the country. FIFA, soccer’s global governing body, has been criticized for awarding its marquee event to Qatar in the first place. At last month’s meeting of FIFA’s powerful executive committee in Zurich, FIFA’s president, Sepp Blatter, agreed to meet with Qatar’s newly installed emir and raise the issue of worker rights. Last week, Blatter met with the International Trade Union Confederation and called the situation regarding worker rights in Qatar “unacceptable.” The Qatar 2022 Supreme Committee, the body charged with organizing the World Cup, has released a so-called workers’ charter, which, it says, will guarantee rights for all those working on projects in the country. But organizations like the trade union confederation, which has campaigned against the kafala system and called on FIFA to hold a new vote for the 2022 Cup, have pointed to the Belounis case to prove how little the situation has changed. Zahir Belounis was a journeyman player who had struggled in the lower reaches of French soccer. But in 2010 he was offered a five-year contract in Qatar with El Jaish, the army’s soccer team. He was also fast-tracked through the naturalization process so that he could represent Qatar at the Military Games. But when he returned from the games, he said, his Qatari passport was confiscated. He helped El Jaish gain promotion to the top tier of Qatari soccer but was then moved out on loan to another club, whereupon he says his pay from El Jaish stopped. After 18 months without pay, he pursued legal action but was told that he would be prevented from leaving Qatar until he dropped the case. FIFA, when asked about the Belounis case, said it was powerless to intervene because of the continuing legal case. “I’m crying like a girl every night,” Belounis said in an interview last month. Belounis said he and his family were surviving on money sent from relatives in France and from donations made by members of the French expatriate community in Qatar. His situation soon became a global cause; even Arsène Wenger, the French coach of the Premier League powerhouse Arsenal in England, had questioned why Belounis had not been allowed to return home. Two weeks ago, Belounis wrote an open letter to the French World Cup winner Zinedine Zidane and the Bayern Munich coach, Pep Guardiola, who have strong ties to Qatar. “I know that you served as ambassadors for Qatar’s 2022 World Cup bid,” Belounis wrote. “You did this with good intentions, but the reality is that if Qatar does not scrap its ‘exit visa’ system, then there will be hundreds, maybe thousands, of people trapped here.” At one point Belounis was visited by France’s president, François Hollande, who promised to help get him home. But the promises did little to change his status. “I told him that I am here just because I complained,” Belounis said in October of his meeting with Hollande. When presented with reports of the case, the Qatar Football Association at first accused Belounis of defamation and threatened legal action against him. As recently as last week, soccer officials said that Belounis had been paid and that the accusations against them had been false. Even after Belounis agreed to drop the claim, an exit visa was not forthcoming. He said he had sold all of his furniture and was living on the floor of his empty villa, waiting for news. It finally came Wednesday. The next step, Mahdi Belounis said, is to undo the psychological damage he said had been inflicted on his brother. “Zahir is still a depressed person and needs to gain confidence,” he said. He also hopes that Zahir will one day play soccer again. “I’m doing my best to get him training again, maybe with an English Premier League club,” he said. “It will be a symbol to say to Qatar: ‘You didn’t totally kill him.’ ” http://www.nytimes.com/2013/11/28/sports/soccer/after-2-year-dispute-soccers-belounis-can-leave-qatar.html?_r=0