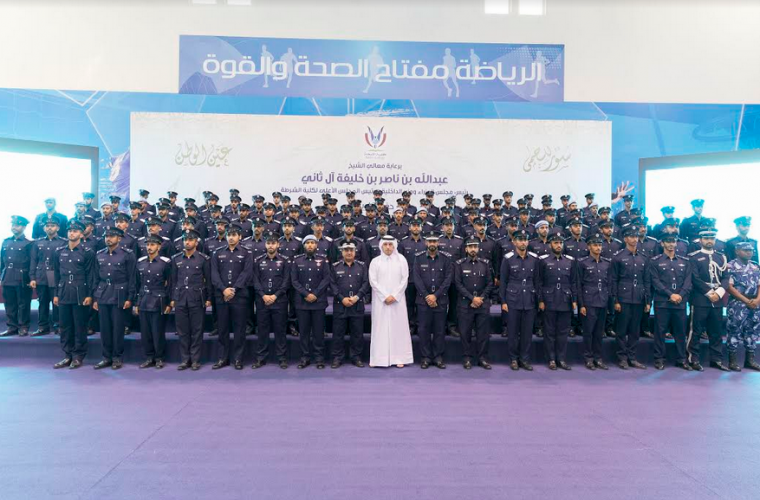 HE the Prime Minister and Minister of Interior Sheikh Abdullah bin Nasser bin Khalifa Al-Thani attended the graduation ceremony of the second mandatory qualifying course for graduates of civil universities at the Police College, which was held at the College's headquarters on Wednesday morning. Director General of Public Security HE Staff Major General Saad bin Jassim Al Khulaifi also attended the event. A total of 99 trainees completed the course held during 5 November 2016 to 10 May 2017.
The ceremony included various training presentations and military formations, as well as military parades under the supervision of Chinese infantry instructors. It also included a screening of a documentary about the graduates during the training course.
HE the Prime Minister also honoured the Chinese infantry instructors who participated in the training of a group of officers, non-commissioned officers and instructors at the Police College on the Chinese basic infantry course.
The second mandatory qualifying course for graduates which was organized by the College included 99 trainees from a number of military entities in the state with various specialties. During the course which lasted for six months, the graduates received various military, sport and police-related academic training.
Speaking on the occasion Director General of Police College Brigadier Dr. Muhammad Abdullah al Mohanna Al Marri said that the six months course has qualified the graduates and helped them to gain military knowledge and legal and security disciplines that prepare them for their future military career in the police force, capable of carrying out their functional duties entrusted with contributing to the protection and security of the capabilities of this State in various locations.
At the conclusion of the ceremony, HE the Prime Minister and Minister of Interior honoured the toppers in the course and handed over certificates to graduates. Ft. Lt. Abdul Aziz Yusuf Obaidan Fakhru, Ahmad Abdullah Ali Al Bouainin and Abdul Hadi Jar Allah Al Qahtani won the first, second and third prize respectively. Ft. Lt. Ali Saeed Ibrahim Al Mohannadi won the prize in body fitness and Ft. Lt. Ali Abdullah Ali Al Sulaiti won the best behaviour and attendance award.