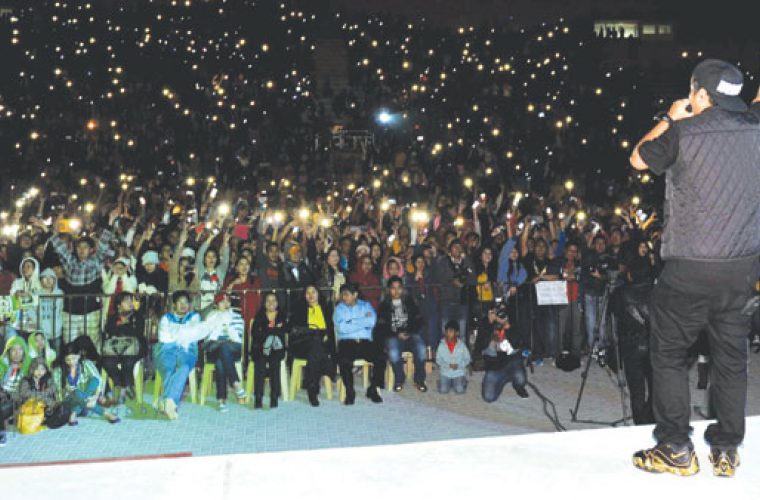 Popular Filipino artiste Aiza Seguerra, together with award-winning rapper Gloc 9, proved to be a good combination in a concert in Doha, which attracted more than 8,000 spectators.

Held at the West End Park on Friday, the “Stars Night Concert in Qatar” mesmerised many Filipinos as the singers performed hit songs.

“Pagdating ng Panahon (When Time Comes)” captivated every Filipino expatriate at the amphitheatre and they sang with Aiza, who was overwhelmed by the huge crowd.

The concert, once again, turned out to be a family bonding and gathering of friends and peers, in what was described as a “one-of-kind winter night”. She was also surprised with the cold weather in the country, saying what she knew about the Middle East was the opposite.

“Is this a desert, then why is it so cold here?” she quipped, when she was about to sing a song. “I love this place, awesome crowd, very nice country and nice people,” she stressed and vowed to hold another concert soon.

Fans also had the chance to have pictures and autographs with the artistes. The organisers lauded the Filipino community for supporting a much-awaited concert. Hundreds of students from different Filipino schools in Doha also welcomed the artistes during their tour. They also paid a courtesy call at the Philippine embassy.

Consultant and event organiser Bilal Taha told Gulf Times that the “Stars Night” was a new milestone in the Filipino entertainment scene in Qatar.

Taha’s group is bent on bringing more Filipino performers to Doha such as Sarah Geronimo and the Parokya ni Edgar band.

“We will bring more artistes this year to serenade hardworking Filipino expatriates,” he explained.

Many spectators also expressed their experience on social media, saying their loneliness and depression have been relieved by heartwarming Filipino songs.