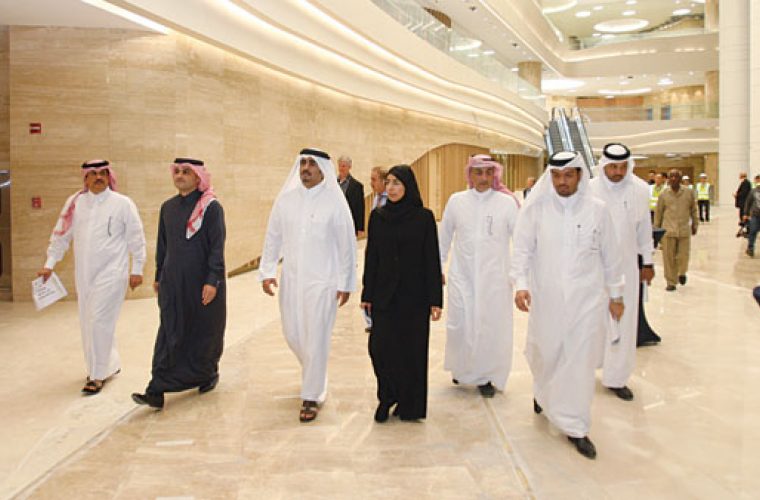 The Hamad Medical City (HMC) project, which comprises three specialised hospitals and a research centre, will be completed by the end of 2014, HE the Minister of Public Health Abdullah bin Khalid al-Qahtani yesterday said. Originally built as the Athlete’s Village for the Doha Asian Games 2006, work on revamping the facility as a medical complex was started in 2011. The QR2.13bn project will be delivered as scheduled, the minister said. After conducting a field visit of the site, the minister said he was satisfied with the high standards of the construction and the complex, when opened, would enhance the levels of healthcare provided in the country. He was accompanied by the President of the Public Works Authority (Ashghal), Engineer Nasser Ali al-Mawlawi, and Hamad Medical Corporation Managing Director Dr Hanan al-Kuwari. The Health Minister was briefed about the progress of the work being executed on an area of around 227,000sq m. “Through this field visit we have seen the high standards of the finishing works. The project will also contribute towards upgrading the medical services offered to the public,” he said. Al-Mawlawi said that around 79% of the work of the Hamad Medical City project had been finished and it was in the final stages. He described the work site as among the safest for workers as it had achieved 20mn work hours without injury. The project includes four buildings – Gynaecology and Women’s Hospital, Minor Surgery Hospital, Physiotherapy and Rehabilitation Hospital and the research centre and a bio-bank. All the buildings have been designed to provide both patients and visitors with comfortable surroundings similar to those at home. The Gynaecology and Women’s Hospital has 190 beds for women, 53 beds for children, an intensive care unit (ICU), 48 cradles and 22 delivery rooms. Besides, it has three specialised operation rooms and two chambers for Caesarian delivery. It is expected to provide advanced medical care for more than 8,000 cases a year. The Minor Surgery Hospital has 64 beds for patients, 52 beds at the ICU and 14 operation chambers and 12 beds to meet pre-operation needs. It is expected to conduct more than 28,000 minor surgeries a year. It also has various specialised clinics attached to it. The Physiotherapy and Rehabilitation Hospital has 200 beds with all related equipment and it has the longest suite for hydrotherapy in the GCC region. More than 5,000 people are working on the project in two shifts. http://www.gulf-times.com/qatar/178/details/375670/medical-city-to-be-ready-by-2014-end