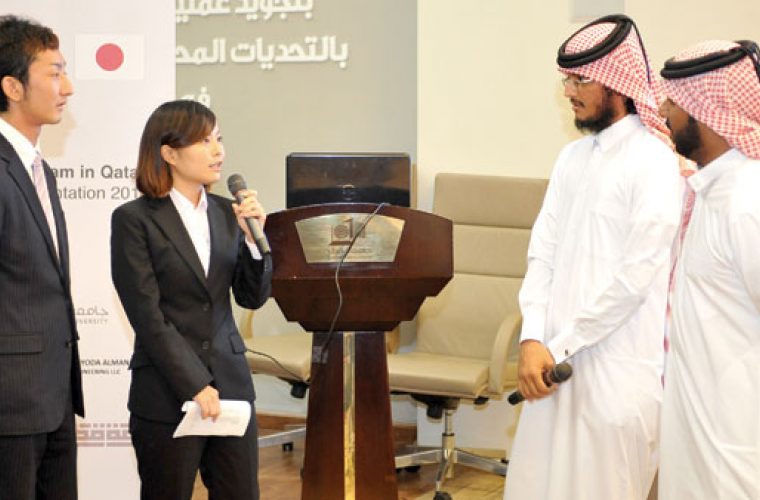 A group of eight Qatari and Japanese students had the chance to work together on a two-week internship programme aimed at further enhancing their skills and providing a broader perspective about the construction industry in Qatar.

Four students from Qatar University (QU) and four from Osaka University (OU) studied the financial aspect and working environment at Chiyoda Almana, an engineering and construction management company in Qatar.

The interns who were grouped into two teams presented their report yesterday during a session at QU in the presence of Japanese ambassador Shingo Tsuda and officials of Chiyoda Almana, OU, QU and the Japanese embassy.

Dr Mazen Hasna, vice-president and chief academic officer at QU, told Gulf Times that bringing students from totally different cultures and different educational systems together to work on a project was one of the biggest achievements of the Coupling Internship Programme.

He lauded the students for their hard work and for generating suggestions and possible solutions to some of the problems of the company. “This is a first-step activity that we should utilise to strengthen the relationship between Osaka and Qatar University,” he said.

QU, OU, Chiyoda Almana and the Centre for the Project to Create Research and Educational Hubs for Innovative Manufacturing in Asia (based in Japan) had signed the agreement establishing the internship programme last month.

Dr Hasna expects more student exchanges and research collaboration between the two universities in the future. He plans to expand their partnership with universities in Japan. Further, he expressed confidence that such a programme
fits well under Japan-Qatar bilateral relations.

While the two countries have strong economic relations, the QU official believes they need to focus more on the educational front.

Ambassador Tsuda echoed Dr Hasna’s statements, citing the successful implementation of the internship programme in the Middle East. “I am expecting this initiative will further grow and last long,” he stressed.

While bilateral ties between Qatar and Japan have been growing steadily (based on trade and energy), Tsuda said they want to expand this relationship into other fields such as culture, education, health, science and technology.

Fahad al-Naimi, a chemical engineering student at QU, told Gulf Times that the programme provided students with useful information about the construction industry in Qatar and how a company like Chiyoda Almana operates. He was a member of one of the teams composed of two Qataris and two Japanese students.

Al-Naimi said it was also his first time to meet and work with Japanese nationals whom he described as hard-working, friendly and kind. “It was an interesting experience. Now, I’m thinking of visiting Japan one of these days,” the Qatari student added.

Shizuka Ikawa, managing director at Chiyoda Almana, expressed willingness to co-operate and support future programmes with QU and OU, especially in enhancing the skills of workers.