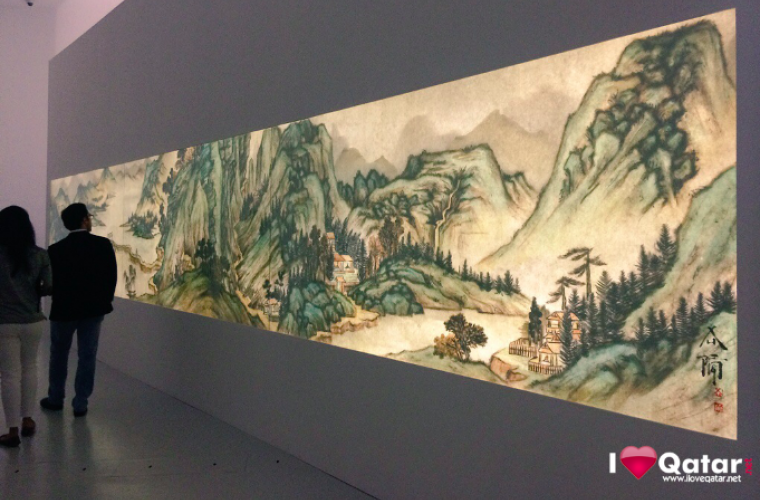 Qatar Museums presents What About the Art? Contemporary Art from China, a major exhibition of 15 contemporary Chinese artists curated by the internationally acclaimed New York based Chinese artist Cai Guo-Qiang. The exhibition will run from 14th March to 16th July 2016 at theQM Gallery Al Riwaq, Doha.

Presented by Qatar Museums under the leadership of its Chairperson, H.E. Sheikha Al Mayassa bint Hamad bin Khalifa Al Thani, the exhibition is the major highlight of the Qatar China 2016 Year of Culture, a landmark initiative developed to deepen understanding between nations and their people through mutual exchanges of arts, culture, heritage and sport.

Cai Guo-Qiang has devoted three years to the curatorial research and development of the exhibition. Artworks exemplifying each artist’s unique artistic language and methodology are displayed in individual galleries, a curatorial approach further highlighting the distinctive creative pursuit of each individual participant. Their diverse bodies of works cross the media of painting, sculpture, installation, video, performance and interactive video game design. The installation includes striking pieces such as Liu Xiaodong’s paintings created on site, part of which is the portrait of the former Minister of Culture’s family representing three generations, a heretofore-unprecedented depiction of a local family by a foreign artist.

Critical reception of contemporary Chinese art has largely been grounded in narratives of Chinese history and culture, focusing on the art market and the artworks’ sociopolitical context. In response to this phenomenon, Cai Guo-Qiang has decided to display a selection of artworks being created by Chinese artists today, with the goal of underlining the individual pursuit of creativity within contemporary Chinese art, and further to re-direct the world’s attention to art and practice. The curator hopes to provide visitors with a powerful and immersive experience, and through a shared appreciation of art, establish a stronger relationship between Qatar and China.

Cai Guo-Qiang remarked: “Neither a retrospective of contemporary Chinese art nor an attempt to summarize its trends and phenomena, the exhibition instead shifts the focus to the creative powers of individual artists. The exhibition is intended to inspire and resonate with young Arab artists who are pursuing creativity and reflecting on their own contribution to global culture. At a time when major exhibitions and biennials are focused on popular topics such as the environment, violent conflict, or on textual analysis of the artists’ cultural identities and the external context of the works, there continues to be a lack of direct inquiry into the art and artists’ practices themselves. The exhibition raises this question to the contemporary art world.”

“Qatar Museums is proud to present What About the Art? Contemporary Art from China in Qatar, which promises to be a hugely exciting exhibition and a major highlight of the Qatar China 2016 Year of Culture.

“By bringing the works of 15 of the most significant contemporary Chinese artists to Doha, we are continuing to deliver our promise at Qatar Museums to inspire, educate and excite the local community about the role and value of contemporary art from around the world and encourage an indigenous culture of creativity, innovation and participation in Qatar.

“We hope that this exhibition helps to not only build bridges between cultures, but also show that Qatar is open to the world and promote improved intercultural dialogue and mutual understanding between the two historic cultures of China and Qatar.”

“We are delighted to welcome Cai Guo-Qiang back to Qatar for a second time, this time as a curator, giving the local community the chance to experience this truly unique exhibition.

“The scale and ambition of What About the Art? is a clear indication of the world class quality of exhibitions organized by Qatar Museums to educate local audiences about international art.

"Showcasing works of art from some of China’s most significant contemporary artists helps not only to bridge cultures, but also to show that Qatar is a truly significant arts and cultural hub.”

The bilateral Years of Culture were started under the guidance of HE Sheikha Al Mayassa bint Hamad bin Khalifa Al Thani in 2012 and designed to take Qatar to the world and bring the world to Qatar. Since it began, the Qatar Year of Culture programme has included Qatar Japan 2012, Qatar UK 2013, Qatar Brazil 2014, Qatar Turkey 2015 and now Qatar China 2016. Many events have attracted significant engagement from the public, with 28,000 people attending the Brazil Festival in Doha in 2014, and 40,000 the Turkey Festival in Doha in 2015.

Over the last eight years, Qatar Museums has presented a series of major solo exhibitions by internationally acclaimed contemporary artists including Luc Tuymans, Etel Adnan, Louise Bourgeois, Mona Hatoum, Damien Hirst, Takashi Murakami, Shirin Neshat, Yan Pei-Ming, Wael Shawky, Richard Serra, Cai Guo-Qiang and Francesco Vezzoli. In addition, QM has exhibited local artists such as Yousef Ahmad and Faraj Daham. QM has also worked to develop significant opportunities for the development of artists in the region, most recently, the Fire Station ‘Artist in Residence’ program, a major new studio and gallery space, providing residencies and mentoring for local artists and perfectly reflecting Qatar Museum’s vision of enriching the lives of all those who live in and visit Qatar and inspiring an indigenous culture of creativity and innovation.

What About the Art? Contemporary Art from China

CAI GUO-QIANG was born in 1957 in Quanzhou City, Fujian Province, China. He currently lives and works in New York.

Cai Guo-Qiang has realized large-scale exhibitions and projects across different geographic locations and cultures. In 2008, his retrospective I Want to Believe opened at the Solomon R. Guggenheim Museum, New York. In the same year, he served as Director of Visual and Special Effects for the Opening and Closing Ceremonies of the Summer Olympics in Beijing. His other recent major projects include: solo exhibitions Saraab at Mathaf: Arab Museum of Modern Art in Doha, Qatar (2011), 1040m Underground in Donetsk, Ukraine (2011), and explosion events One Night Stand for Nuit Blanche (2013), and Sky Ladder off of Huiyu Island, Quanzhou, China (2015).

Cai Guo-Qiang’s curatorial practice includes the Everything is Museum series (since 2000), in which he converted unexpected spaces in Italy, Japan, Taiwan, and Cuba into small-scale exhibition venues for rural communities and small towns. Cai was also the curator of the first China Pavilion at the 51st Venice Biennale in 2005. Since 2010, exhibition Peasant Da Vincis has traveled to Shanghai, Brasilia, São Paulo, Rio de Janeiro, Kyoto and Milan, attracting millions of visitors.

Cai Guo-Qiang was awarded the Golden Lion at the 48th Venice Biennale in 1999, the Praemium Imperiale in 2012, the Barnett and Annalee Newman Foundation Award in 2015, and the Bonnenfanten Award for Contemporary Art (BACA) in 2016. He was among the five artists honored with the first U.S. Department of State Medal of Arts award in 2012.