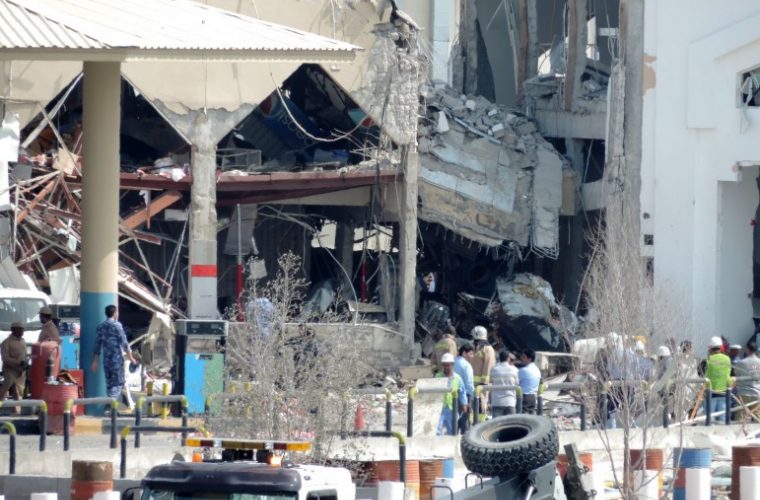 The Ministry of Interior announced findings of an inquiry on gas explosion at Istanbul Restaurant located at a petrol station nearby Landmark Mall on 27 February 2014. The results announced at a press conference held on Monday, 24 March 2014 morning at National Command Centre (NCC) shows that the accident was caused by leaked Liquefied Petroleum Gas (LPG) from one of the pizza ovens at the restaurant which was left open.

In the beginning, Col. Abdullah Al-Muftah noted that the Ministry has conducted this meeting based on its principles of transparency and revealing the facts in front of public opinion.

Assistant director of Capital Security Department and head of inquiry team Brig. Ali Khujaim Al-Adhbi said that role of investigation team formed by the Ministry of Interior after the accident was gathering evidences in cooperation with other security agencies such as Civil Defence, Criminal Investigation and Criminal Evidences and Information. “The team utilized service of experts and technicians of the crime scene for lifting evidence and samples from the scene in the presence of the public prosecution representatives who supervised the proceedings of the investigation” said Al-Adhbi. He added that all the findings of the investigation team has been brought to the public prosecution to complete their own investigations and proceedings.

Replying to a question on number accused in the accident, Brig. Al-Adhbi said that security agencies are responsible for gathering information, and it is not its role to accuse any one. All the information collected from persons involved, witnesses, surveillance cameras have been referred to the Public Prosecution which in turn will decide whom shall be accused according to the findings.

Director of Forensic Lab Department Brig. Hassan Ahmed Al-Obaidly said that the forensic lab experts visited the site soon after the incident and debris of accident were moved to the labs under the Department for further analysis. The findings concluded that blast occurred as a result of a gas explosion caused by a gas leak in a pizza oven, which was left open.

“The gas leak from the open oven filled the restaurant with gas while the restaurant was closed, and with the presence of electric sparks resulting from automatic operation and closure of the electrical appliances at the restaurant led to gas flaring and thus restaurant was exploded fully” Brig. Al-Obaidly said. He further added that the experts have reached on this conclusion and that there was no act of sabotage as nothing was found to prove it.

On his part, director of Operations Department at General Directorate of Civil Defence (GDCD) Brig. Hamad Al-Duhaimi, said that after this incident, the GDCD has taken a series of measures to ensure effective implementation of the law to protect citizens, residents and public and private properties. As part of it, restaurants located at fuel stations prevented from using open flames and they were asked to replace them with electric stoves. The concerned authorities of the Ministry Interior such as GDCD and Public Relations Department has announced through various media on these restriction. He pointed that the Civil Defense has campaigned to make sure that shops are abiding by these safety procedures. Most of the shops responded positively while some of them were closed for not abiding by these regulations.

Brig. Al –Duhaimi stressed on the importance of cooperation the citizens and residents and urged the community to continue in communicating with the Ministry of Interior and report anything that affects safety of people and properties.

On his part, Colonel Abdullah Al-Muftah praised the collaboration between members of the community including citizens and residents and the Interior Ministry, noting that the operating room receive reports and complains round the clock on 999. As well, the Public Relations Department welcomes all type of communications, inquiries and information through its various channels of communication .