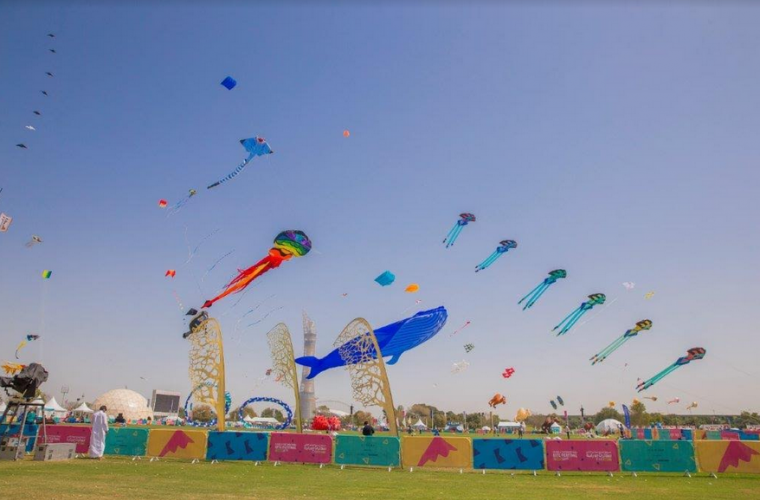 More than 200 colourful and uniquely designed kites filled Aspire Park’s skyline from midday until sunset yesterday, attracting thousands of visitors from all over Qatar on the first two days of the 2nd Aspire International Kite Festival. A larger turnout is also expected over the course of the event, which runs from 06-09 March, particularly as the weekend draws near.

Meanwhile, about 400 school students so far visited the festival’s kite flying workshops on offer. Running from 9:00 AM until 12:00 PM until Thursday, 08 March, in Aspire Park, the sessions comprise various workshops on the history of kites, their various applications, which range from studying the weather to lifting antenna for radio links and pulling canoes across the English Channel, and how kites inspired modern-day drones.

To ensure visitors have every opportunity to fully experience the festival, Aspire Zone Foundation (AZF) has also set up kite stalls, selling more than 750 kites on the first day of the festival alone.

For the first time ever, Qatar has brought together a number of local and expatriate community members to represent the country in the international kite flying competition. The team demonstrated a remarkable kite design that bears the image of HH The Emir, Sheikh Tamim bin Hamad al-Thani and, HH the Father Emir, Sheikh Hamad bin Khalifa al-Thani.

Representatives from the Qatari team expressed their delight at participating and dedicated their appearance to HH the Emir and Qatar’s local and expatriate communities. They added that they hope to represent Qatar proudly and leave a memorable mark on the festival.

AZF has designed a friendly inter-school competition to introduce children to the sport of kite flying, where teams representing 16 local schools vie for cash prizes: 50,000 QAR for first place, 30,000 QAR for second and 20,000 QAR for third place.

Along with the International Kite Festival, AZF, in collaboration with the Qatar Photographic Society, launched a photography competition for amateur and professional photographers in Qatar. Entrants can compete by posting their photos on social media under the hashtag #AspireKiteFest for a chance to win valuable prizes and the honour of being crowned the 2018 Aspire International Kite Festival Photography Competition winner.

The first place winner of the 2018 Aspire International Kite Festival Photography Competition will win a 20,000 QAR cash prize; second place will win a business-class plane ticket to a destination of their choice; third place will receive two economy class plane tickets; while fourth and fifth places will each receive a professional camera.

A poster competition has also set children aged between of 5-13 the challenge of drawing the best illustration of a kite in the skies above Aspire Park for a chance to win valuable giveaways from Virgin Megastores.