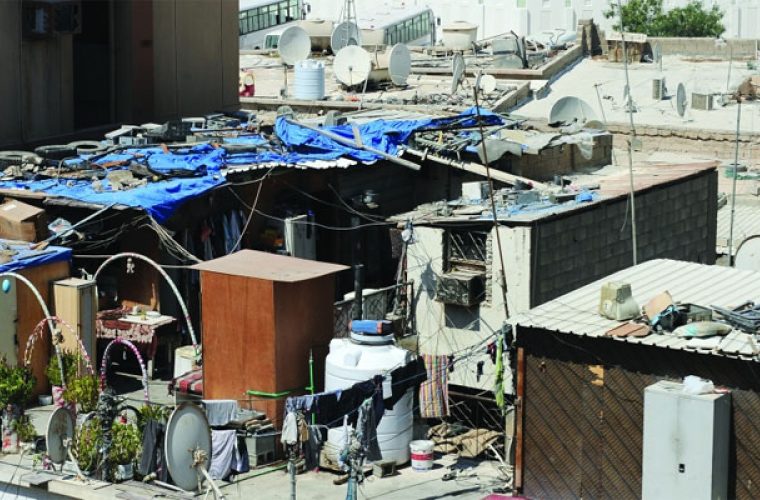 Haphazard construction on top of buildings and dumping of old, and sometimes potentially hazardous, goods in residential compounds pose a serious safety threat, say residents of neighbourhoods in Najma and surrounding areas.
Such phenomena, which are common in these areas, could be responsible for accidents such as fires, the residents argue.
Recently, a fire broke out in a mixed-use complex housing 10 flats and five shops in Najma. Thanks to the timely and swift intervention of Civil Defence personnel, the fire, which broke out around midnight, was put out quickly and prevented from spreading.
It was later learnt that someone had dumped an old mattress on a synthetic water tank on the ground floor of the premises. It was suspected that someone had hurled a cigarette butt or some other inflammable item on the mattress and this led to the fire. The temperature was also "very high" that night, said sources.
The fire was first spotted by a grocer in the neighbourhood while he was closing his shop at the end of the day. He then raised an alarm and alerted the residents.
Shopkeepers said portacabins made of cheap material could often be seen on top of buildings, particularly old ones, in the area. Such practices pose a major threat to not only the buildings where portacabins are installed but also to neighbouring houses and other establishments.
Most of these portacabins, it is understood, are made of poor-quality crushed wood or "sandwich panels", both of which are vulnerable to fires. The threat is greater in scorching conditions like the one experienced in the country of late.
While "sandwich panels" are suitable for places with a cooler climate, they are not the best option in this region due to the high temperatures, say experts. However, many real estate contractors prefer "sandwich panels" here as they want to lower costs by using cheaper material.
Another cause for concern is the quality of electric wiring at many places, particularly in the numerous old buildings found along the lanes and alleys of Najma.
Poor wiring has contributed to fires on many occasions, it is understood.
The residents have urged the Civil Defence authorities to conduct raids on premises where unauthorised construction is rampant.
Dumping of old and discarded furniture and other household appliances on rooftops is also a matter of grave concern, residents said.
In some cases repairmen dump old materials on the rooftop as they don't want to carry these items to the ground floor of multi-storey buildings and safely dispose them. Some times the residents themselves use the rooftop as a storehouse to keep some of their old items, hoping to retrieve them in future if they needed it.
"Whatever may be the reason, such dumping of furniture and other items on rooftops is a safety and health hazard which must be certainly curbed," residents said.