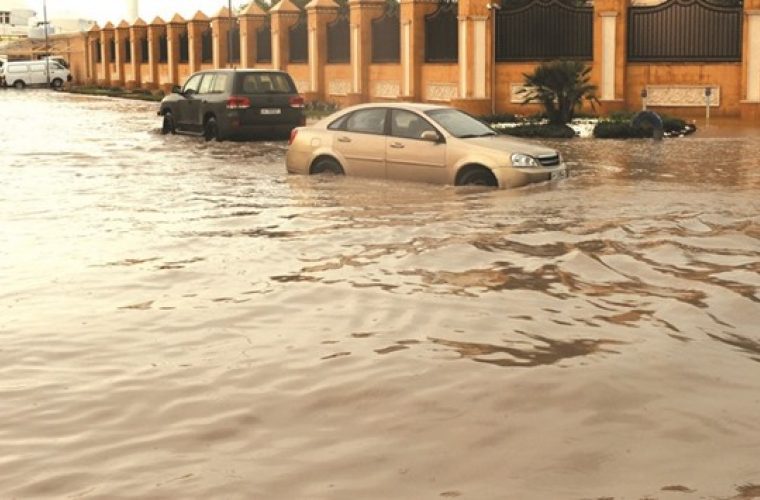 Doha and other parts of the country received heavy rain yesterday and more thundershowers are expected today.
The downpour led to waterlogging in a number of areas, resulting in slow traffic on key roads in and around the capital.
Chances of rain will continue until this evening, and will be light to moderate in intensity throughout the country, the Qatar Met department tweeted last night.
The latest spell of unstable weather in Qatar gathered momentum around midnight on Friday, when lightning lit up the night sky - accompanied by thunder and heavy rain.
Pictures and images of the lightning and thunderstorm circulated fast on social media, as people expressed amazement at the dazzling display.
The rain again picked up a little after yesterday noon, and soon started coming down heavily. Roads around the city and elsewhere were flooded as a result of the downpour, even as efforts were stepped up to remove the rainwater.
Today, thundershowers are again expected in the country along with strong winds, the Met department has said. Similar conditions and high seas have also been forecast in offshore areas.
The wind speed may go up to 28 knots offshore and 25 knots in inshore areas during thundery rain.
The detailed forecast says cloudy conditions will prevail in the country and scattered rain is expected, which may be thundery in some places. Offshore, it will be hazy and cloudy and scattered rain is likely there as well, which could be accompanied by thunder. The sea level may go up to 12ft during thundershowers.
A minimum temperature of 19C is likely in Ruwais and Abu Samra today, while in Doha it will be 22C. The maximum, on the other hand, will range from 22C to 26C in the country.
Meanwhile, sources at the Met office attributed the extended rainy season to changes in the climatic cycle and one of them felt it was not unusual as there had been severe rain in other parts of the region during this period over the past 2-3 years as well.
The Ministry of Municipality and Environment, on its part, published a list of emergency numbers across all municipalities in Qatar that people could call with requests to remove rainwater. The list is available on its Twitter page.
The Ministry of Interior advised motorists to drive cautiously in the rain while the Met department listed ways to stay safe during thunderstorms.
Qatar Airways, too, issued a statement on the impact of the weather on flights.
While there were reports of waterlogging in Doha and some neighbouring areas yesterday, things were particularly bad for people living in the densely populated Doha Industrial Area as muddy water entered their compounds.
Equally poor was the conditions of roads on the eastern side of the area where flooding occurs regularly after a spell of rain. Many drivers of goods vehicles found it difficult to move through the flooded roads, which were already in poor condition, it was found.
Though road strengthening and re-carpeting are under way in parts of the Industrial Area, a number of roads there, particularly on the eastern side, are in particularly bad shape.
Agencies involved in clearing water have already been deployed and are expected to remain busy for a while, say sources.


Some flights affected: QA
Qatar Airways yesterday issued a statement in view of the heavy downpour and its impact on flights. “Bad weather in Doha is affecting some flights in and out of Hamad International Airport. We sincerely apologise for any inconvenience,” the airline said.
“As always, the comfort and safety of our passengers and crew is our utmost priority,” it stressed. “All efforts are being made to minimise disruptions and ensure seamless travel for passengers where possible.”
The airline advised passengers to check their flight status on the Qatar Airways website, at http://bit.ly/2nhsh6x