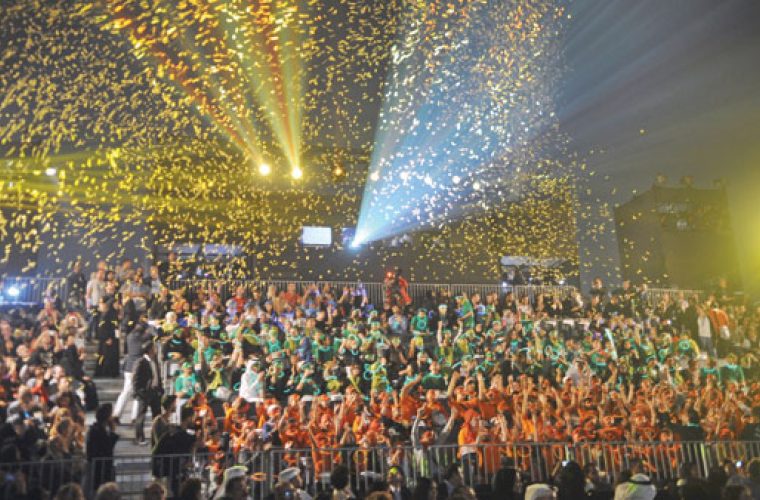 Ajyal Youth Film Festival, presented by Doha Film Institute (DFI), drew to a close yesterday with the screening of the Japanese movie Garden of Words and an impressive awards ceremony. Complementing the festival was the Otaku Anime Exhibition that drew eager fans, curious art lovers and interested spectators to Katara - the Cultural Village. The overwhelming response to the exhibition proved that when it comes to anime fans, Qatar is ahead in the league. The winners of the Otaku Cosplay competition were honoured on the closing day. Participants, who dressed up as their favourite anime characters from a movie or cartoon, were judged on craftsmanship, originality and choreography. The winners were Saud al-Hazzani (Best Male), Unique Canonicato (Best Female), Family of David Duerden (Best Group), Yafe al-Yafi (Best Open) and Jassim al-Manai (Best Kid). They received a voucher courtesy of Fifty One East for the much-anticipated Sony PlayStation 4, launching in December. Abdullah al-Mosallam, the key curator of the exhibition, said: “The event truly brought out the inner creativity of Otaku fans. This was particularly evident in the Otaku Cosplay competition, which awed the spectators. The exhibition will go a long way to further promote the art of anime in Qatar and the region, and the possibilities are indeed endless.” Talented local artistes Fatima Alnesf, Kholoud al-Ali and Abdulaziz Yousif, among others, worked alongside an array of cultural institutions and organisations - including AnimeQtr and Qatar Japan Youth Association - on the various activities related to the exhibition. Qatar-based collectors of dolls, statues, action figures and memorabilia took part in the event by showcasing their much-valued possessions. The traditional Japanese chess game of Shogi, a 90-minute Qartoon workshop that demonstrated the use of iPads as an artistic tool in creating an artwork, a tutorial on stop-motion animation and origami and an exciting Instagram Hunt, where fans were to track down anime “super-villains” to help Ajyal superhero Otaku Man, drew enthusiastic participation. The winners of the 48-Hour Film Challenge were also announced. This DFI initiative got teams of aspiring filmmakers from Qatar scripting, shooting and editing their film and telling their story - from start to finish - in just one weekend. The winners of the challenge were Jude Keirouz, Ghassan Keirouz, Pascale Abo Jamra and Karl Salameh for the film Jude and Hisham Madayi, Mubeena Hisham, Fayaz Abdul Salam and Saheer Abdullah for Somewhere in Gaza. They received video equipment that would help them in their future projects. Their films were also chosen for the Made in Qatar programme at the festival. Earlier yesterday, a panel discussion on “Media Violence and Our Children” was also held that saw the participation of many regional artistes. The films that were screened yesterday included When I Saw You, Zip & Zap and the Marble Gang, Flying Paper, Kauwboy, Wajma and The Pee Wee 3D: The Winter that Changed My Life. Winners of the Doha Film Experience, who were evaluated by hundreds of young jurors aged eight to 21 years, were also announced yesterday. According to the DFI Twitter feed, the “Made in Qatar” Best Film Award went to My Hero, which was directed by Nora al-Subai. The best feature film in the Hilal category went to Regret, which was directed by Dave Schram. Also, the best short film (Hilal) went to The Invention, directed by Giovanni Granada. http://www.gulf-times.com/qatar/178/details/373268/glittering-end-to-ajyal-film-fest