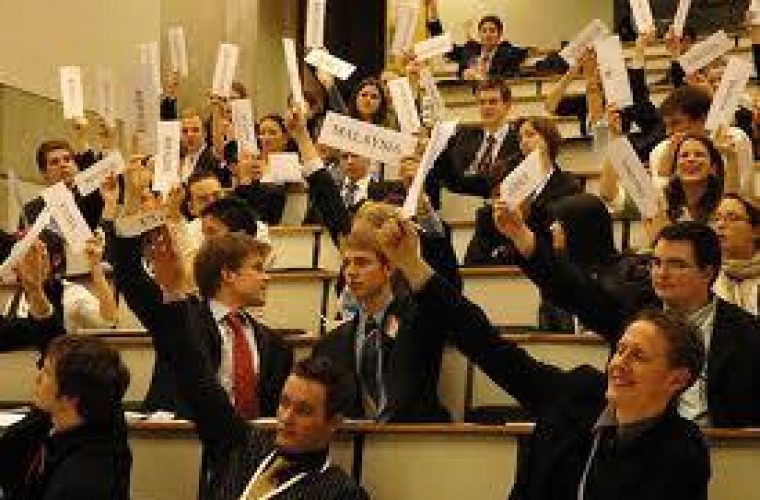 The 8th annual Model United Nations (MUN) conference hosted by Georgetown University School of Foreign Service in Qatar (SFSQ) held their final closing ceremonies at the Qatar National Convention Center, ending three days of intensive and transformative dialogue and debate for hundreds of participating international high school students. Qatar, Bahrain, the United Kingdom, China, Switzerland-over 25 countries in all-were represented at Georgetown's MUN, an academic platform for young people who take on the roles of UN delegates, and face the same challenges faced by world leaders in response to current global issues as reported by Qatar Chronicle. MUN conferences are held in various schools throughout the year. However, Georgetown SFSQ MUN participants had the added privilege of assuming the roles and responsibilities of UN delegates in the same venue, the QNCC, that actual United Nations events have taken place. At the opening ceremonies, Gerd Nonneman, Dean of Georgetown University's School of Foreign Service in Qatar, told the students that "there is no better way to get to the heart of issues than to immerse yourself in the actual debate", an immersion made more real since students would be "in an extraordinary building that has been the site of the latest UN climate change negotiations, so you'll be working in the very same environment that the UN worked in the highest places." The opening ceremonies also included a keynote address by Dr. Charles King, professor of International Affairs and Government at the Washington D.C. Georgetown campus, who set the stage by telling the young gathering "You are a model for what the UN should be, not just the model of what it is." Urging students to consider the history and challenges of the UN's global security mandate through the lens of this year's theme, he said "you will meet other men and women from all over the world here in Qatar-a country that has embraced the new world economy and world societies. Study this all under the broad umbrella of sustainability." Human rights, pollution, the debt crisis, and standards for intervention and the case of Syria, represented just a few of the topics on both the real and model UN agendas. A student from a U.S. high school noted that "I was impressed by the creative ideas put forward at this MUN. This is the second time I participate, and this one was more professional, the delegates were more knowledgeable, the debates more intense." Chairing each committee were SFSQ university students, who played exemplary roles in ensuring respect to proceedings, including voting processes and debate guidelines. Student participants of the Georgetown MUN had the added advantage of an enhanced diplomatic experience through the Georgetown SFSQ open house and Diplomatic Reception, where they had the opportunity to engage and discuss the role and responsibility of diplomacy with the ambassadors of India, South Africa, and the UK. Commenting on Georgetown SFSQ's MUN, the Charge d'Affaires and head of mission of Singapore, Mr Syed Noureddin, said "It is refreshing to have youth with such enthusiasm and energy engage on such issues. This showcases Qatar's understanding of the value of education and investment in human capital development." Qatar Chronicle