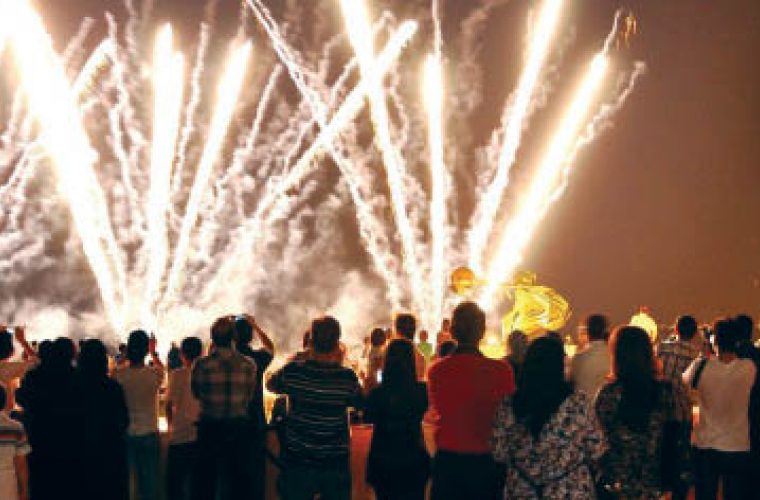 For the last three years, Alvin Cruz and his family have been visiting Katara to watch the fireworks display organised by the Cultural Village for tourists, citizens and residents during Eid Al Fitr.

The breathtaking pyrotechnics, shown nightly during the week-long celebrations, attract thousands of people to Katara every year.

“The fireworks display in Katara is stunning and my kids love watching it, and I love taking photos of the colourful show,” said Alvin.

This Eid, however, visitors to one of the major tourist destinations in the country will not get to see the pyrotechnics as Katara has announced it is cancelling all its Eid Al Fitr activities in solidarity with the people of Gaza, who are suffering due to an Israeli military offensive.

The offensive, which is in its third week, has left more than 800 Palestinians dead and thousands more injured.

Souq Waqif has also announced that it has cancelled some of its Eid Al Fitr events out of respect for the victims of the Israeli attacks.

The big music concerts it used to host nightly during Eid Al Fitr will not be held this year, it said. In recent years, the concerts have featured well-known Arab singers and attracted thousands of music lovers.

However, other activities aimed at children would still be held in Souq Waqif from the second to the fifth day of Eid.

A circus tent would be erected on Al Ahmad field, in front of the Gold Souq, and a Ukrainian circus troupe would perform there.

A tent for entertainment and other activities would also be erected and it will host carnival shows, face painting, hoppers, skill-based games and a moving train, among other things.

The entry fees for the circus tent are QR50 (general) and QR100 (VIP), while the entry fee for the activities tent is QR20.

Despite the cancellation of some events at the two major tourist destinations in Doha, Eid Al Fitr is expected to have its usual lustre, with many other events lined up for the occasion.

Qatar Tourism Authority (QTA) is collaborating with more than 10 companies and organisations under its ‘Eid in Qatar’ programme to make sure that there are enough activities and events to attract tourists from neighbouring countries as well as residents and citizens. The diverse activities are aimed at people of all ages and backgrounds.

The Pearl Qatar is hosting an Eid festival from 6pm to 10pm on the first three days of Eid. The activities and events for children and families can be enjoyed for free at The Pearl Qatar’s Porto Arabia parcel 9 and 10.

For those who wish to see traditional Qatari shows, the Ministry of Culture, Arts and Heritage is staging events free for the public at the Heritage Village in Al Bidaa Park.

For adrenaline junkies aged 18 and above, Qatar Air Sports Committee is organising paragliding tours near the Sealine Beach Resort roundabout. The aerial adventure, which can be enjoyed from 3pm to 6pm on the first five days of Eid, will cost QR250 per trip per person.

Qatar Shooting and Archery Association will hold shooting practices in the afternoons on the first five days of Eid. This activity will be held at Lusail Shooting Club on Al Khor coastal road for those aged 18 and above, with a fee of QR100 for 25 shots.

The Aqua Park will welcome visitors to more than 15 attractions on its 50,000sqm entertainment facility. It will open from 3pm to 6.30pm on the first five days of Eid. The entry fee is QR130 per person.

Tours of the Muhammad bin Abdul Wahab Mosque and the Sheikh Faisal bin Qassim Al Thani Museum are also being organised free for the public.

The Al Dosari Zoo and Game Reserve will be open to the public from 4pm to 7pm from the second to the fifth day of Eid.

‘Eid in Qatar’ was launched to promote the country as a preferred tourist destination in the region during the festival. For this, QTA launched a GCC-wide advertising campaign to publicise the Eid events and activities in the neighbouring countries.

Last year’s Eid festival saw a significant increase in the number of visitors from the five other GCC countries, from 24,579 in 2012 to 75,086 last year.