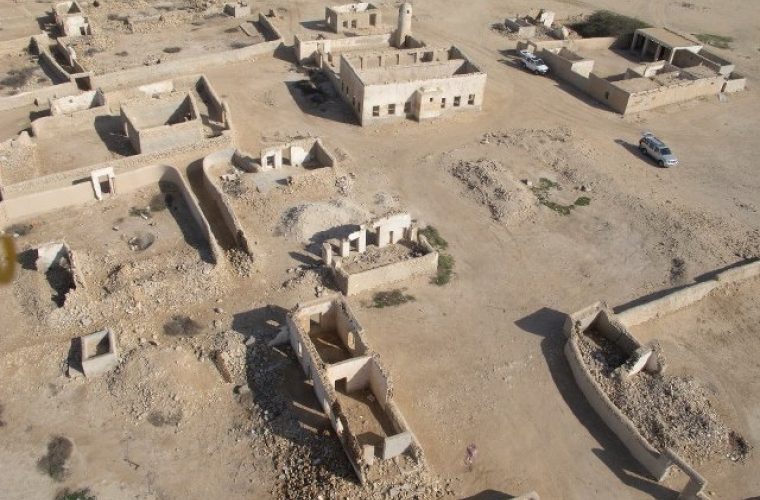 In an exciting conclusion to this season of research, archaeological excavations in northwest Qatar have revealed a total of four previously unknown burials, dated to over 5,000 years ago, at Wadi Debayan, an important site with human occupation dating back to nearly 7,500 years. Gulf Times reported in May last year the discovery of the first unmarked prehistoric burial at the historic location, situated on the northwestern side of Qatar to the south of the site of Al Zubara and the Rá’s ‘Ushayriq peninsula. “We believe we may now have three further burials located close to the first burial, which was found to be the remains of an adult woman. The burial was in a very poor condition, and much of bone had turned to sand. However we do know that she was very strong and over 6ft tall,” Qatar National Historic Environment Record (QNHER) Project co-director Richard Cuttler told Gulf Times during a recent site visit. The exploration of Wadi Debayan, conducted under the QNHER Project, is being developed as part of a joint initiative between the Qatar Museums Authority under the guidance of Faisal al-Naimi (head of antiquities), and the University of Birmingham, where Cuttler is a research fellow. “The body was in a crouched foetal position, lying on its right side, with the left arm over the right arm,” explained Áurea Izquierdo Zamora, an archaeologist who has worked at the site as a surveyor and area supervisor since February 2012. The researchers believe this to be the remains of a woman, based on the very curved pelvis and certain characteristics of the visage, such as a soft chin. It is also estimated that she was in her 30s or 40s. Large fragments of distinctive Jemdet Nasr pottery were found inside the grave. This pottery dates to the early Bronze Age and suggests the burial is contemporary with a midden that was discovered approximately 20 metres to the west. “We know so little about the late Neolithic or Bronze Age people in this area, and it is fantastic that we have the opportunity to understand who this lady was, where she was from and the life she lived,” Zamora said. “The condition of the bones is really very bad, and while we have taken samples for radiocarbon dating, we cannot be sure that enough organic material has survived for this to be successful,” she said. “The body is covered completely with a very thin sandy material that is sealed with the gypsum originally dug from the grave. This makes it very difficult to identify the grave as the top layer gets assimilated with the natural soil,” the archaeologist observed. All the graves discovered so far at Wadi Debayan were made in the same way. They were dug past the natural gypsum layer, usually found at a depth of around 40cm, and the bedrock. Armed with the information from the first grave, the researchers searched for gypsum crystals at a depth of 20cm in a nearby area, for indications of re-deposited soil and came across three other oval shaped pits, which are also likely to be burials. Peter Spencer, site supervisor for Wadi Debayan excavations, said the team is keen to do DNA and Strontium87/86 analysis of the bone fragments from the graves, not only to look at the genetics and ancestry but also to understand early migration patterns and the links between late Neolithic and early Bronze Age groups. “Looking at prehistoric Arabian archaeology, we are really interested to find out where the people settled in these areas came from, whether they were from Levantine areas, or from Yemen or other parts of Africa, or other areas of the Gulf,” he added. The only other site in the Gulf similar to Wadi Debayan is the one at Jebel Al Buhais in Sharjah, the UAE. “There they had similar Neolithic cemeteries with no surface markers,” Cuttler recalled. Wadi Debayan, one of the earliest Neolithic-Chalcolithic sites in the Gulf, has beneath its surface some of the earliest known structures in Qatar, and is one of only a few known sites of this period. The extent of human inhabitation was revealed during the summer of 2011 when radiocarbon samples from different parts of the site demonstrated extended periods of occupation between 7,500 and 4,500 years ago. It is still unclear if this represents the same people or if occupation was continuous or seasonal. The newly-found burials will not be excavated this season as the archaeologists are winding up field work on account of the scorching summer, however they are planning to continue excavations next winter. Source : Qatar Chronicle