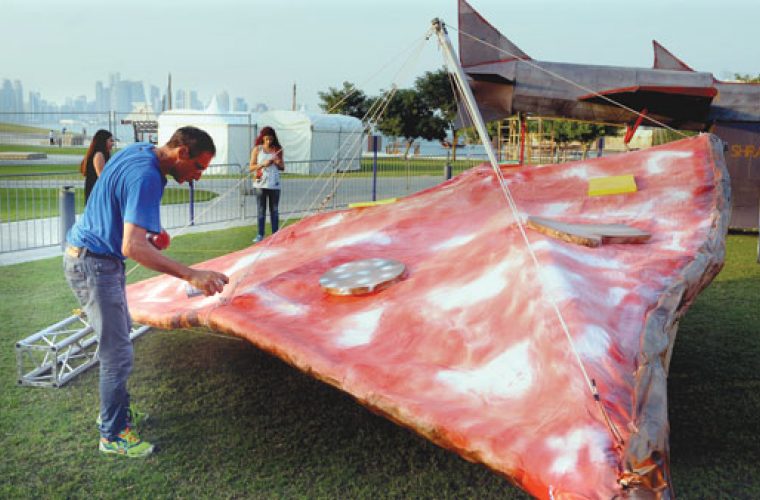 Innovative and wacky flying machines of varying sizes and shapes, made from many kinds of items, are receiving finishing touches in preparation for the first Red Bull Flugtag in Qatar scheduled for Friday at the Museum of Islamic Art Park. The event, from 1pm-5pm, is being held under the patronage of Qatar Museums Authority chairperson HE Sheikha al-Mayassa bint Hamad bin Khalifa al-Thani. In all, some 35 teams, each comprising four members, including a pilot, will attempt at flying their machines over the water as a crowd watches. Each team has chosen a unique design either based on a hobby, animals, popular food, movie hero and even a Land Cruiser. Their ideas for the flying machines range from Italian pizza to Ghutrah (Khaliji traditional headdress), old-fashioned Trojan horse, superheroes, 2022 Football World Cup, Qatari falcon, camels and lawn tennis among others. Around 15 teams were yesterday seen busy assembling and checking out their equipment just to ensure everything is in order. Some of the teams including teams Flying Pizza, Bat Brick and Falcon that spoke to Gulf Times shared their experiences building the machines and why they were taking part in the event. “I used to get very excited watching Flugtag events when I was younger, and now at 52, I’m able to participate in one, it is very exciting for me,” team Flying Pizza pilot Antonio said. The team comprises three Italians – Antonio, Sebastine, Luigi and one Filipina - Catherine. He explained that the group got their inspiration from Italian pizza, saying: “Because, Italian pizza is the only cheapest food that has a shape of an object that can fly, so we decided to base our project on that and we have been working on it since mid-June.” According to Antonio, the ‘pizza’ is made of plastic water bottles taped together underneath a large spread of old newspapers that are glued and wrapped with a wide fishing net and then supported by PVC pipes. The flying machine, which now looks like a paraglider at 7.5m by 4.5m wide, will be launched on a base made of plyboards with fishing net and paper wrapped and glued around it. Team Falcon from the Renaissance Hotel, as the name implies, has built an aircraft resembling a falcon out of paper, aluminium frames, canvas, fibre plastic glass and bicycle tyres. “It took us around two months to build this machine and we chose the name falcon as the bird’s wings is the inspiration for our hotel’s architectural design,” explained a hotel representative. Chris, Scot, Abdul-Akeem and Katrina are the team members. The Bats Brick team, comprising Andre Fourie, Erman Dulgerler, Gokhan Sahin and Vilma Ferraudo, has made a futuristic fusion of classic superhero action parody mixed with classic non-functional design. The machine is made of papier-mache, a lot of glue, anti-slip bath mats, artist’s paint palettes, smaller parts of earth mover, a pail and washers. “We just wanted to bowl something we can propel like a rocket by creating this machine and wings don’t equal aerodynamics. It is based on the batman theme, and the idea came all the way from South Africa,” Fourie explained while mentioning that most materials used for the project came from his kitchen. The Flugtag competition is being organised in collaboration with main sponsors Ford, event management agency Innovations Unlimited ME, Qatar Museums Authority and the Museum of Islamic Art as the host venue in addition to Renaissance Hotel. http://www.gulf-times.com/qatar/178/details/370112/flying-pizza-and-camels-set-for-first-flugtag-contest