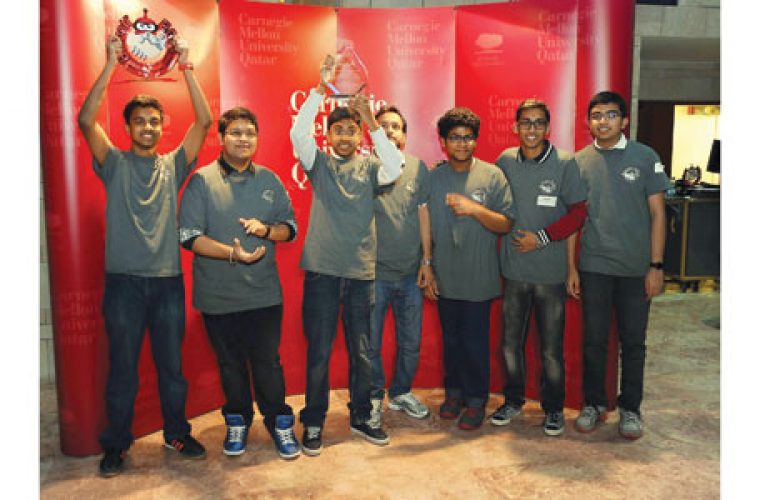 The team bested those from 21 schools from Middle Eastern countries to be declared overall champion after an exciting final round. Over 200 students from Qatar, Kuwait, Egypt, Libya and Oman took part.

“It’s glorious! We have absolutely no words to express our feelings. This is the first time our school has been declared the overall champion. We have never been this satisfied in our lives winning a tournament like this. It’s been a great experience,” said Yogesh Parthasarathy, one of the team members.

Inspired by the win, most team members plan to pursue a career in the field of robotics, he said.

They will travel to Los Angeles, California, in July for the 2014 Global Conference on Educational Robotics and meet middle and high school students, robot enthusiasts and professionals from around the world and compete in the 2014 International Botball Tournament.

The Botball is a robotics competition for secondary school students in the region to develop knowledge and practical understanding through hands-on experience with science, technology, engineering and maths.

Qatar is the first country outside the US to host a Botball challenge. The Qatar event was inspired by a US Botball programme developed in 1993 by KISS Institute for Practical Robotics. The programme introduces students to the world of robotics, equipping them with skills and experience to design, build and programme autonomous robots using ‘C’ – the most widely used programming language in industry and academia.

Students participated in a workshop this January and were introduced to the Botball Programme and the 2014 challenge. They were taught basic programming, design and building techniques of the robots to prepare them for the competition. After they finished the workshop, they were given nine weeks to prepare for the contest.