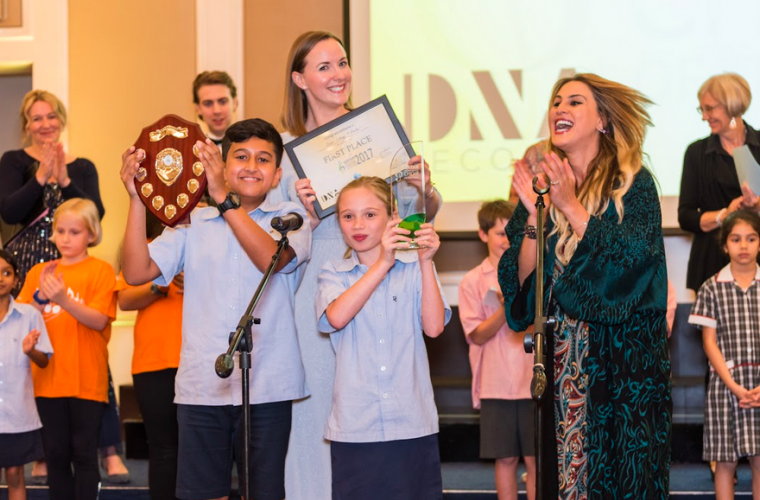 The Grand Finale of ‘Qatar Primary School Choir of the Year’ competition (QPSCOY) was held on Monday 15th May at the Ballroom of the Shangri-La, Doha.

The evening, hosted by Mr Kamahl Santamaria, was the culmination of two years’ work by the QPSCoY Committee, and was the vision of Mrs Alison Keane, Head of Primary Music at Doha College and supported by Doha College and sponsored by Shangri-La, Doha and DNA records.

As well as singing their own pieces, each choir also performed their unique interpretation of a song called ‘Wings of the Falcon’ which was composed specifically for the final by Dana Al Fardan QPSCOY’s ambassador.

The adjudicators had a very difficult task with all choirs performing to an amazing standard. Eventually, Doha College ‘Fortes’ were declared the Qatar Primary School Choir of The Year 2017 Winners. Conducted by Laura Wells and accompanied by Alison Keane, ‘Fortes’ performed “I Wish I Knew” by Billy Taylor. ‘Fortes’ choir are made up of students from Year 4, Year 5 and Year 6 and even some younger Year 3 children who practice weekly.

Second place was awarded by the judges to the ’Presto’ choir also from Doha College with their performance of Toy Story’s “You’ve got a Friend in Me” by Randy Newman.

In third place singing “Diamonds” by Rihanna were the choir from Newton British School, who refer to themselves as a “small school with a big voice.”

As well as trophies and medals, all schools competing in the final won a workshop to hone their skills with choral music specialist Mr Greg Beardsell who is Musical Director and Conductor of the Royal College of Music Chamber Choir and Musical Director of the Cross-Border Orchestra of Ireland.

‘I was delighted to be approached by the QPSCOY team,” explained Greg, “in my experience dealing with children of a primary age, you see so much of their imagination coming through in the music and the performances. I was surprised to see how much high-quality choral music was being achieved in Qatar. This competition is a great way of allowing school choirs to see each other perform and to learn how to make their standards of singing even higher. This competition was an incredible shared experience and a celebration of music, and I have been delighted to be a part of it.”

Attending the Grand Finale, Dana Al Fardan, QPSCOY’s Ambassador and composer of the set piece ‘Wings of The Falcon’ commented “it has been wonderful to work with the teachers and students throughout this competition; what an incredible inaugural festival. It takes tremendous courage to stand on stage and perform. I have a dream to make Qatar a hub for music and musical talent, this competition certainly encapsulates this for me.”

While the judges deliberated, the audience at the Finale were treated to two incredible performances by the Doha Youth Choir who performed Star’ by E Esenvalds and ‘Alice’ by S Quartel conducted by Ms Alena Pyne and accompanied by Ms Sonja Park.

Head of Primary Music at Doha College, Mrs Alison Keane who initiated the competition summarised the event “Shortly after arriving in Doha almost seven years ago; a vision began to evolve. That vision has, today, come to fruition. Music and singing feed my soul, and my passion is to enable children to experience the same deep reassuring warmth of how that manifests itself. I would like to thank all the schools for participating with such enthusiasm, the team who helped to organise the event, the independent adjudicators for their expertise, our sponsors for their support, and of course the children. I look forward to the QPSCoY Competition growing year on year and bringing singing to the lives of future generations.”