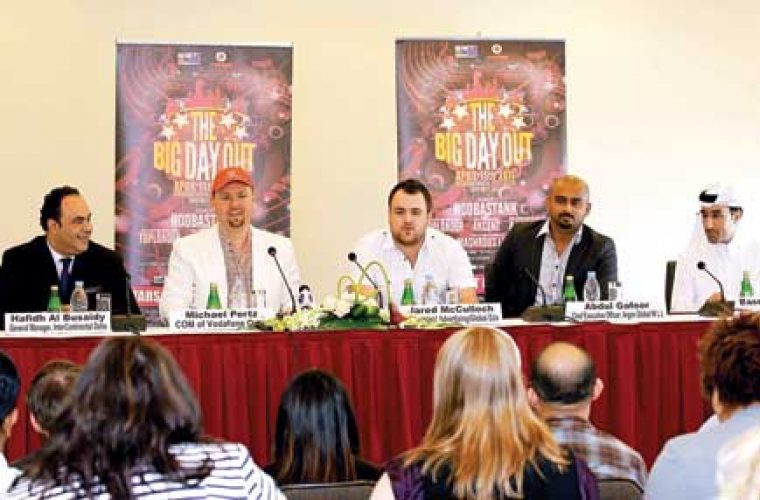 Over a dozen international and local artistes are set to enthrall thousands of Doha fans for a two-day musical extravaganza called ‘The Big Day Out’ considered the biggest live music event in Doha so far. “The Big Day Out is the first music festival in Qatar and the biggest live music event ever staged in Doha in terms of talents,” said Jared McCulloch, CEO Finland Advertising/Global DJs, co-organiser of the event. McCulloch said through the event, they are creating a new concept which can even be bigger in the future depending on the response from the public, which is at the moment very positive. “This event is organised to offer a multi-genre musical entertainment so people will enjoy different music and varied performances,” he said. World-famous LA-based band Hoobastank leads the pack of acclaimed talented international musicians including Toploader, Akcent, Aswad and Mashrou3 Leila at the concert to be held on April 14 and 15 at the Intercontinental Hotel Beach. Music personalities known in the local circle will add to the excitement of the two-day concert as they showcase their talents and share their music. They include Tarek Sidani, United Rhythm Band, The Exiles, Keyali Mayaga, Green Color Thing, Trak, Lorelei Loveridge and Cronkite Satelite. McCulloch said though the event features a host of internationally renowned musicians, it also fully supports the promotion of Qatar-based musicians and that the show could open more doors to stage more events for them to be recognised. Over 6,000 people are expected to attend the show which will start at 2pm until late, another new concept introduced at the event. While the first day of the event will be open to all ages and will feature some of the artistes including additional entertainment such as magicians and jugglers, the second day will be the highlight since it will see the performances of all the artistes. Ticket price for April 14 is QR200 with free entry for children below 12 years old. For April 15 ticket is priced QR250. More information at iloveqatar.net/bigdayout Part of the revenue will be donated to the victims of the recent calamity that struck Japan. Also present at the press conference were Hafidh Al Busaidy, General Manager of InterContinental Doha; Michael Portz, Chief Marketing Officer, Vodafone Qatar; Abdul Gafoor, CEO Argon Global and Bassam Al Ibrahim, CEO, I Love Qatar. http://www.thepeninsulaqatar.com/culture/147390-big-day-out-planned-for-music-fans.html