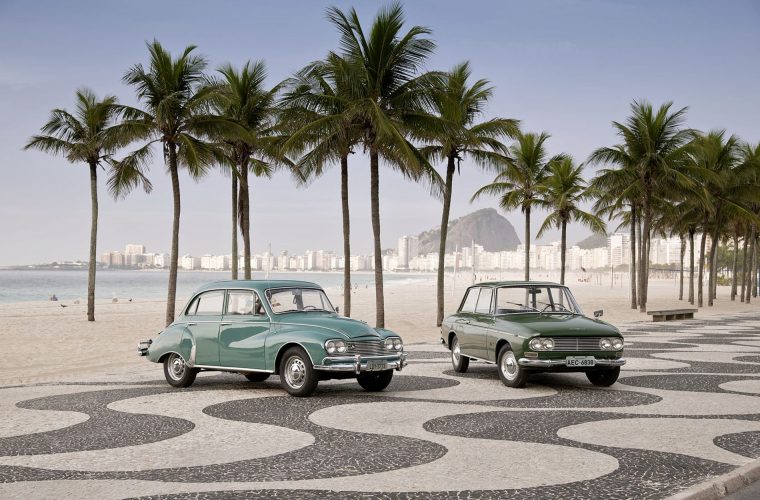 When the Brazilian football team first won the World Cup in 1958, South America’s largest and most populous country was at the dawning of a new era. Football star Pelé rocketed to fame, the architect Oscar Niemeyer designed the new capital city Brasilia as a modern utopia, and the bossa nova sound spread all over the world from the Copacabana. How Auto Union GmbH from Ingolstadt accompanied this new dawn with its DKW cars is illustrated in the latest special exhibition at the Audi museum mobile: “Ordem & Progresso – DKW VEMAG and the new dawn in Brazil” (open until September 21, 2014). “Order and Progress” is the official motto of Brazil.

Did you know that DKW models were also built in Brazil? That DKW was the car of the Brazilian middle class in the 1960s, and is still highly regarded today as the only Brazilian brand? That Pelé won the World Cup at 17, but only took his driving test at 18 in a DKW? That motor racing legend Emerson Fittipaldi wrote off his parents’ DKW at the age of 12 while on a family outing, before going on to win the first motor racing triumph of his illustrious career in 1966 in a DKW GT Malzoni? That when Brasilia was built, at first only DKWs were allowed to operate as taxis? Or that the last DKW car was built not by Auto Union in Ingolstadt, but in 1967 at VEMAG in São Paulo? The exhibition addresses these and many other questions about DKW in Brazil.

The car played an important role in taking Brazil along the path to prosperity.Most cars were imported from the USA, but also from Germany. Volkswagen supplied the Beetle, and Auto Union the parts for local assembly of the DKW F91 Universal in Brazil. Soon Veículos e Máquinas Agrícolas S.A., or VEMAG for short, was building DKW cars from scratch in São Paulo. The models went by the names of Candango, Belcar and Vemaguet, and sold well. By the mid-1960s VEMAG was the third-biggest player in the Brazilian car market. 109,343 DKWs were delivered in total. VEMAG even created its very own model, combining German technology with Italian design: the DKW Fissore. Genaro “Rino” Malzoni provided a touch of Brazilian exoticism. Taking the shortened chassis of a DKW as his basis, this plantation owner and car enthusiast designed a snappy sports car – the DKW GT Malzoni. Only 35 were ever built, including the specially assembled motor sport models.

In 2007 Audi Tradition established contact with the lively Brazilian DKW scene and was able to locate a specimen of this rare car, which it had restored locally. There are said to be twelve “Malzonis” still in existence worldwide. This DKW GT Malzoni, the only one of its kind in Europe, is now one of the highlights at the special exhibition “Ordem & Progresso” – DKW VEMAG and the new dawn in Brazil.

The DKW GT Malzoni is regarded as something of a “Blue Mauritius” by DKW enthusiasts. In the exhibition it is flanked by two other Brazilian DKWs that are owned by Audi Tradition: the DKW Belcar, one of the last DKWs ever to be built, and the in-house model DKW Fissore, along with other historic motor vehicles. As long ago as the 1930s, Auto Union models were on sale in Rio and São Paulo. Auto Union Brasil Ltda. in Rio de Janeiro, which imported Auto Union products, was the first to move into the market in November 1935. Models of the Auto Union brand Wanderer were also very much in demand at the time. A Wanderer W 24 is on display in the museum mobile, along with cars from the twilight years of the DKW in Brazil (1967), when Auto Union was taken over by Volkswagen. The DKW GT Malzoni was succeeded by the DKW Puma GT and then the VW Puma in 1968. Audi Tradition is also showing later VW models made for the Brazilian market, the Volkswagen EA 97 and the Volkswagen SP2.

Brazilian lifestyle, the creativity of the new dawn but also its failures are evoked by three particular productions in the museum mobile. A pavilion with light boxes records the bold plan of the government led by President Juscelino Kubitschek to build the new capital Brasilia at the geographical centre of the country as an example of modern urbanism. Visitors to the exhibition can listen to the samba and bossa nova in two “sound chairs”. “O jogo bonito” – the beautiful game, in other words football, also features large in the exhibition: on one video wall visitors can watch Pelé’s greatest moments during his three World Cup titles, and another one shows footage of the eleven best goals by the Brazilian World Cup team of 1982. That line-up, with all the footballing artistry of Sócrates, Zico and Falcão, is regarded as one of the most creative ever to have taken to the pitch, even though it did not progress beyond the second round.

The present-day company AUDI AG built the Audi A3 at São José dos Pinhais, near Curitiba, from 1999 to 2006. Audi will resume car production there in 2015.