My visit to the opening of the 6th Edition of the Qatar International Food Festival, 2015 (QIFF) at MIA Park – by Elizabeth Walker 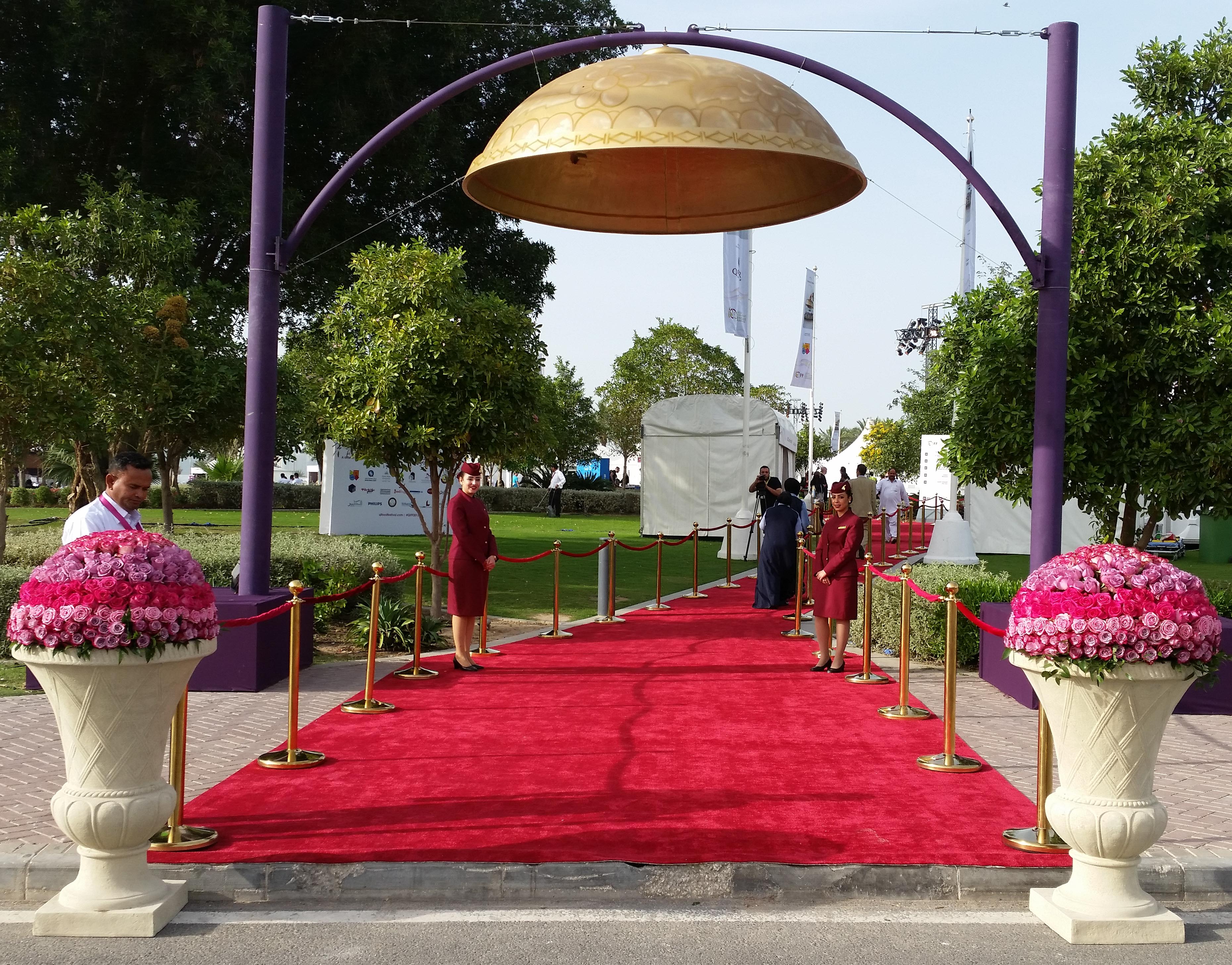 One of my favourite events on the Qatar events calendar is the ever-popular Qatar International Food Festival (QIFF). The event, into it’s sixth year here in Doha is back and takes place from 24-28th March, 2015 at the Museum of Islamic Art (MIA) Park. Entry is free for everyone and timings are 5–10.30pm on March 24th and from the 25-28th March, from 1.30-10.30pm. 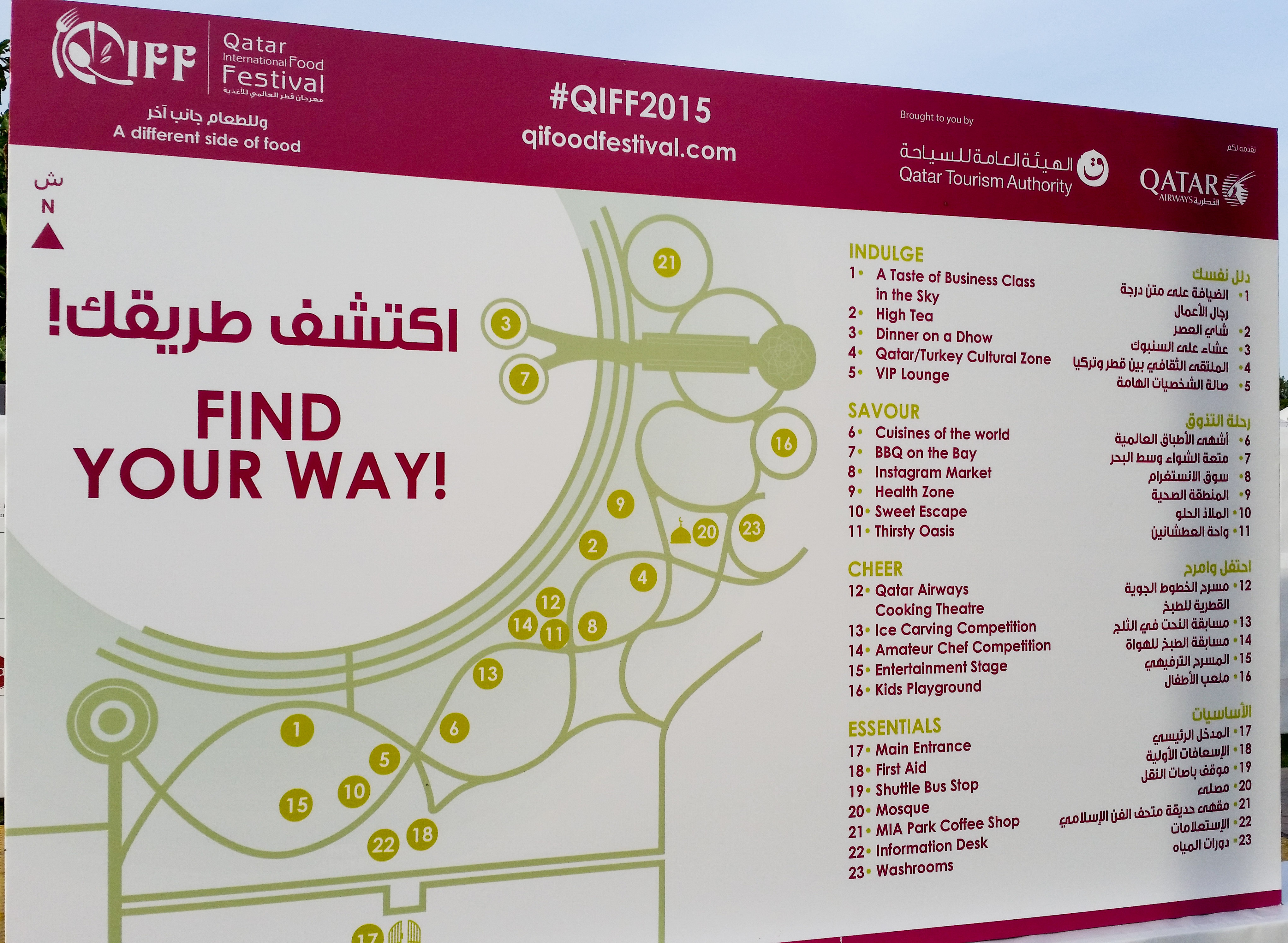 Walking around the vast area of QIFF, 2015, I was pleasantly surprised by the number of food stands that are present this year (reading the Press Release, I see that the percentage of stalls has increased by 15% from last years’ event). I came across cuisines from India to Morocco, Italy to Japan with most tastes catered for and healthy options, such as salads and sandwiches in abundance. Prices range from QR5–QR40, which I think is reasonable for people to get a taste of what each establishment offers, before splashing their cash on a more expensive meal there.

I, myself, started with a classic burger and fries from Elevation Burger, as I was quite hungry by the time I descended on the booths. You can’t beat a good burger and Elevation Burger fills an empty stomach! The cost of my “Elevation Burger, Fries and Cola Combo” was QR35, which I didn’t think was too bad at all. My husband and I ate our burgers on seating close to the Main Stage, where Lebanese Singer, Tarek Sidani was entertaining the crowds with some Coldplay covers.

We then tried some great Braised Short Ribs for QR 30, from The Ritz Carlton Doha which were melt-in-the-mouth tender and were accompanied by a Potato Puree. Highly recommended. These were followed by authentic Mexican delicacies from Mr Taco; a restaurant that is one of my favourites here in Doha! The dishes here are so unbelievably Mexican in flavor that you would swear that you were buying them in the country itself; testament to the owner, Gilberto and his wife who are Mexican themselves. I have lived in Mexico for many years in the past, so it is great for me to have discovered this place and relive those culinary memories. From Mr Taco I tried a Tamal en Salsa Verde (tamal in green sauce), which was great and ever-so-slightly spicy (as I’m not a fan of heavily spiced food); this was QR 10. I then tried Guacamole and Chips (QR 23), followed by a Taco de Barbacoa (QR 15), both of which were great! 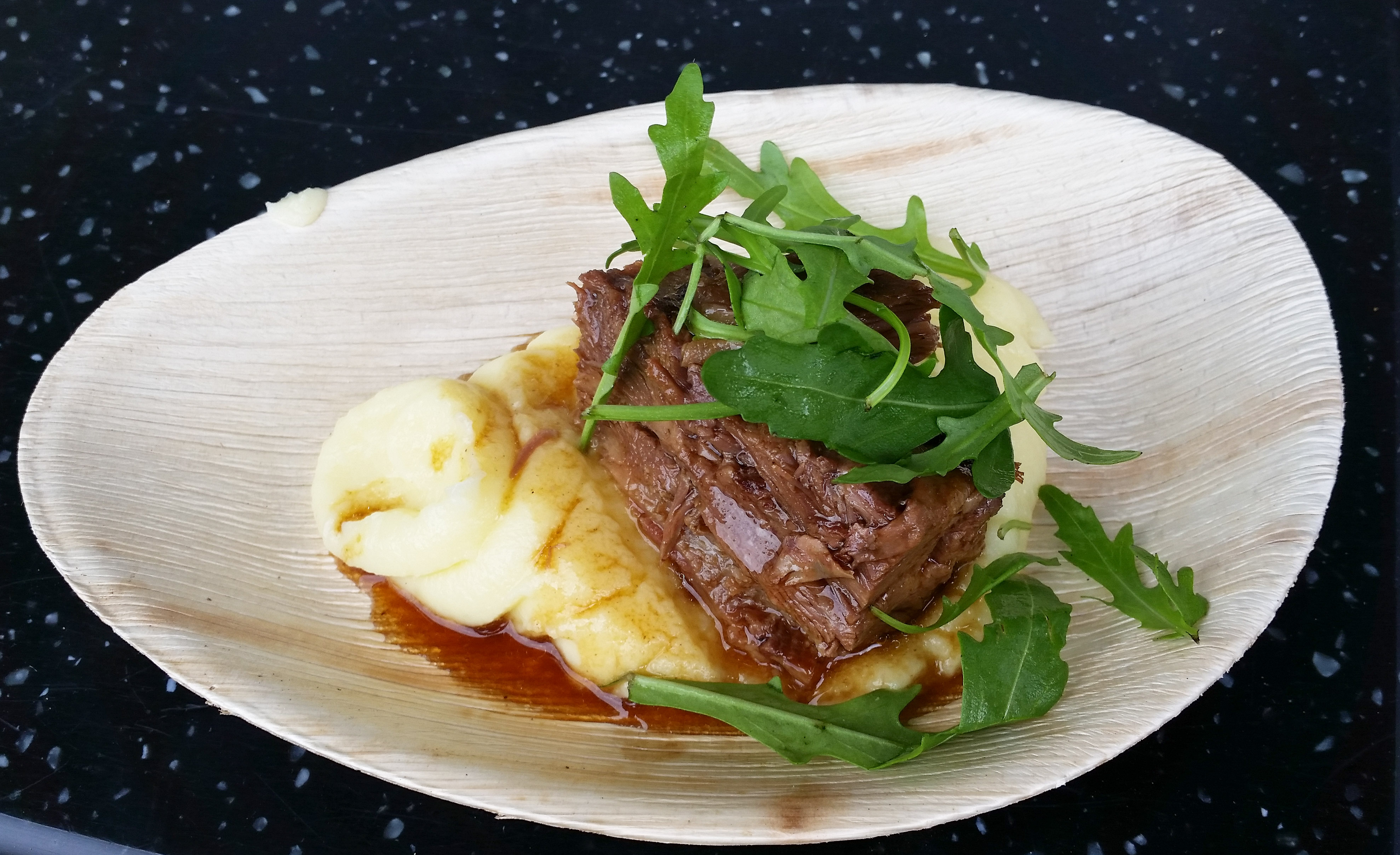 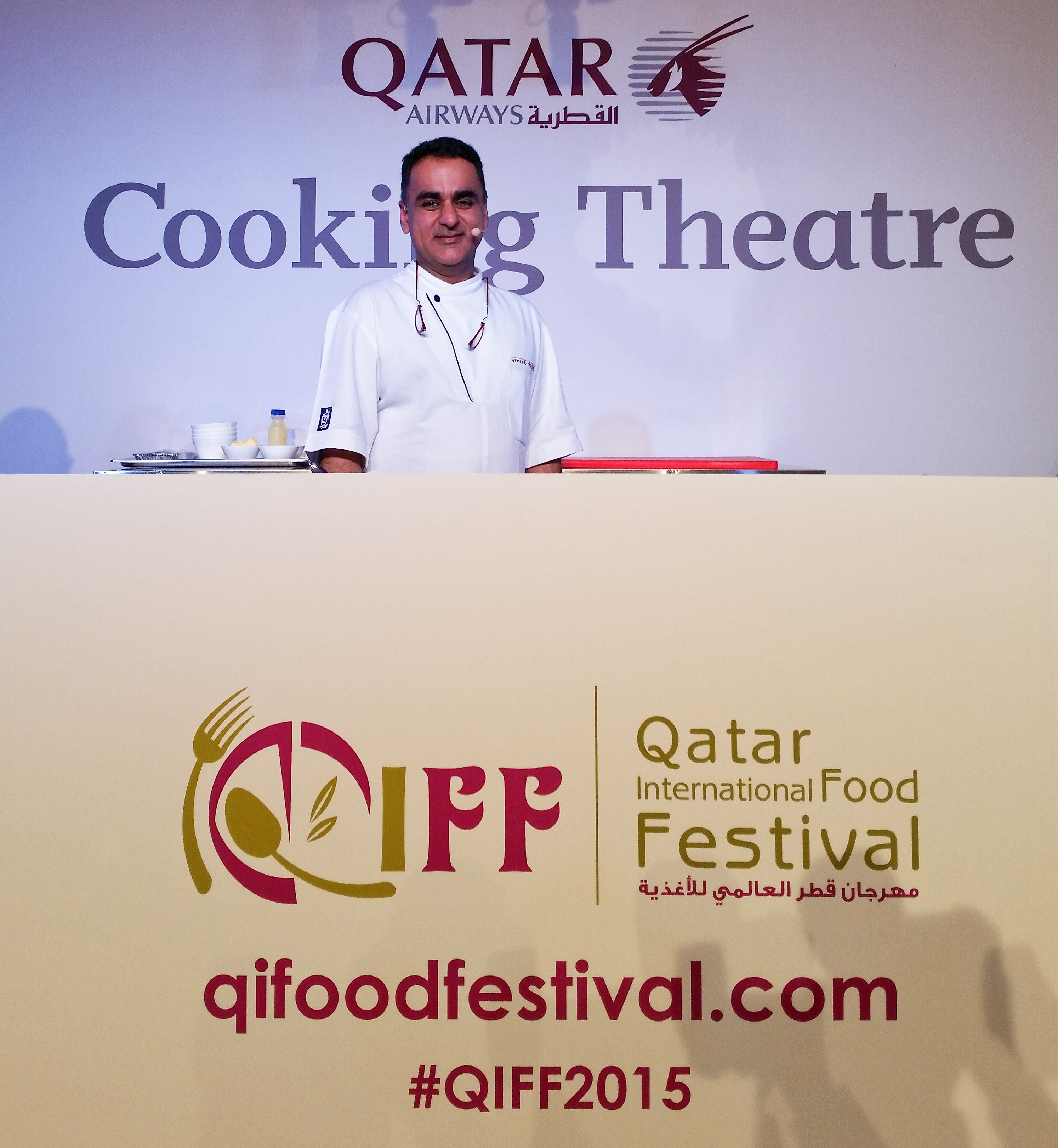 Next on the menu was Butter Chicken from Royal Tandoor (QR 15), as I am a big fan of Indian cuisine. This dish did not disappoint and had just a hint of spiciness in the classic sweet tasting butter sauce. I had eaten at Royal Tandoor in Doha in the past, a long time ago and I’m happy to say that the high standards of their cuisine have remained the same. Again, I would highly recommend this stand at QIFF. My husband and I were then tempted by the Beef Medallion, Espuma Creamy Potato, Baby Vegetables and Shallot Jus (QR 30) from Sharq Village & Spa, which again was excellent. The Beef was very tender, having, I imagine been cooked for many hours at a low temperature and the mash was very creamy and light, with slightly-crunchy vegetables on the side. Again, I cannot fault the dish in any way.

Our final dish took us back to our home cuisine of the U.K., as we sampled good old fashioned Fish and Chips (QR 25) from the “Champions” part of the Marriott Marquis City Center Doha Hotel stand. The fish was great with crispy batter, just like back home and the chips were tasty, although they were not the usual thick-sliced ones that usually accompany fish and chips back in Blighty. Saying that, I can’t complain about the dish and really enjoyed it.

For something sweet, we treated ourselves to an Oreo Milkshake from Elevation Burger (QR 21), which was heavenly! Top brand ice-cream, mixed with full fat milk (I imagine) and Oreo cookies too; what is there not to like? Our stomachs were so full after all those dishes, that we could not eat a scrap more.

Checking out the free Entertainment Schedule, which was handed to me by friendly staff near the main entrance to QIFF, I saw that there are many shows and performances to entertain attendees. On the list for QIFF 2015 are: NiliyNils Unicycle Show & NilyNils Glow Show, a Multicultural Dance show, Ankara State Classical Turkish Music Choir, Arda Folk Dance, Break Dancers, Pizza Freestyle Show, Tarek Sidani as mentioned and Drumming Performances. Something for everyone and catering to all tastes.

I was lucky to see the NilyNils Unicycle Show, which I would recommend for kids mostly, but which, as an adult, I found entertaining all the same. The finale is quite impressive, as he juggles swords and eats an apple while riding a very tall unicycle around the stage. 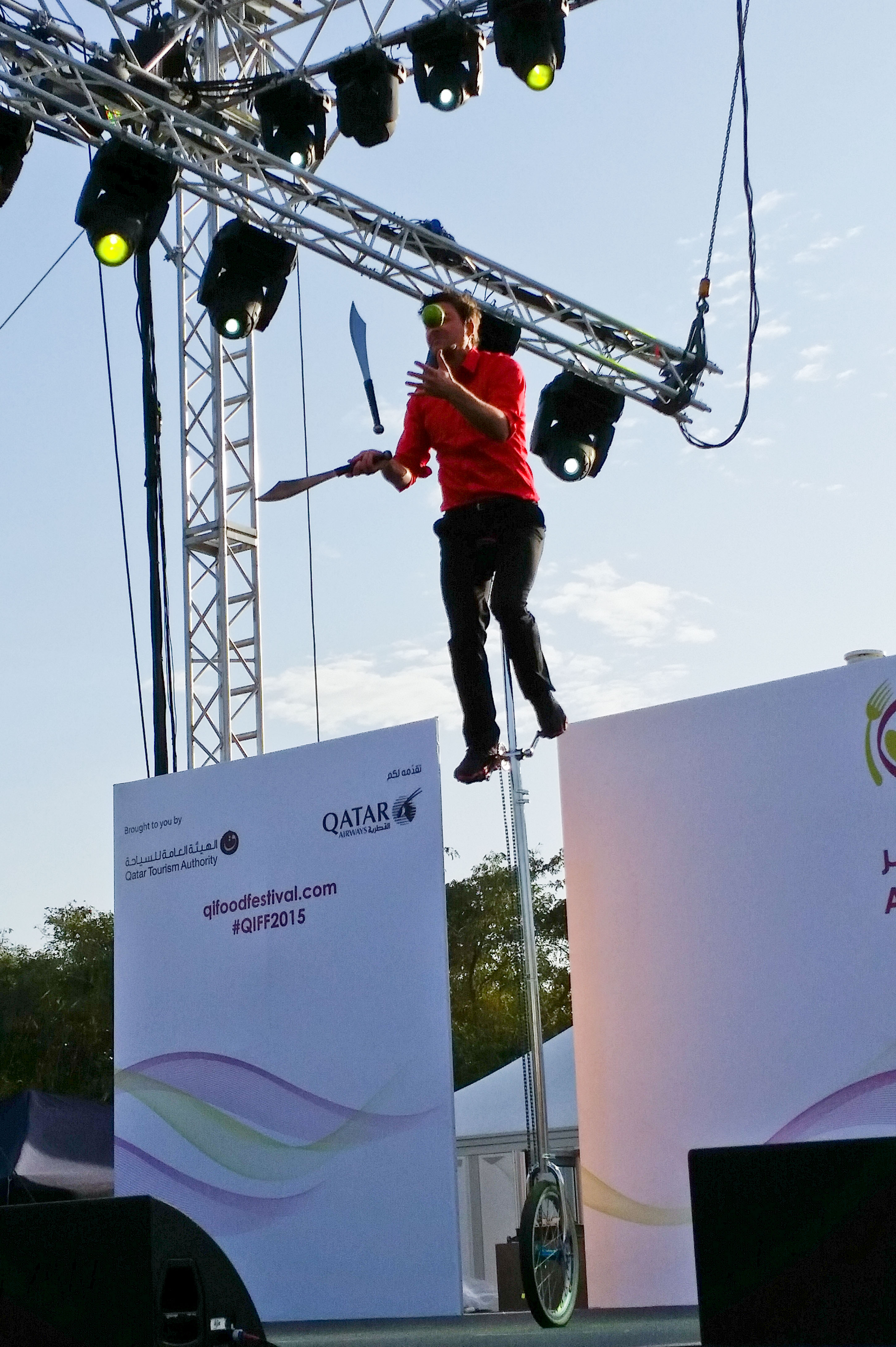 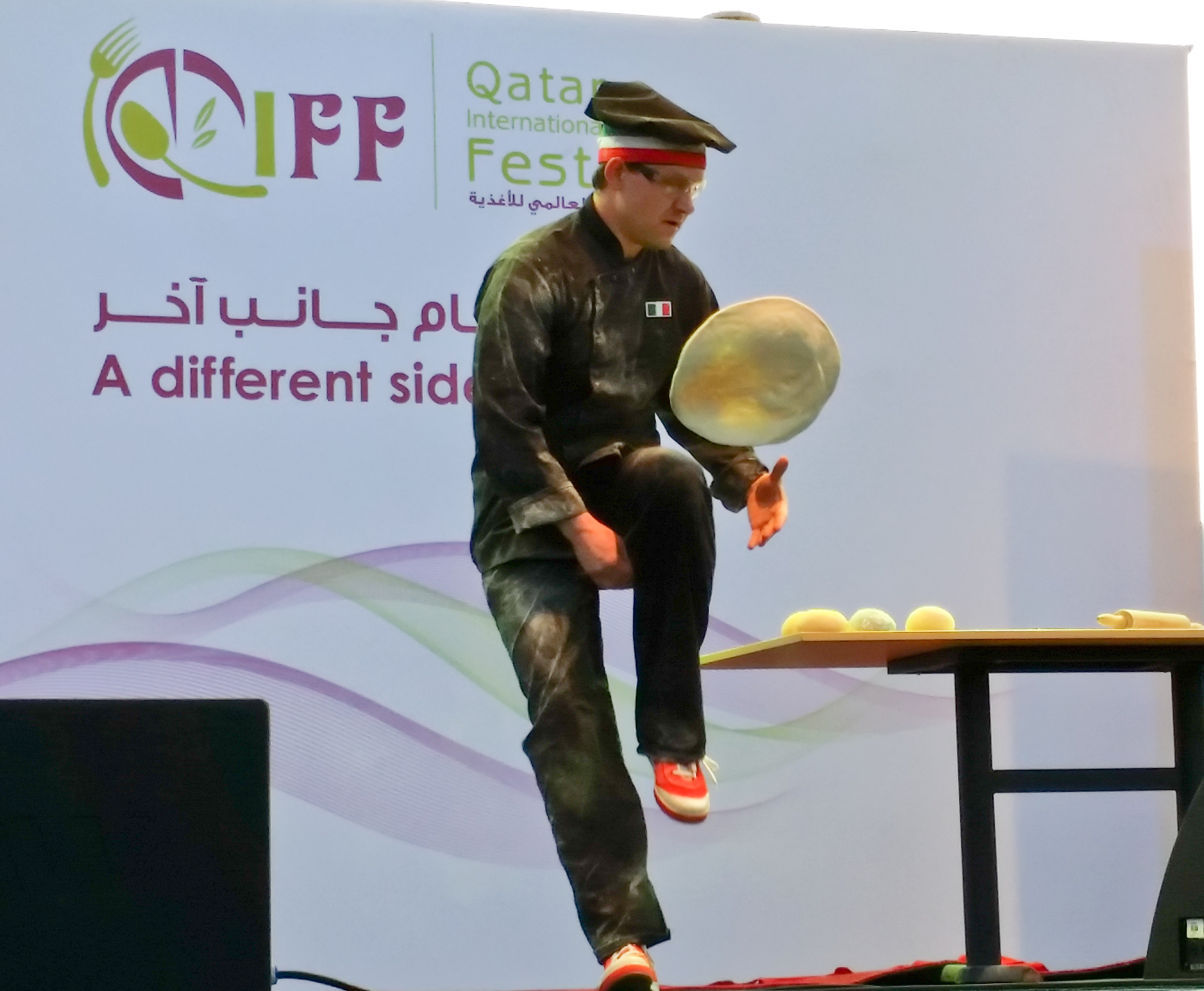 I also saw the Break Dancers in action, who have some great moves and my favourite show, which was the Pizza Freestyle Show! Two guys juggle and spin pizza dough for the crowd, sometimes even with their feet and I found this great entertainment. I also caught the NilyNils Glow Show, where he juggles ever-changing coloured clubs for the audiences’ delight. There is also a colourful matching band that circles the park at regular intervals and I found this nice too.

There are also cooking demonstrations happening from 5pm onwards at the Qatar Airways Cooking Theatre. We were lucky to see Chef Vineet Bhatia in action and afterwards we had the chance to meet him and take some photos with him, which for a “foodie” is pretty cool. I also caught a cooking demonstration with Chef Mattias Roock, from the Kempinski Marsa Malaz Hotel and was lucky to taste his finished dish of “Mediterranean Fish with Pasta”, which was very tasty indeed.

The Events schedule for QIFF 2015 can be found here: http://www.qifoodfestival.com/en/entertainment-schedule/

Walking around the venue, one cannot help but notice a giant crane dominating MIA Park. At first glance you may think that this is a bungee jumping attraction, but upon closer inspection you realize that it’s “A Taste of Business Class in the Sky”. Guests can pre-book a seat at a cost of QR 500 per person and have the pleasure of tasting Qatar Airways’ fine Business Class cuisine, while suspended 60m above the QIFF crowds in a “floating restaurant”; not one for the faint -hearted. An ILQ colleague got to experience this last night at their 8pm “sitting” and reported that the cuisine was first class and he got some great aerial shots to boot. 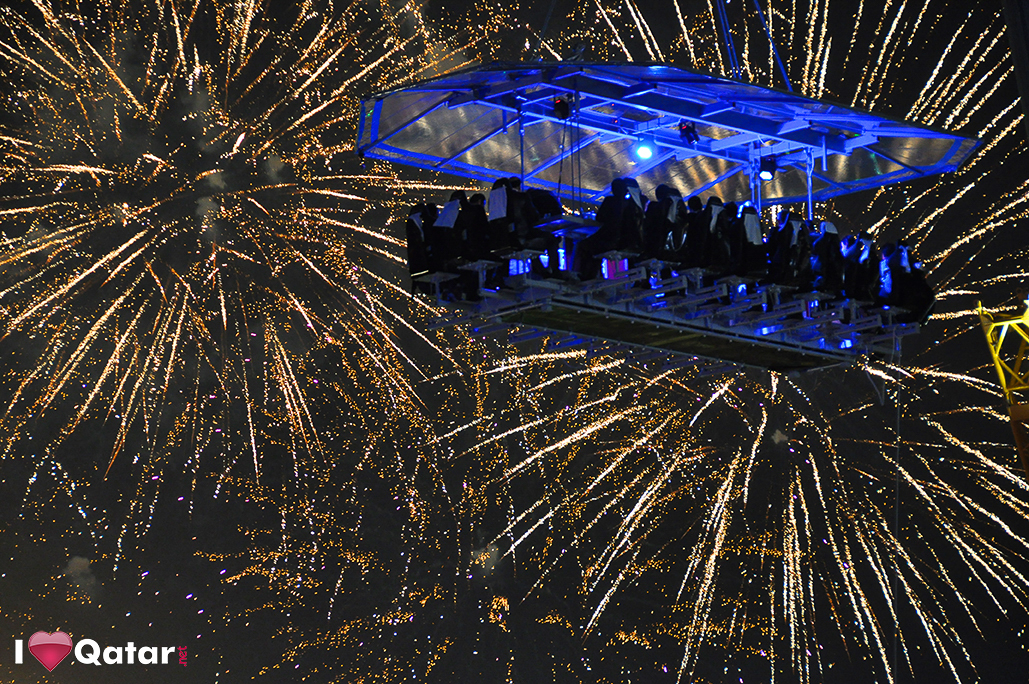 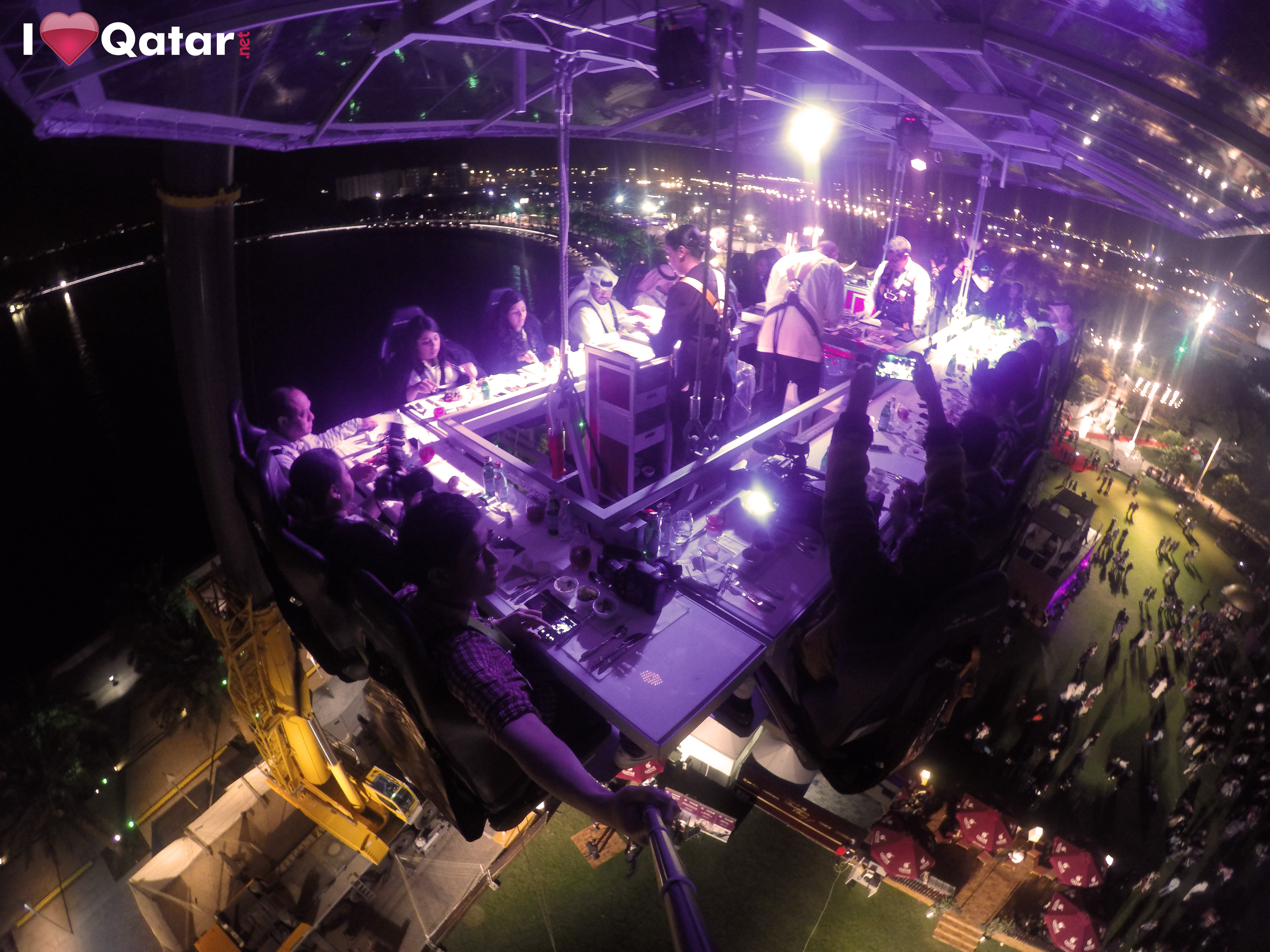 Other attractions at QIFF 2015 include High Tea catered by Kempinski Marsa Malaz, Dinner on a Dhow and Afternoon Tea Cruise, the Qatar/Turkey Cultural Zone, BBQ on the Bay, Instagram Market, an Ice Craving Competition and Philips Amateur Chef Competition. Details and costings of these can be found at: http://www.qifoodfestival.com/en/indulge/

Also, must mention that parking is very limited at the MIA carpark, so check out the following link for parking locations, where shuttle buses will transport guests back and forth to the venue at regular intervals.

In summary, I would highly recommend a visit to QIFF 2015, as you will sample great food from all around the world at affordable prices and enjoy the varied program of entertainment on offer. If you want to splurge, there is the option to explore to optional activities such as “A Taste of Business Class in the Sky”.