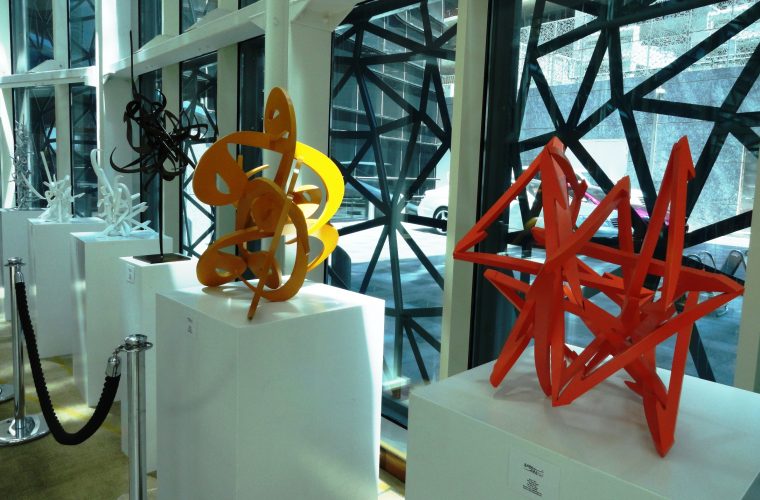 InterContinental Doha The City is proud to host a new art exhibition by acclaimed artist Sabah Arbilli. Specifically created for Ramadan and Eid, Arbilli uses his extraordinary gift for calligraphy art to create this collection of works centred around Alif – the first letter of Arabic alphabet and the first letter in the revelation of the Quran.

The Alif exhibition consisting of paintings, sculptures and installations was officially unveiled at a VIP opening on Thursday evening (17th July). The exhibit will remain on display in the lobby area of InterContinental Doha The City from 17 July to 17 September 2014.

“As part of our ongoing commitment to support local artists, we are delighted to host Sabah Aribilli’s Alif exhibition at our hotel,” said Cedric Gaillard, Hotel Manager, InterContinental Doha The City. “It is through Sabah’s pieces that we can find inspiration and further reflect on the meaning of Ramadan and the celebration of Eid.”

“Alif” is the first letter from the revealed word Iqra which means read. Muslims around the world believe that this was the first word revealed by god. Thus, the first letter in the Arabic alphabet is Alif and the inspiration behind this collection of works.

In addition, Arbilli uses the power of the brush strokes reflecting the real experience of past and present of his homeland in Iraq.

He states, “I envisage the lands which relate to the echo in my ear taking me back to a place where I see harmony and tranquility. I see the forms of the letter all around me waiting to unravel a meaning of hidden truth beneath the façade. I smell the place and sense my presence and belonging which I capture to share with the audience.”

Sabah Arbilli is an award-winning British artist of Iraqi origin and is known for the art of calligraphy and sculpture. Arbilli has made a substantial impact in the art of Arabic Calligraphy, bringing it to the forefront of the international scene over the last 15 years. As a pioneer of the genre, Arbilli has become a key figure in calligraphy art and has brought it to a new contemporary style.

Located throughout the lobby area, the general public may view the exhibition artworks through 17 September 2014.