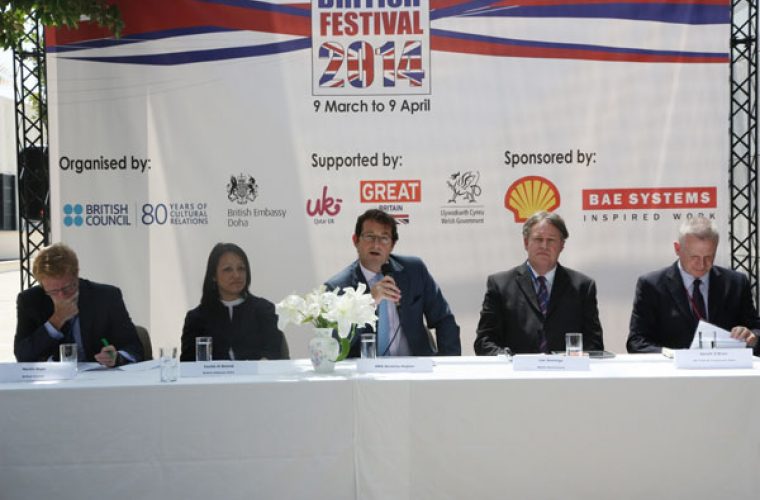 The British Festival 2014 yesterday opened as the first of flagship initiatives to build a legacy programme of the popular Qatar UK 2013 Year of Culture.

Ambassador Nicholas Hopton launched the festival which focuses on education, commerce and culture.

Building on the success of the Qatar UK 2013 Year of Culture, which included artistic exchange and business engagement, the festival reinforces the strong bond between both countries.

Hopton said, “We are delighted and proud to launch the festival. Following the tremendous success of Qatar UK 2013 Year of Culture, the festival is a continuing celebration of strong ties and ongoing cultural exchange between Qatar and the UK. The festival provides a platform for nurturing existing partnerships and forging new ones — in art, education, commerce and science. We want to highlight how British cutting-edge design, quality, innovation and style can be found in the sphere of culture and on the high street. We look forward to continuing our work with our partners as the festival starts and hope many British residents here will get involved.”

As part of the festival, those interested in studying in the UK will have the opportunity to explore a wide range of courses and meet representatives of 22 British universities at ‘Study in the UK Exhibition’. Renowned sarod player and composer Soumik Datta, a resident artist for the London- based Alchemy Festival and the Rich Mix cultural foundation, will perform at ‘Circle of Sound’ at Al Rayyan Theatre on March 30. The Urban Playground, the UK’s leading performance parkour group, will showcase skills at Souq Waqif until Wednesday, along with school workshops between April 7 and April 10.

Gareth O’Brien, Director, Trade and Investment at the British embassy, said “We are delighted to support British companies and iconic British brands in Qatar. The festival provides an excellent platform to celebrate the strength of Qatar-UK commercial partnerships and forge new ones. Trade between our two countries is very healthy. It was worth more than QR30bn in 2013 and is going from strength to strength. However, we are keen to see more British companies active here to support Qatar’s plans to deliver the FIFA World Cup in 2022 and National Vision 2030 and beyond.” The embassy encourages British schools and organisations and Britons in Qatar to hold their events to celebrate the festival, using this month as an opportunity to highlight the best of British. Updates on the festival could be followed on British Council Qatar and the embassy’s social media channels and the hashtag #BritFestQA.