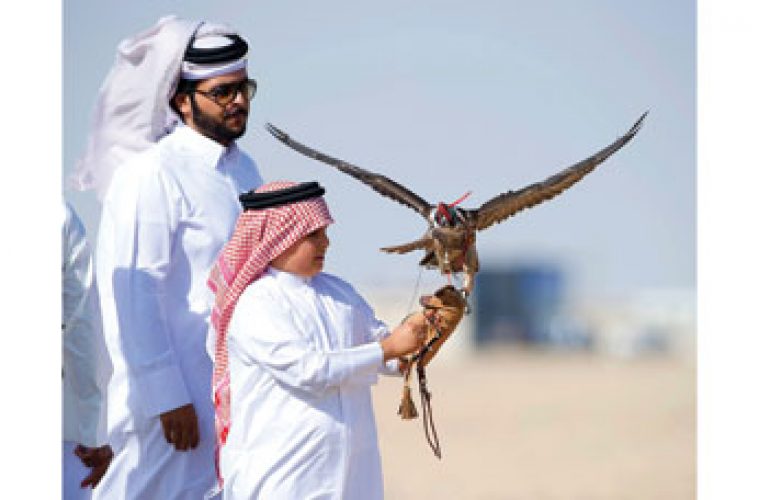 A young Shaheen falcon sold for a staggering price of QR100,000 at a recent auction held at Souq Waqif. A total of 150 of the best falcons were sold at the two-day auction held at Souq Waqif’s bird market. Prices of the costly birds ranged from QR25,000 to QR70,000 but competition among buyers pushed the prices as high as QR100,000. A Qatari citizen bought the most expensive falcon at the auction organised under the patronage of Souq Waqif Boutique Hotels and Falcon Hospital. Saree Hamad Al Hajri, Director of the Souq Waqif bird market and one of the organisers of the event, said the auction was aimed at making people interested in falcons in Qatar and neighbouring countries to come together and see over 150 falcons in one place at one time and to buy the type of falcon they want. Meanwhile, a Syrian sheep was sold for QR26,000 at this weekend’s auction at an animal farm in Al Kheraib. Held monthly, the idea of the auction came after the successful Halal festival organised in Katara. The auction started from sunset and continued till 11.30pm. Last year the auction sold one Syrian sheep for QR72,000. Khamees Al Kuwari, one of the organisers, said instead of organising animal auction every year, it would be beneficial to have it monthly to prevent traders from manipulating buyers here. “This auction is not for profit but aimed mainly at preventing trader from manipulating the Qatari consumers,” he said. Organisers believed having auctions often would encourage lower prices as it would promote competition among traders. Some foreigners, they say, buy these animals from other countries for cheap prices and sell them here for very expensive prices. Fifty animals were sold at the auction held at the farm of Ahmad Nasser Al Kuwari in Al Kheraib. The 12th such event was organised to auction animals both for production and beauty. The first one was launched in October last year. The auction is being supported by the Ministry of Environment which would soon provide a piece of land in Al Kheraib to serve as venue for the regular auctions.