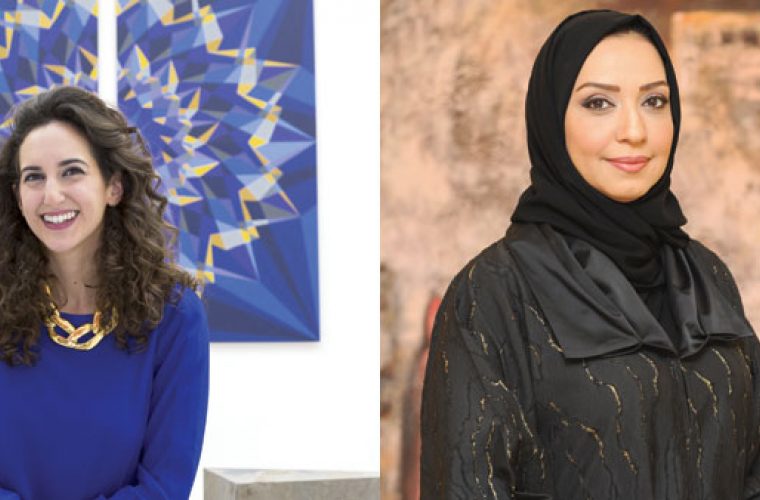 Continuing the legacy of Qatar UK 2013 Year of Culture and Fashion Exchange, top Qatari artists Amal al-Aathem and Noor Abuissa have joined forces with Belfast-based UK label, Art On Fashion, to create a Ready to Wear women’s collection and luxury scarves.
The collaboration, which will use the artists’ creations as digital prints, is to be launched this summer in Qatar through leading high-end retailers. Plans are under way to create exclusive designs for each of the retailers to provide greater options and convenience for customers who want to own “unique wearable art”.
The collection is being designed by a team in the UK led by Celine Magill, creative director and founder of Art on Fashion. The Ready to Wear collection will feature the art of Amal while the scarves are exclusively designed by Noor.
Describing the women in Qatar as sophisticated buyers accustomed to the best quality products and brands, Magill said the clothes will be produced in Europe with the scarves printed and manufactured in Italy.
“We have received a fantastic response from popular retailers who are eagerly waiting for the collections and will select their preferred designs,” Magill stated.
Amal, one of the most prominent Qatari artists, has won critical acclaim internationally through exhibitions of her work in the region and different parts of the world, including her recent exhibition at the Istanbul Art Fair.
The collection will feature her art from Moon Dialogue, Woman’s Journey and Faces, among others, where the central focus is on spirituality and women. “As a Qatari artist, it is inspiring to creatively merge the east and the west and what a more beautiful way than to create beautiful and stylish clothes for all women,” Amal said.
“This art collaboration transcends boundaries and sends a powerful message that we can unite through our shared passions… in this case, art and fashion.”
Noor, considered the rising star on the Qatari art scene, recently exhibited at the Al Riwaq Gallery as part of Qatar Brazil 2014 Year of Culture. She graduated from Central Saint Martin’s College of Art and Design with a BA in Fine Art.
She has created her artistic language by adapting Islamic geometric design into contemporary art. Noor subsequently applies it in painting, sculpture and furniture design to respectively highlight its most unique values: power of colour, simplicity in form and undeniable beauty.
“Islamic geometric design, when fused with contemporary colour schemes, becomes relatable to an international audience. The collaboration with Art On Fashion allows such a large audience to own and wear a piece of our culture,” Noor said.
Fashion Exchange was the platform for dialogue and collaboration between Qatari and UK fashion designers during the Year of Culture in 2013 featuring emerging Qatari designers Wadha al-Hajri, Fathea al-Jaber, Elham al-Ansari and Hessa al-Mannai alongside Philip Treacy, Asprey, Nicholas Kirkwood, Emilia Wickstead, Stephen Jones, the late L’Wren Scott and royal jewellers Robinson Pelham.
Safiya al-Hajjari, head of Strategic Cultural Projects at Qatar Museums, described the Years of Culture as a fantastic way to encourage greater cultural understanding and facilitate creative collaborations between Qatar and the participating countries.
“We are very pleased to see these collaborations developing into successful commercial endeavours,” she added.
Martin Hope, director of the British Council in Qatar, said: “These partnerships are a great example that we can achieve successful results and better cultural understanding through a common platform.
“Fashion Exchange was one of the popular elements during Qatar UK 2013 Year of Culture both in London and Doha. British Council is proud to have supported these partnerships and see them come to fruition as commercial alliances.”