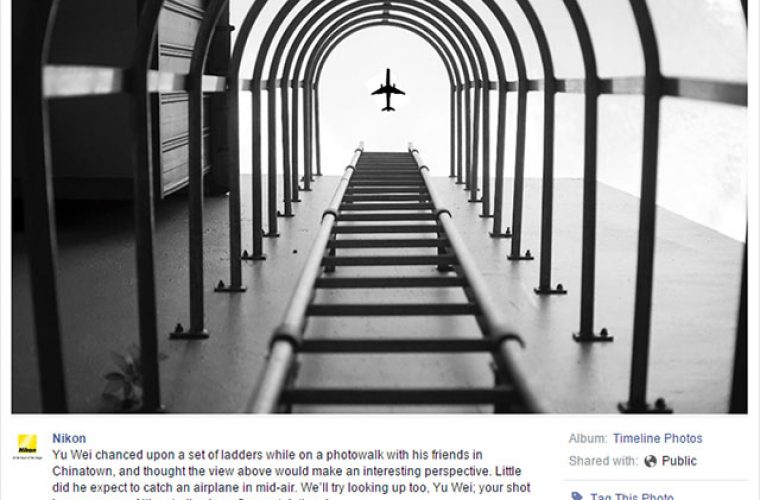 Nikon Singapore posted an announcement on its Facebook page yesterday, congratulating a photographer named Chay Yu Wei for capturing a perfect shot of an airplane framed by a ladder in Chinatown.

Photographers quickly pointed out that the photo is clearly the result of editing, and sarcastic comments soon flooded the post.

“Yu Wei chanced upon a set of ladders while on a photowalk with his friends in Chinatown, and thought the view above would make an interesting perspective,” Nikon wrote. “Little did he expect to catch an airplane in mid-air. We’ll try looking up too, Yu Wei.”

Upon closer inspection, however, a white box can be seen around the airplane. One commenter points out that a simple levels adjustment reveals this box quite clearly: 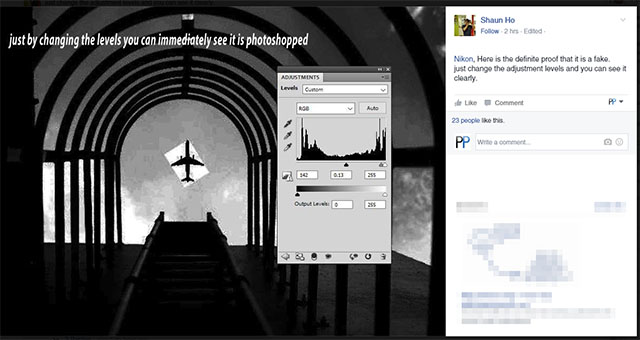 Photographers were merciless in their witty responses. Here’s a sampling of other highest voted comments that were left on the post: 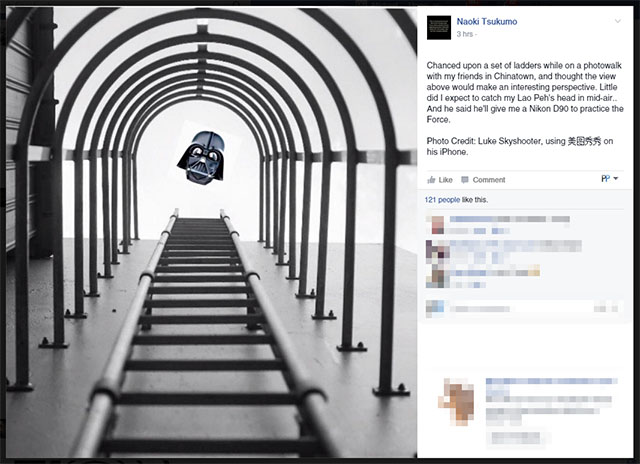 The photographer responded to one fan on Instagram, saying that he didn’t have to wait too long for the plane because he got “lucky”: 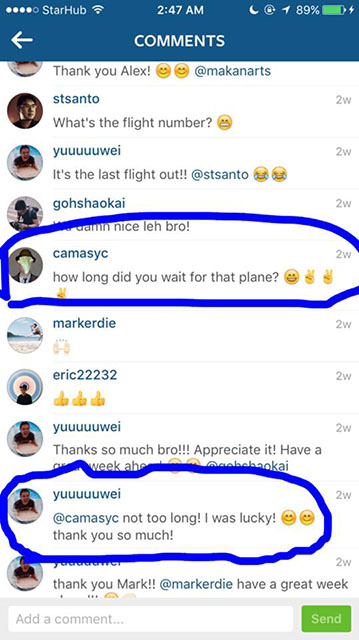 At the time of this post, the post and prize-winning photo are still up on Nikon Singapore’s page, and there has been no official response from the camera company.

Here’s a statement/explanation given to PetaPixel by Chay Yu Wei:

"I am the one who submitted the Chinatown plane post, and I would like to address it.

I’ve been quiet so far because I’ve been trying to contact Nikon and have been waiting for them to contact me back to discuss about this. I understand that what I would say might affect Nikon’s brand hence I decided to wait for their advice. However, since more than 24 hours have passed and I have not managed to have discussions with Nikon, I think I shouldn’t wait and it’s important for me to come out to address this issue.

Like one user commented, I was on a photo walk in Chinatown and I chanced upon that set of ladders. I snapped a picture of it, and subsequently felt that a plane at that spot would make for an interesting point of view. Hence, I inserted the plane with PicsArt and uploaded it to Instagram. That’s how I use Instagram, sometime it’s to showcase the work I’m proud of, sometimes just to have fun. This case, that small plane was just for fun and it was not meant to bluff anyone. I would have done it with photoshop if I really meant to lie about it, but no, it was a playful edit using the PicsArt app and uploaded to Instagram. When my friends commented with some questions, I also answered it jokingly, saying it’s the last flight of the day and saying it was my lucky day that I did not wait too long. At that time, of course everyone who read it took it as a joke, before this issue arrived and it is taken seriously.

However, I made a mistake by not keeping it to Instagram as a casual social media platform. I crossed the line by submitting the photo for a competition. I meant it as a joke and I’m really sorry to Nikon for disrespecting the competition. It is a mistake and I shouldn’t have done that. I also shouldn’t have jokingly answered Nikon that I caught the plane in mid-air and should have just clarified that the plane was edited in using PicsArt. This is my fault and I sincerely apologise to Nikon, to all Nikon Photographers, and to the photography community as general.

This has been a great lesson to me, and I hope I will be a wiser person to use this as encouragement to polish my photography skill. Thank you for taking the time to read this, and I also appreciate all the supports from friends around me."