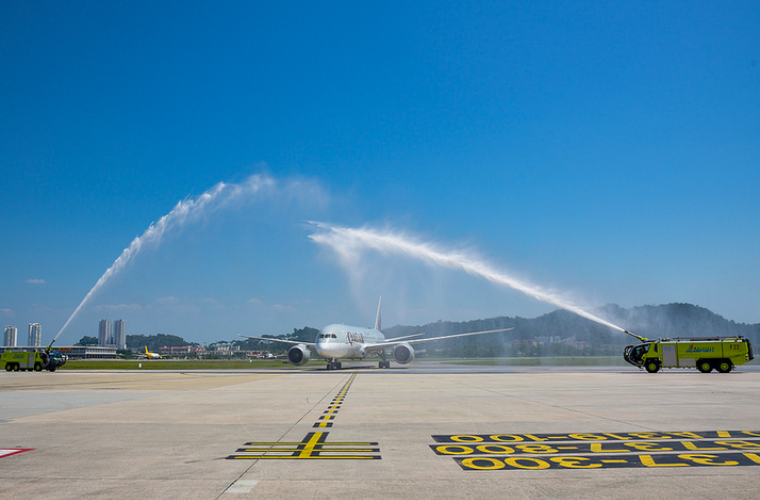 The delegation was led by Qatar Airways Chief Commercial Officer, Mr. Ehab Amin, and was accompanied by His Excellency Mr. Ahmad Fadil Shamsuddin, the Malaysian Ambassador to the State of Qatar.

Qatar Airways Group Chief Executive, His Excellency Mr. Akbar Al Baker, said: “We are delighted to launch direct flights to Penang, a long-anticipated addition to our global route network. Our Kuala Lumpur service started in 2001, and it has since grown to a triple-daily direct non-stop service to and from Doha. We are tremendously pleased to now be able to offer our passengers another exciting destination to experience in this beautiful country.

“The addition of Penang to our global network comes as part of our continued expansion plans throughout Eastern Asia, as we have recently launched direct services to Thailand’s Chiang Mai and Pattaya, as well as adding additional services to Krabi, Ho Chi Minh City and Hanoi.”

His Excellency Mr. Lim Guan Eng, Chief Minister of Penang, said: “We offer a UNESCO World Heritage city that is captivating in not only our cultural diversity and religious harmony but also in offering our natural beauty and world class tourism products. Let your senses be invaded by sights, sounds and smells that will entice you to come back for more.”

Managing Director of Malaysia Airports, Datuk Badlisham Ghazali, said: “With the current triple-daily frequencies to Kuala Lumpur catering to the many passengers travelling to destinations in North America and Europe, we believe that the same demand for these destinations from Penang is growing rapidly. As one of the busiest airports in Malaysia, Penang International Airport recorded seven million passenger movements last year.

“It is without doubt that the airport is the hub for northern Malaysia, bearing potential for increased connectivity. Having worked together for the past 17 years, we take pleasure in welcoming Qatar Airways, which will be another great addition to the existing international airlines at Penang International Airport. With this new route, Qatar Airways will be the first Middle Eastern carrier to offer non-stop flight service from Doha to Penang, a city well known for being a UNESCO World Heritage City. The long haul flight to Penang will also bring a great expansion in tourism opportunities in Malaysia. We definitely look forward to creating many more memorable moments with Qatar Airways.”

Until then, Qatar Airways will fly three times a week to Penang with its state-of-the-art Boeing 787 Dreamliner, which features 22 seats in Business Class and 232 seats in Economy Class, with spacious cabins and specially-designed interiors.

From ornate temples to tropical gardens, the sights and sounds of Penang reflect the city’s rich cultural heritage. Holidaymakers and business travellers alike will be enchanted by the country’s magnificent scenery. Penang, known as the gourmet capital of Malaysia, offers a host of culinary delights to please the palate. Penang is also the most frequented destination for retirees in Malaysia.

The award-winning airline first launched service to Malaysia in December 2001, and currently operates a triple-daily service to Kuala Lumpur, the Malaysian capital.

Qatar Airways seamlessly connects passengers from Malaysia to more than 150 destinations across six continents via its award-winning Hamad International Airport. As part of its continued expansion plans, the airline also recently launched services to Chiang Mai, Thailand and St. Petersburg, Russia, and plans a host of exciting route launches for 2018, including Thessaloniki, Greece; Canberra, Australia and Cardiff, United Kingdom, to name just a few.

The national carrier of the State of Qatar is one of the world’s fastest-growing airlines operating a modern fleet of more than 200 aircraft flying to business and leisure destinations across six continents.

The award-winning airline has received a number of accolades recently, including ‘Airline of the Year’ by the prestigious 2017 Skytrax World Airline Awards, held at the Paris Air Show. This is the fourth time that Qatar Airways has been given this global recognition. In addition to being voted ‘World’s Best Airline’ by travellers from around the world, Qatar’s national carrier also won a raft of other major awards at the ceremony, including ‘Best Middle East Airline,’ ‘World’s Best Business Class’ and ‘World’s Best First Class Airline Lounge.’

All mages courtesy of Qatar Airways