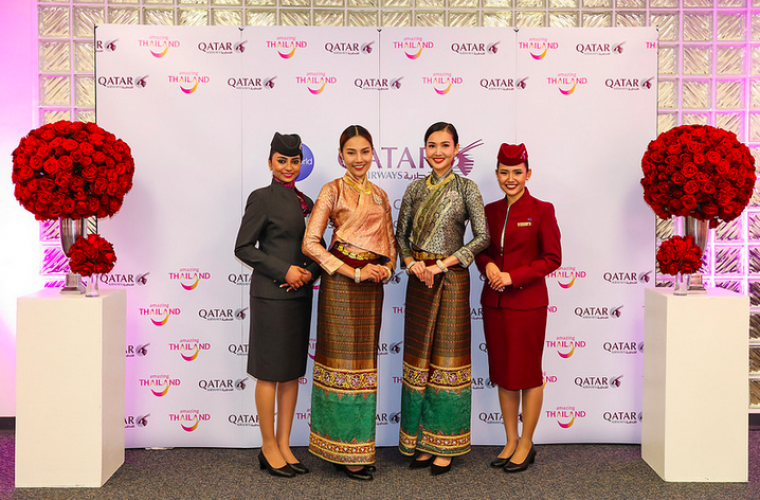 Qatar Airways celebrated the start of its new direct non-stop service from Doha to Chiang Mai today at Chiang Mai International Airport, after its first flight was greeted with a traditional water cannon salute. The newly-launched seasonal service to Thailand’s second biggest city will operate a four times-weekly schedule from Doha, with a flight time of just over six hours.

His Excellency Mr. Jassim bin Saif Ahmed Al Sulaiti, the Qatari Minister of Transport and Communications, said: “Today’s inaugural flight to historic Chiang Mai marks further growth in the already strong bonds between the State of Qatar and the Kingdom of Thailand. I am very proud that our national flag carrier, Qatar Airways, now flies to four beautiful destinations in Thailand and will soon add its fifth with Pattaya joining their global network in January. The increase in business, tourism and trade between our two nations that these flights support cannot be underestimated and it gives me great pleasure to celebrate with the people of Chiang Mai on this occasion.”

H.E. Mr. Akbar Al Baker said: “We are excited to be adding historic Chiang Mai as our fourth destination in Thailand to our extensive global route network. Thailand continues to grow in popularity with holiday-makers seeking to explore and relax in this beautiful country. The new route we have launched today reflects the increasing demand from our customers across our network for more high-quality leisure destinations, especially in the Far East.

“With the choice of four flights a week, passengers travelling from Chiang Mai are now connected seamlessly to more than 150 destinations, via our state-of-the-art hub in Doha. Next year we will add a fifth Thai destination to our network when we expand our services to include Pattaya, starting January 28, 2018.”

The Thai Ambassador to the State of Qatar, H.E. Mr. Soonthorn Chaiyindeepum said: “Qatar Airways' new direct service to wonderful Chiang Mai strengthens the deep and strong bonds of friendship that exist between the people of Qatar and Thailand. This new route will further enhance that relationship, connecting Chiang Mai to Qatar Airways’ extensive global network and helping to open up and develop new markets for business and leisure travellers from around the world.

“We look forward to welcoming business travellers and holiday-makers to beautiful Chiang Mai so they can experience authentic Thai hospitality and enjoy the history and beautiful and tranquil surroundings of Thailand’s second largest city. I would personally like to thank and congratulate Qatar Airways Group Chief Executive H.E. Mr. Akbar Al Baker for opening what I am certain will be a very popular and successful new seasonal service, and for bringing the world's best airline to Chiang Mai.”

Governor of the Tourism Authority of Thailand, Mr. Yuthasak Supasorn, said: “The commencement of Qatar Airways’ new services to Chiang Mai heralds the start of a new era of connectivity between Chiang Mai and Qatar, and the 150 destinations it serves through its global route network. I would like to thank Qatar Airways for launching this new four-times-a-week service, which will offer exciting new routes from our key markets in Europe, the United States and throughout the Middle East into Chiang Mai via Doha.

“This new route is proof that working with the right airlines on strategic campaigns to promote our country is crucial to attracting tourists to Thailand. We believe that together with Qatar Airways we can also grow demand from tourists looking to experience Chiang Mai’s unique and authentic culture, as well as increase prosperity for the region. Next year we look forward to deepening our ties with Qatar Airways when the airline adds a fifth Thai gateway to its route network with the start of flights from Doha to U-Tapao near Pattaya.”

General Manager of Chiang Mai International Airport, Squadron Leader Monthanik Rakngam, added: “We are delighted to welcome the world’s best airline, Qatar Airways, to Chiang Mai International Airport and look forward to working in partnership with the airline in the years to come. This new four times-weekly service provides a very important link for Chiang Mai to Qatar Airways network of flights to more than 150 global destinations.

“It also enhances Chiang Mai International Airport as a major gateway to Northern Thailand, which already welcomes over two million visitors a year from around the world to beautiful Chiang Mai. With our extensive range of services and facilities for visitors and major airlines, we believe Qatar Airways will play an important part to make Chiang Mai an increasingly popular tourist destination.”

Qatar Airways will operate the new four-times-a -week service to Chiang Mai with an Airbus A330-200 aircraft, which features 24 seats in Business Class and 236 seats in Economy Class. Passengers will be able to enjoy the airline’s superior entertainment system, offering up to 4,000 entertainment options. The seasonal service will operate from 12 December until May 2018, and will resume once again for the Winter 2018 season in October 2018.

As Thailand's second largest city, Chiang Mai is well known for its relaxed lifestyle and laid back attitude. It has a long and revered history going back to the medieval period, during which many of the city’s hundreds of ancient and beautiful temples were built. Many still remain and are popular destination for tourists, as are the nearby rainforest reserves, stunning mountain scenery and peaceful country villages. Chiang Mai has excellent hotels and restaurants with many international businesses relocating to the city to take advantage of its excellent infrastructure. Along with Qatar Airway’s new service from Chiang Mai to Doha, and codeshare flights with Bangkok Airways, the city enjoys direct international flight connections to all the major countries in the region, including Korea, China, Singapore, Malaysia and Myanmar.

Qatar Airways Cargo currently offers belly service on Bangkok and Phuket routes. With the introduction of passenger flights to Chiang Mai, the overall cargo capacity out of Thailand will increase to over 800 tonnes a week, supporting local businesses through the direct transit of goods, as well as exporting fresh fruits and vegetables from Northern Thailand. Qatar Airways’ expanding global network provides local businesses with extensive connectivity to markets in Europe and the Americas via Doha.

In the last four months, Qatar Airways has boosted its services with its ambitious expansion programme, which has seen destinations in Eastern Europe expanding to include Skopje, Prague, and Kyiv, as well as Adana in Turkey. It will be adding flights to many more exciting destinations in 2018, including Canberra, Australia; Cardiff, UK, and Pattaya as the airlines fifth gateway to Thailand, to name a few.

The national carrier of the State of Qatar is one of the fastest-growing airlines operating one of the youngest fleets in the world. Now in its 20th year of operations, Qatar Airways has a modern fleet of more than 200 aircraft flying to business and leisure destinations across six continents.

The award-winning airline has received a number of accolades this year, including ‘Airline of the Year’ by the prestigious 2017 Skytrax World Airline Awards, held at the Paris Air Show. This is the fourth time that Qatar Airways has been given this global recognition as the world’s best airline. In addition to being voted Best Airline by travellers from around the world, Qatar’s national carrier also won a raft of other major awards at the ceremony, including ‘Best Airline in the Middle East,’ ‘World’s Best Business Class’ and ‘World’s Best First Class Airline Lounge.’