QA strengthens ties with Russia through celebration of art 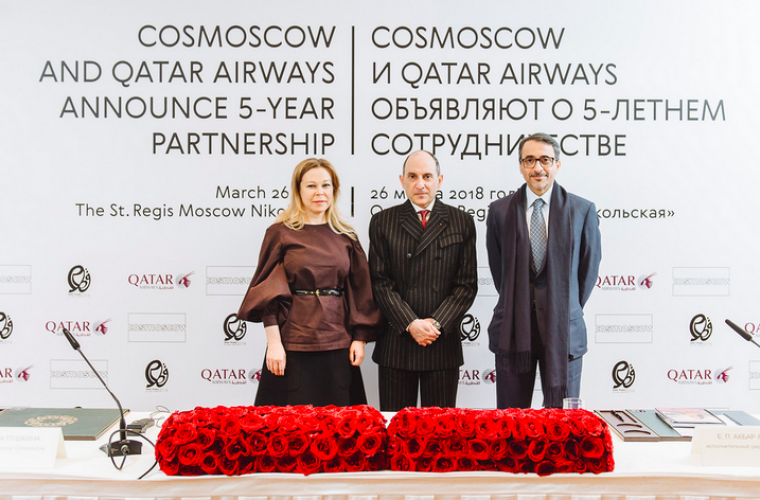 Qatar Airways has today revealed that it will further strengthen its ties with Russia through a five-year partnership with the forthcoming Cosmoscow International Contemporary Art Fair, which commences from September this year, during the widely celebrated Year of Culture between Russia and the State of Qatar.

The Cosmoscow International Contemporary Art Fair is an event that unites the contemporary Russian art market and helps its contributors establish contacts with the international art community, and is a natural sponsorship choice for Qatar Airways. The airline is widely known for celebrating the arts, with its home and hub, Hamad International Airport, featuring inspiring installations such as the symbolic Lamp Bear by Swiss artist, Urs Fischer, through to the more recent installation by American pop artist and designer, KAWS.

H.E. Mr. Akbar Al Baker commented: “Qatar Airways celebrates strong links with Russia, with triple daily flights to Moscow and daily flights to St. Petersburg, from our home and hub, Hamad International Airport. During this widely celebrated Year of Culture between Russia and the State of Qatar, I am delighted to further strengthen our ties with this partnership, highlighting our shared countries beliefs in the importance of art as a means of bringing people together. I personally look forward to Cosmoscow opening this September and to being part of this exciting international showcase.”

The Ambassador of the State of Qatar to the Russian Federation, H.E. Mr. Fahad bin Mohammed Al Attiyah, said: “During this, the Year of Culture between Russia and the State of Qatar, it is wonderful to see the collaboration between our two countries develop, not only in terms of transport links and enhanced trade cooperation, but with stronger cultural ties in this, the celebration of the arts. I am sure that this partnership will generate mutual benefits for all involved, while encouraging a flourishing arts event here in Moscow.”

Founding Director of Cosmoscow International Contemporary Art Fair and Founder of Cosmoscow Foundation for Contemporary Art, Ms. Margarita Pushkina, said: “We are honoured to become the first art fair supported by Qatar Airways and grateful to the new General Partner of Cosmoscow for long-term cooperation. Our partnership will contribute to the establishment of cultural dialogue between Qatar and Russia, as well as to the development of the Fair and its numerous initiatives. It will further strengthen the integration of Russian contemporary art into the international context. We want to thanks the Ambassador of the State of Qatar for his involvement in the process and we hope that Cosmoscow will become one of the brightest events within the framework of the Qatar-Russia Year of Culture.”

As the General Partner of Cosmoscow, Qatar Airways will first be represented at the main venue of the Fair at Gostiny Dvor from 6 to 9 September 2018 and will have an opportunity to participate in a number of Cosmoscow projects and programmes.

Qatar Airways proudly flies one of the youngest fleets in the sky, featuring the world’s most technologically-advanced and environmentally friendly aircraft, with service to Moscow three times daily and a daily service to St. Petersburg launched in December 2017.

Qatar Airways operates more than 200 modern aircraft to a network of more than 150 key business and leisure destinations across Europe, the Middle East, Africa, Asia Pacific, North America and South America. The airline is continuing its ambitious expansion plans, and will launch a host of exciting new destinations, including Cardiff, Lisbon, Antakya and Thessaloniki, including many more to come.