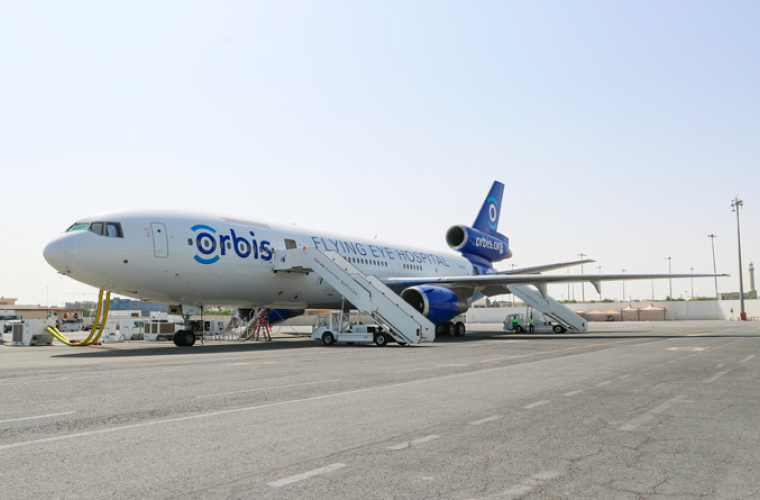 The Orbis Flying Eye Hospital, in collaboration with Qatar Airways, is hosting public and private tours inside the one-of-a-kind aircraft, as well as holding on board workshops, including Nursing and Ophthalmology sessions, in support of Doha Healthcare Week and to celebrate the Qatar Creating Vision Initiative, funded by the Qatar Fund for Development and led by Orbis.

The Flying Eye Hospital, operated by global eye health charity Orbis, is a fully-equipped MD-10 cargo aircraft with state-of-the-art medical equipment, an operating theatre and a classroom, making it a truly unique teaching facility. The Orbis Flying Eye Hospital has supported the Qatar Creating Vision initiative in Bangladesh at the end of last year. Since July 2016, 4.2 million screenings for children have been conducted across India and Bangladesh and more than 56,000 training sessions have been provided for medical professionals as well as teachers and community workers. Together, Orbis and the Qatar Fund for Development are on track to deliver an impressive 5.6 million eye care treatments to children across India and Bangladesh by mid-2020.

Qatar Airways Group Chief Executive, His Excellency Mr. Akbar Al Baker, said: “It is Orbis’ highly commendable initiative that makes us proud supporters of the global eye health charity. Since 2012, we have worked hand in hand with the Flying Eye Hospital to expand its reach and help prevent avoidable blindness around the world. We are delighted to have this unique aircraft back in Doha as part of Doha Healthcare Week and we are positive that local guests will be fascinated by the facility while touring the aircraft.”

Orbis UK Chief Executive, Mrs. Rebecca Cronin, said: “Through the Qatar Fund for Development we have been able to reach millions of children across India and Bangladesh. There are 473,000 children who are blind across the two countries, and 50 per cent of cases are avoidable. Qatar Airways' support of Orbis has been long standing, and we are immensely grateful and proud of the partnership. We would like to say thank you for welcoming Orbis and the Flying Eye Hospital so warmly and providing us with a platform to celebrate Qatari generosity.”

Qatar Airways has been a proud supporter of Orbis since 2012. The multiple award-winning airline officially renewed its sponsorship with the global eye health charity in 2017 as the Official Airline Partner of Orbis UK for three years.

Every year, the aircraft visits countries across Africa, Asia and Latin America, partnering with local hospitals to deliver specialist training through its team of world-class medical volunteers, carry out treatments, and raise vital awareness about the importance of eye health.

Since 1982 Orbis has been working to prevent avoidable blindness in areas of need. Working with a global team of volunteers and the world’s leading ophthalmic medical experts, each year Orbis delivers between four to eight training programmes on board the Flying Eye Hospital. It also runs long-term programmes in 18 countries, including Bangladesh, Ethiopia, India and Zambia, among others.

Earlier this year, Qatar Airways revealed a host of upcoming new global destinations, including the announcement that it will be the first Gulf carrier to begin direct service to Luxembourg. Other exciting new destinations to be launched by the airline include Gothenburg, Sweden; Mombasa, Kenya and Da Nang, Vietnam.

To find out more about Qatar Creating Vision, visit www.qatarcreatingvision.org