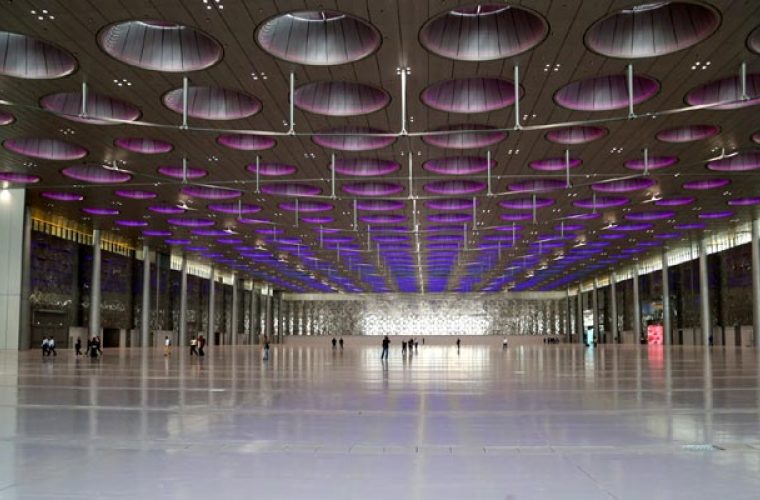 The soon-to-be-opened Doha Exhibition and Convention Centre (DECC) will further boost Qatar’s tourism potential and significantly contribute to the country’s status as a globally competitive destination for business events, a senior official of Qatar Tourism Authority (QTA) has said.
“The opening of DECC is sure to act as a catalyst to the development of the business events sector, which we estimate attracts 70% of Qatar’s visitors,” QTA’s exhibitions director Hamad al-Abdan told a press conference about the state-of-the-art QR2.3bn project on Sunday.
DECC, in the heart of Qatar’s business district, will host its first event on November 2 and five more by the end of this year, he explained.
Located just behind the City Center Doha in West Bay, the 47,700sqm venue has a state-of-the-art exhibition hall, modular wall system, high-tech meeting and conference rooms, an exquisite VIP hosting suite and underground parking for 2,800 cars.
Echoing the statements of al-Abdan, DECC CEO Jose Vicente said the addition of the new convention centre will make Qatar a stronger contender for hosting international events and attracting more visitors.
The objective is to increase the number of visitors by 20% in the next five years, focusing on business events. Qatar had seen a substantial increase in business meetings and exhibitions, averaging 150 events annually, according to al-Abdan. At least 50 annual exhibitions form part of Qatar’s scheduled events for 2015 mostly on medicine, education, real estate and handicrafts.
For the past three years, QTA also recorded an average growth of 35% on exhibitions taking place in the country every year.
Vicente stressed that increasing the number of events to Qatar will generate more jobs and enhance the skills of residents, which translates to economic growth and security.
“As the region’s business tourism continues to grow significantly year on year the addition of DECC places Qatar in a prime position to steal an even greater share of the GCC events market - estimated to be worth over $1.3bn,”Vicente noted in his speech.
He cited a report by the International Monetary Fund saying that GCC has among the world’s highest non-oil potential growth and credited with being the fastest growing international meetings market in the world.
“This combination of factors creates the perfect storm for Qatar to capitalise on its central location, welcoming culture and increasing transport routes,” Vicente said. “With the opening of DECC we plan to help realise this potential and increase the amount of global events taking place right here in the heart of Doha.”
He believes that DECC is set to become one of the most attractive meetings, incentives, conferences and exhibitions venues in the Middle East.
Set to officially open during the first quarter of 2016, the DECC is overseen by QTA and managed by a joint venture between Fira Barcelona International and ELAN Group. The venue is also set to host some of the most popular events such as the Qatar Motor Show and Doha Jewellery & Watches Exhibition.
“With such a versatile and unique offering - thanks to its considered design, central location and modern technology - DECC can cater for a wide range of clients and industries making it the perfect blank canvas for existing and new clients,” Fira Barcelona International general manager Ricard Zapatero said in a press statement.