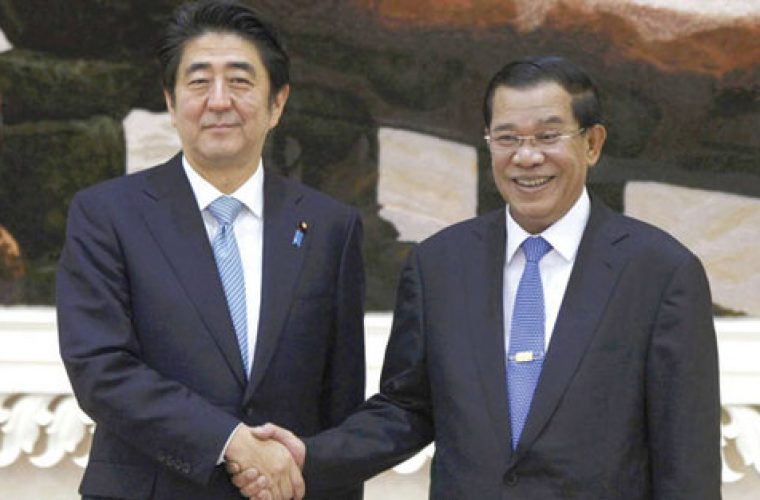 Japan’s Prime Minister Shinzo Abe yesterday pledged to strengthen ties with Cambodia as part of a tour that completes a round of visits to Southeast Asian countries within a year since taking office. Abe and the Cambodia leader Hun Sen “shared a commitment to further broadening the bilateral relationship”, according to a joint statement released after talks in Phnom Penh. As part of the wide-ranging talks, the Japanese premier also discussed his “security policy to proactively contribute even further to the peace and stability of the region”. Japan and Cambodia agreed co-operation on a variety of issues, including support from Tokyo on investment, democratic reform and health. They also discussed the possibility of finalising an agreement to launch direct flights between the two countries. Abe’s trip to Laos today will mean he has visited all 10 member states of the Association of Southeast Asian Nations since taking power last December. In contrast, the hawkish premier has not yet held sit-down talks with Chinese and South Korean leaders as Tokyo’s ties with its neighbours have been strained by territorial disputes and the legacy of Japan’s 20th century wartime aggression. Japan and Cambodia “underscored the importance of settling maritime disputes by peaceful means”, the joint statement said. It added that both agreed for the need to reach a “code of conduct” in the South China Sea, which is the subject of an array of overlapping claims by Beijing and several Asean nations. Former Prime Minister Keizo Obuchi was Japan’s last leader to visit Cambodia and Laos purely for bilateral purposes, travelling there in 2000 for talks. Abe’s predecessor, Yoshihiko Noda visited Laos in November last year to attend the Asia-Europe Meeting, which brought together top leaders from the two continents. Abe is set to meet Lao Prime Minister Thongsing Thammavong in Vientiane today. He has already visited the other Asean states — Brunei, Indonesia, Malaysia, Myanmar, the Philippines, Singapore, Thailand and Vietnam — since taking office. He is due to host a special summit with Asean leaders in Tokyo from December 13-15 to mark the 40th anniversary of ties between Japan and the regional grouping. http://www.gulf-times.com/qatar/178/details/371851/japan-premier-vows-to-boost-cambodia-ties

Want to send a tip? Drop us an e-mail at [email protected]atar.net, anonymity is guaranteed!