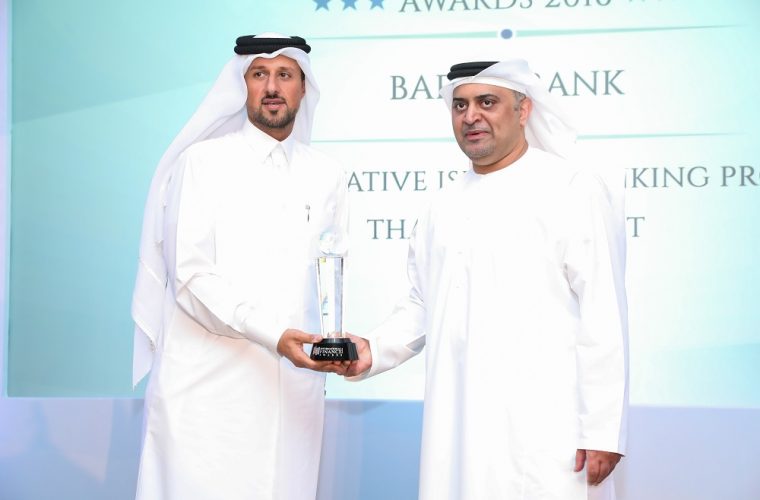 As such, the Bank’s popular Shari’ah compliant savings account ‘Thara’a’ has been named the ‘Best Innovative Islamic Banking Product in Qatar’, while its Marketing Team has been recognized as the ‘Best In-House Marketing and Communication Team’ for 2016.

“At Barwa Bank, we are truly honored that ‘Thara’a’, our one-of-a-kind savings account, claimed such a sought-after title at the esteemed IFM Awards. This award bears witness to the novelty of ‘Thara’a’ in Qatar’s Islamic Banking sector and praises its rich lineup of value-added benefits, services and cash reward scheme, which have collectively propelled it to become the savings account of choice for many bank clients in the country. The ‘Best-In-House Marketing and Communication Team’ title Barwa Bank won at the awards pays tribute to the relentless efforts and creativity of our Marketing and Communication Team, who have done their best to introduce and promote the Bank’s various offerings to clients and stakeholders, as well as played a direct role in elevating ‘Thara’a’ to the highly regarded status it enjoys today.”

“Not only has Barwa Bank taken home two distinguished trophies home at the IFM awards, but the prestigious titles demonstrate the well-orchestrated team effort behind the Bank’s offerings, from product planning and development all the way to their successful introduction in the marketplace. While we are surely pleased with Thara’a’s significant achievement, we are profoundly proud of Barwa Bank’s Marketing and Communication Team for laying out the Bank’s innovative marketing plan and faithfully executing its multi-channel creative campaigns throughout the year, which has made achieving both awards possible.”

A recent addition to the Bank’s growing portfolio of products, Thara’a offers customers an impressive array of features and benefits including unlimited withdrawals and deposits, free fund transfers across their accounts, as well as the chance to benefit from cash rewards up to 1,000,000 Qatari Riyals, a first for Islamic banks in Qatar.

The innovative savings account rewards 102 winners in total with cash prizes of up to QR 3,000,000. Thara’a account is based on Mudaraba concept and its cash prizes are allocated from the bank's own funds, purely distributed on a random draw basis.

‘Thara’a’ is available to all Qatari residents having a valid Qatari Identification including nationals and expatriates. Customers under the age of 18 are also eligible to apply for a ‘Thara’a’ saving account after complying with the minor policy as detailed in the bank’s terms and conditions. The minimum amount to open an account is QAR 10,000.

The ‘Best In-House Marketing and Communication Team’ IFM award on the other hand, celebrates the dedication and determination Barwa Bank’s Marketing team continues to demonstrate towards realizing the Bank’s goal of being a one-of-a-kind, authentic provider of distinguished Islamic and Sharia’ah compliant products and unmatched banking services to clients in Qatar and the region.