Qatar Museums announces the discovery of a new petroglyph site! 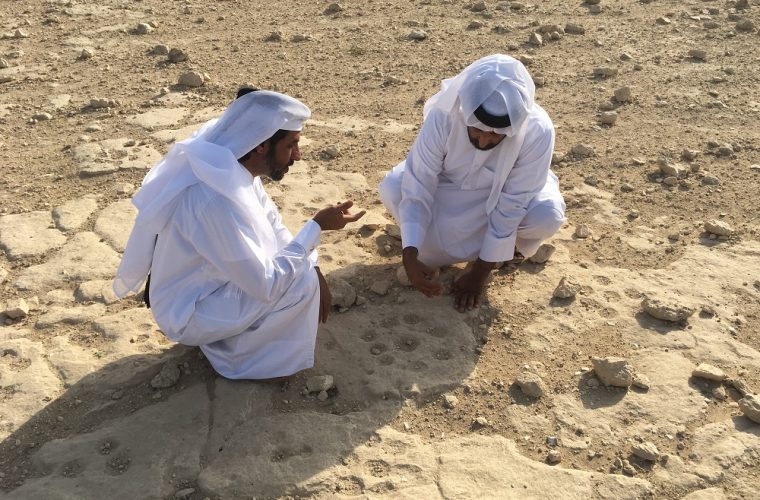 Qatar Museums (QM) has announced the discovery of a formerly unknown petroglyph site in the center of the Qatari Peninsula. The newly discovered site is spread across an area of around 15 hectares, making it the second largest rock carving site in the country after Al Jassasiya. This is the first time that a site of this kind is discovered away from Qatar’s coasts, thus completely transforming the current archeological map of the country.

The new site contains petroglyphs that are commonly known as “rosette” and consist of a central cupmark circularly surrounded by several other cupmarks. In the Gulf region this type of rock carving is unique to Qatar and is believed to have been used for a children’s game.

Since last week, QM’s Department of Archaeology has been performing extensive survey activities to document the site in detail. It is expected that the new discovery will provide more accurate clues about the function and dating of the carvings, as well as their relationship with the other sites found around Qatar.

Commenting on the discovery, Mr. Faisal Al Naimi, Director of the Department of Archaeology stated: “The newly discovered site is another addition to Qatar’s diverse archeological locations and a testament to the impact that our ancestors have had on the land. We are still conducting site surveys and tests but we believe that the well found close to the site gives us an idea about the Qatari community that lived here at a certain point in history. We also noticed that the number of “rosette” carvings here far exceeds the ones found in Al Jassasiya, making this site an important historical witness.”

QM’s Department of Archaeology was alerted about the site’s location after a call from Mr. Ali Mutar Al-Dosari, whose family has lived in the area for generations. Since his childhood, Mr. Al-Dosari had noticed the carvings near the well but only realized their potential significance after hearing about QM’s work in archeology and heritage conservation.

“Ever since I can remember, I have always been intrigued by these carvings and their story,” said Mr. Al-Dosari. “When I heard about Qatar Museum’s work in the field of archeology, I knew that I must contact them immediately. They arrived on the same day and, after conducting initial testing, informed us that the sites have an important historical significance. I am very pleased and proud to have contributed to preserving our identity and past.”

Since its inception, QM has been putting local communities, young and old, in touch with their past, reminding them of the skills, wisdom and struggles of their ancestors.