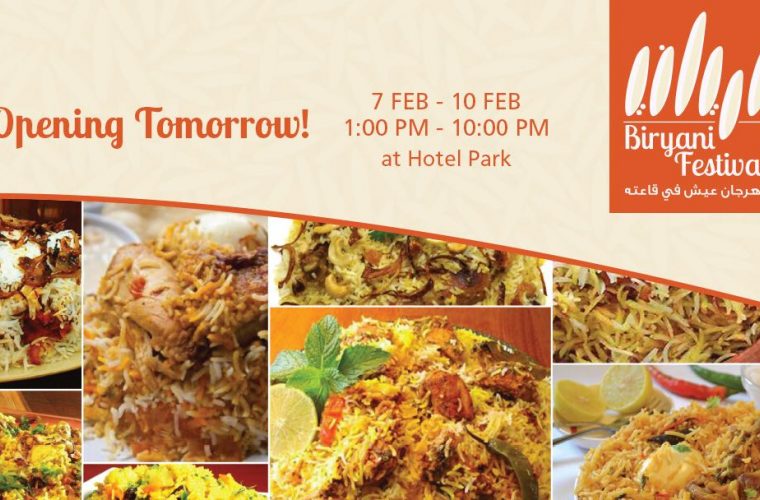 With dozens of variations representing the spices, flavours, and rich cultural traditions of India’s diverse regions, biryani may just be its ultimate iconic comfort food! And now, Doha foodies can sample the spectrum at the country’s first Biryani Festival running from February 7-10, 2018 at Hotel Park Doha.

This four-day sumptuous celebration is organized by Four and One, in partnership with Talabat, Zomato, Urban Point, and QTouch Media & Events, and will feature more than 45 exhibitors, and over 100 types of vegetarian and non-vegetarian biryani from 1:00 p.m. – 10:00 p.m. daily! From the infamous Mughlai variety, to Lucknow gosht, Kashmiri vegetable, mussels, prawn, egg, hara macchi, Malabar chicken, and traditional Afghani and Iranian varieties this fragrant event will tempt every tastebud!

The word ‘biryani’s origins comes from the Persian ‘birian’ – meaning ‘fried before cooking’ – and was once connected with royalty. The Mughlai cuisine that India is famous for was developed in the 15th century under the rule of the Mughals. Over its rich and long history, the dish evolved its distinctive depth of flavour under the Mughals who raised cooking in India to an art-form, introducing several recipes to the subcontinent such as biryani, pilaf, and kebabs.

“With a sizeable number of expats from the subcontinent in Qatar, hosting this event will help in further boosting community integration and cultural appreciation,” said Four and One group partner Omran Al Sherawi. “Aside from this, biryani has emerged to be a widely-accepted food by almost everybody, so it’s natural that an event of this nature will help participants in familiarizing with the various varieties available.”

“The number of biryani varieties is mind-blowing,” stated Four and One Group CEO Fernando De Guama. “Nowadays one can indulge in the savoured experience anywhere in Asia – including Burma, Iran, Iraq, India, Indonesia, Malaysia, the Middle East, and Sri Lanka. In India alone, each city has its own brand of biryani. The biryani dish reflects sophistication of the society and culture which goes hand-in-hand with Qatar.”

The event is entry-free and will also host celebrity Oriental chefs, competitions, games and a children’s play area.

“Coming on the heels of the successful hosting of the Chocolate, Tea, and Coffee Festival, the Biryani Festival is another way we’re showcasing the rich cultural diversity of the residents of Qatar,” continued De Guama. “This festival permits restaurateurs to be involved and help celebrate the wider range of their exotic dishes and flavours that originate from their home-land.”

Whatever its origin, biryani remains a world-wide favourite, transcending man-made frontiers, and swaying both vegetarians and non-vegetarians alike with it’s luscious flavour and aroma.

Are you excited for the upcoming Biryani Festival this week? What’s your favourite variation of this delicious dish? Drop us a line in the comments below, and don’t forget to like and share this article! See you at the festival!