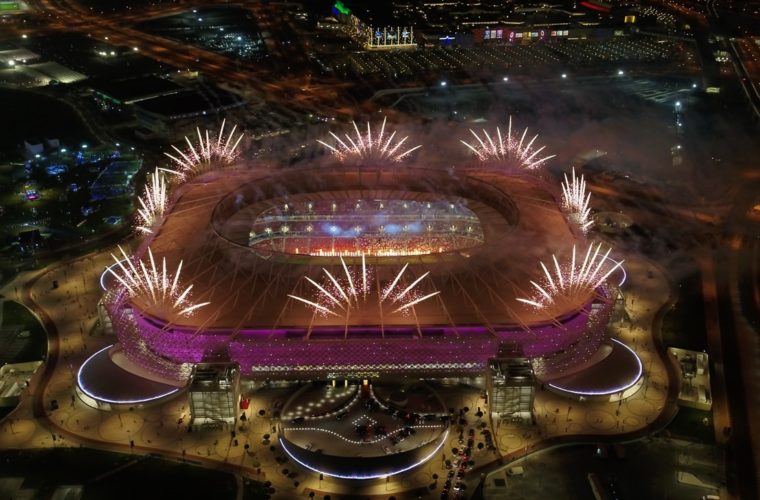 The stadium – which will become the new home of Al Rayyan Sports Club – follows Khalifa International, Al Janoub and Education City in being declared ready to host the first FIFA World Cup in the Middle East and Arab world. The 40,000-capacity venue will host seven matches during Qatar 2022 up to the round of 16 stage.

Following a spectacular pre-match ceremony featuring music, cultural performances and stunning visual effects, along with a riddle recited by presenters Hamad bin Mohsen Al Naimi and Ali bin Rhema Al Marri, the final between Al Sadd and Al Arabi kicked off. Al Sadd won the match 2-1 to claim the Amir Cup for the 17th time in front of a socially distanced crowd of 50% the stadium’s capacity.

Among the dignitaries in attendance was FIFA President, Gianni Infantino, who praised the SC for the successful completion of another Qatar 2022 tournament venue:

“Ahmad Bin Ali Stadium is a wonderful venue for football,” said Infantino. “The atmosphere is incredible, with the seats extremely close to the pitch. Even with a socially-distanced crowd, I could feel the passion for the game. I am sure this will be a perfect football arena in 2022 when it hosts matches during the World Cup.”

“I would like to congratulate Qatar on the completion of this latest World Cup project. The country is very well prepared for the next World Cup and on track to host a memorable version of the tournament – the first in the Middle East and Arab world, and the second in Asia.”

Built on the site of a deconstructed stadium, the new venue is adjacent to the Mall of Qatar and within walking distance of Al Riffa Station – on Doha Metro’s Green Line. The stadium’s most striking feature is a glowing façade, comprised of patterns that characterise different aspects of Qatar: the importance of family, the beauty of the desert, native flora and fauna, and local and international trade. A fifth shape – a shield – brings together all the others, representing the strength and unity that is particularly relevant to the desert city of Al Rayyan.

“The inauguration of Ahmad Bin Ali Stadium on Qatar National Day is another important milestone on the road to 2022 and a triumph of the efforts of everyone involved to put on such a successful event during a global pandemic. The stadium and surrounding precinct are sure to be a source of pride for Al Rayyan Sports Club and everyone who lives in this historic city.

“As we look ahead to 2021, we look forward to unveiling more stadiums in the new year, as we ensure that all tournament venues are delivered well in advance of the big kick-off in 2022.”

“Tonight was an immensely proud occasion for Qatar and the people of Al Rayyan. It was also another opportunity to test our readiness for Qatar 2022, with thousands of fans enjoying the spectacle, despite the challenges caused by the ongoing pandemic. We look forward to developing the Qatar 2022 fan experience further next year when we host more major tournaments, including the FIFA Club World Cup and FIFA Arab Cup – events which are sure to excite football lovers in Qatar, across the region and around the world.”