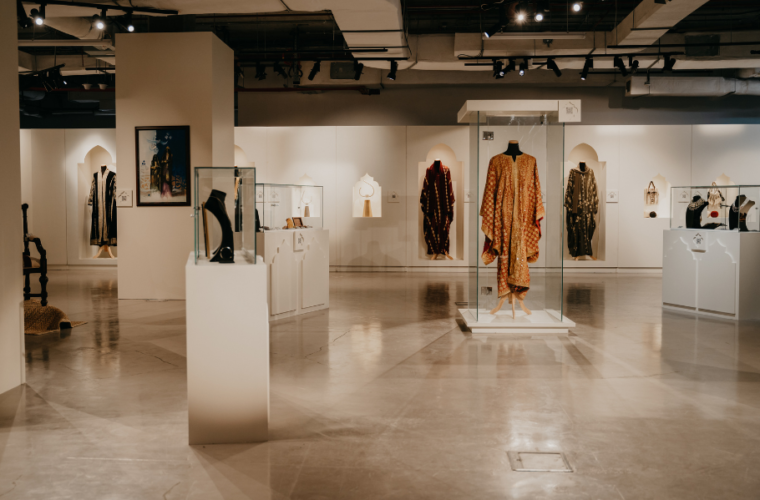 Qatar’s creative hub M7 is proud to present a series of new exhibitions and pop-ups which are on display during the FIFA World Cup Qatar 2022 period. Established under the leadership of Her Excellency Sheikha Al Mayassa bint Hamad bin Khalifa Al Thani, the latest exhibitions Anassir, Home Grown, Mesra and MilanoxDoha showcased by M7 features several local artists and designers. The epicenter for innovation and entrepreneurship in fashion, tech and design (M7), aims to empower and support local designers, while inspiring the local community of all ages and backgrounds.M7 now invites the public to discover Doha’s emerging designers and visit its latest exhibitions, with free entry, hroughout the duration of the FIFA World Cup Qatar 2022, with some on display until the end of January 2023.

Yeebhom is a legacy project which was produced in collaboration with the world-renowned La Cité internationale de la tapisserie in Aubusson, and was supported by her work In'ekas (Introspection), which was produced during her residency at Fanoon–Centre for Print Media Reserach at VCUarts Qatar. Born out of the relationship established during the Qatar-France 2020 Year of Culture, Yeebhom (Bring Them Back) serves as a commemoration of the 50-year anniversary of diplomatic relations between Qatar and France. The unique artwork blends French Traditional and Qatari Contemporary influences, inviting the viewer to discover traditional weaving craftsmanship through the lens of a contemporary artist.

Al Muftah’s multidisciplinary practices culminate in 360 unique and profound explorations of Qatari culture and its rapid development over a short period of time. Her exhibition which is on display until the end of January, is hosted by M7, supported by Audi’s House of Progress initiative, and jointly curated by online art gallery Emergeast.

With a career spanning 15 years, photographer Khalid Hamad Al Thani is connected with the desert landscape, positioning the non-human habitat as a central element. Mesra (Path) is an installation consisting of sound and photography. Drawing inspiration from the surrounding environment, and focusing on its movement and geometry, his work looks to spark conversation around the multidimensional nature of the desert, and to evoke a visual and theoretical presence that disrupts popular notions of its heritage aesthetic.

The route traveled by the passing figure–the horse–is motionless yet central to the image. If the viewer looks beyond the beauty of the subject and the hyper detailing of the body lines, the intertwined gestures of shadow and outline suggest a shared hierarchy written by light. In the image, the horse cuts through the path into joyous clarity despite the “lackness” of visible light and a clear destination.

The subject’s minimal occupation of the space is intentional and is often highlighted by Al Thani to present a commentary on the universality of the desert which occupies one-fifth of the planet’s land. The sound element, which is composed by layers of recordings collected by the artist, accompanies the work from distance signifying the abstraction of emotion. Al Thani has showcased on the local and international stage.

The Age of Modern Architecture in Qatar

A series of images by Joel Tjintjelaar

Qatar Tourism presents The Age of Modern Architecture in Qatar by award-winning photographer Joel Tjintelaar. The exhibition is a product of the photographer’s 10-day trip to Qatar–a journey made to capture the country’s renowned architectural prowess. The exhibition consists of twenty-nine striking black and white images by the fine art photographer, and draws inspiration from buildings which embody Qatar’s cultural identity, such as the National Museum of Qatar, the Museum of Islamic Art, and other poignant structures.

By establishing a relationship with the absolute beings of the socially isolated subject, Tjintjellar hopes to reveal their real potential through his art. The absence of color in his works unveil the very essence of his subject, and the emotional experience they create. Tjintjellar’s advanced and sophisticated approach to portraiture, combined with the expressive language of black and white photography, captures the identity of the architects, architecture, the artist, and of Doha and Qatar as a whole.

Home Grown Gallery, a collective work by seventeen Qatari artists, looks to strengthen the Qatari identity and introduce the present and future generations to the heritage and tradition of handicrafts, such as Sedu weaving and jewelry making.

The exhibition seeks to highlight the skill of designers in producing works of art which combine traditional craftsmanship with modern and contemporary spirit and influence, as well as to promote small businesses affiliated with NAMA.

This pop-up exhibition showcases several crafts, such as the traditional Al-Najada craft, the art of embroidering traditional fabrics and costumes with embellishments–especially light fabrics–with silver and gold wires.

In conjunction with Milan Design Week

M7 brings the world’s most prominent design event, Milan Design Week, to Doha. Showcasing unique furniture design in a display of unique and non-conformist pieces, Qatari and Doha-based designers bring together timeless aesthetics and unique materials in their creations.

The artists behind these original pieces hope to encourage more sustainable living through their designs, but also to express the importance of preserving cultural identity in an era of rapid globalization.

The showroom is hosted by M7 and exhibition is hosted by FROMM–a collaboration platform that supports and empowers the local design community through mentorship and coaching in furniture and product design.

The works on display include the Shurouq collection, designed in collaboration with design platform FROMM and Qatari designers Maryam Suwaidi and Shua’a Ali, Melting Pottery by the MFA in Design program at VCUarts, Qatar, The Freedom Bench by Shaikha Al Sulaiti (crafted from recycled Hermes Birkin bags), and Eggo by Nada Elkharashi (a comment on the over consumption of single-use materials). These works were featured in Milan Design Week 2022 in the Rossana Orlandi Gallery.