FIFA president tells beIN SPORTS in an exclusive interview: "Qatar Will Be Best World Cup Yet" 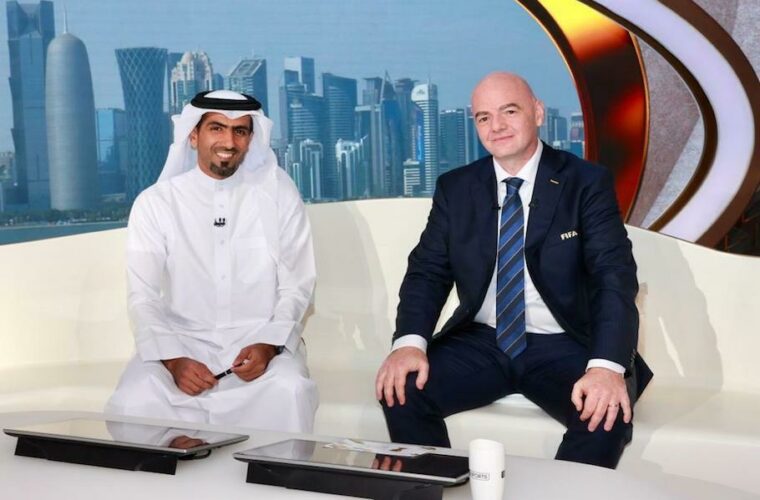 In an exclusive interview with beIN SPORTS conducted by one of the leading presenters Mohammed Saadon Al Kuwari, FIFA President Gianni Infantino said that the FIFA World Cup Qatar 2022™ will be the best edition yet, with players at peak strength having not had to play a full season before challenging for honours in the globe’s biggest sporting event.

During the interview with beIN – the Official Broadcaster of the FIFA World Cup Qatar 2022™ for the Middle East and North Africa (MENA) and France – the FIFA President was bullish about the tournament’s prospects.

“We are all very excited for the World Cup to kick off. It will be the best World Cup. Everything is ready – everything is geared up, the teams are here. […] Players come without having played an entire season. They come at peak strength, and so we should see a fantastic World Cup,” he said.

He added: “I have never seen a country which is so focused on an event and so prepared for an event like Qatar.”

Infantino said the 2022 tournament had particular importance being the first to be held in the Arab World. “There are hundreds of millions of Arabs in the world and 99.9% of these are football fans, so to bring football to this region brings a lot of pride and is crucial. [Fans] will come here and experience a country that is very Arab, but also very welcoming. It is a celebration and an enrichment of culture. The Arab world is presenting itself to the world and this is something only the World Cup can bring,” he continued.

He also explained that the tournament would be a unifier of people. “Football unites the world. This is the one and only topic everyone can agree with. Everyone is a fan of football –local teams, national teams or one in Europe. […] This element of uniting 5 billion people, 2/3 of the world population, watching the same event – will have a great impact in today’s world. We have hardly anything that brings us together anymore, but football unites.”

Looking ahead, the FIFA President pledged to make football global and inclusive.

“My promise is to continue to work hard to make football truly global, so it has the same value globally as it does in Europe. We need to bring it up and create good teams, competitions, and investment all over the world and raise the global level of football for girls and boys. We will do that in the next four years,” he concluded.