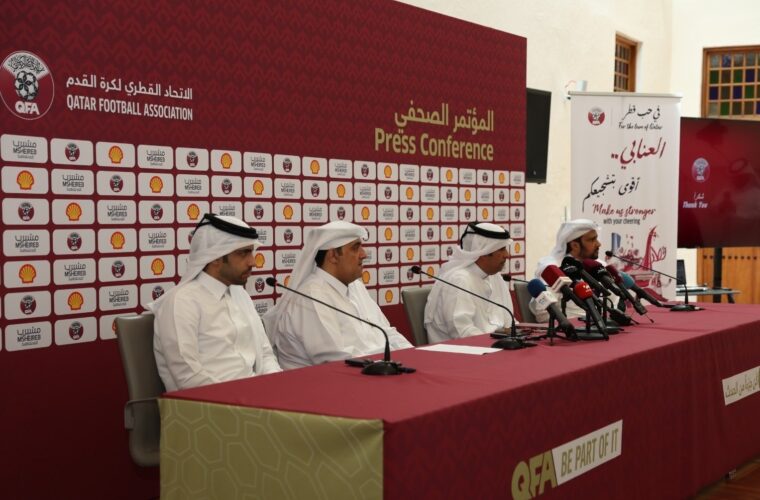 The Qatar Football Association (QFA) held a press conference on 17 September 2022 to announce its promotional campaign to support the national team for the 2022 World Cup, with various activities and events for fans, in cooperation with the QFA’s main partners, and official sponsors of Al Annabi.

The press conference was held at the Bin Jelmoud House in Msheireb Downtown Doha, and it was attended by Khaled Mubarak Al-Kuwari, Director of Marketing and Communications Department of the Qatar Football Association, Ali Hassan Al-Salat, Head of the Communications Department of the QFA, along with a group of officials from partners and sponsors, led by Dr. Hafez Ali, Director of Marketing and Communications at Msheireb Properties, Jamal Al-Nahdi, CEO of Al-Nahdi Group, and Jaber Al-Mansour, social investment strategist at Qatar Shell, and representatives of various media outlets.

At the outset, Khaled Al-Kuwari welcomed the attendees, and explained that the upcoming period will witness the activation of the promotional campaign to support our national team in the 2022 World Cup, with the launch of various events and recreational activities for fans, in addition to new content provided by the QFA through its various social media platforms.

Khaled Al-Kuwari on the fans' participation

“We are expected to witness an exciting interaction with this campaign from our loyal fans, who will be up to the task and show their support for the national team, as we are used to seeing in previous events. We hope they will enjoy the various events that will be presented to them in cooperation with our main sponsors and supporting partners.”

Al Annabi's training session to be open to fans

As per a report by The Peninsula, Khaled Al-Kuwari also mentioned during the press conference that a training session by the Qatar national team on 2 October 2022 will be open for fans to attend.

Al-Kuwari also described the details of the marketing campaign that has been launched under the slogans “For the love of Qatar” and “Make us stronger with your cheering” on social media.

In addition to the above, the QFA has also kickstarted its account on Snapchat, and Al-Kuwari said: “We are launching our account on Snapchat, because we are always working on new ideas and striving to create unique content in a modern manner. We are constantly looking for various options in social media, which will give us different ways of providing our content and also develop the content that we offer to various segments of our community.”

“This ensures that our communication channels reach everyone and we are able to provide content on our national team to a wider audience.”

“We also take this opportunity to invite Qatari fans to decorate their homes and support the “Zeenah” initiative launched by Ashghal. We will also distribute gifts to fans in different places in the country in October, and we will announce their locations later” says Al-Kuwari.

Speaking about the national team’s new kit, the Director of Marketing and Communications said, “The team’s kit has been launched in maroon and white colors, which symbolize the Qatari identity and our authentic heritage. The shirts will soon be available at Nike stores and QFA sale outlets.”

"The QFA’s activities in Msheireb are an opportunity for all fans to enjoy the World Cup atmosphere at the highest level" says Dr. Hafez Ali, Head of Marketing and Communications Department at Msheireb Properties.

He also stressed that this cooperation with the Qatar Football Association is not new, but was preceded by many other excellent previous events, and stated that the coming period will witness various events organised for Qatari fans in the ‘Company House’ sponsored by Qatar Shell.

“This will be a great occasion for Qatari fans, citizens and residents alike, and visitors from all over the world to enjoy these events, which will take place in November 2022, just prior to the World Cup.”

He added: “The fans of our national team are set to experience some unique events – which are being held for the first time – in cooperation with the Qatar Football Association and Qatar Shell, and we have had a lot of coordination and fruitful meetings in this regard, in order to reach a formula for cooperation between us.”

“This partnership is the first of its kind, and we aspire to continue this cooperation with the Qatar Football Association, in appreciation of their marketing and media efforts in all the tournaments in which our national team participates, whether inside or outside Qatar.”

He further explained: “The origins of the pioneers of the Company House go back to the Qatari city of Dukhan, the city that witnessed the launch of football in the State of Qatar, in addition to highlighting the heritage district as an important tourist destination in the heart of Doha and a major center for introducing Qatari culture and history to all the fans who will come here for the World Cup.”

“These symbolic events will celebrate our national team, its football history and its achievements, which now culminate in its first participation in the World Cup finals, and the organisation of the tournament by the State of Qatar for the first time in the Middle East and the Arab region.”

Meanwhile, Jamal Al-Nahdi, CEO of Al-Nahdi Group, said: “Our partnership with the Qatar Football Association comes within the framework of our support for the national team, ahead of its first FIFA World Cup participation at Qatar 2022, which is something that we are proud of and the least we can offer to the national team, and the loyal and passionate fans of Al Annabi who love football and deserve all our appreciation and attention.”

“We will be providing a lot of services in appreciation of the fans’ endless support for our national teams.”

Al-Nahdi went on to state that several options will be offered to the fans, including decorating cars according to the conditions set by the Traffic Department. This service is available in Al-Nahdi branches, in addition to the Lusail event, which will be launched on 15 November 2022.

Fans who install stickers containing pictures of the national team players and the flag of the State of Qatar, on their cars, will receive gift coupons.

The CEO of Al-Nahdi Group concluded by explaining the details of the initiative in accordance with the terms and conditions, which are: