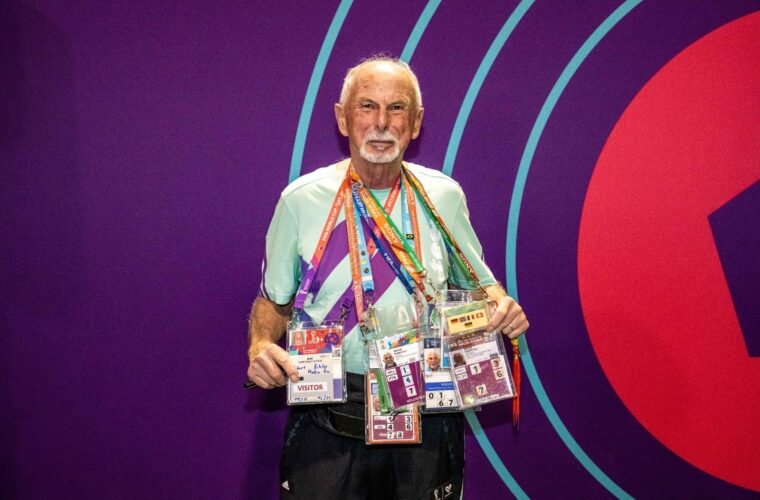 A 76-year-old volunteer from Germany is participating in his fifth FIFA World Cup™ in Qatar. Hubert Bihler is overjoyed to be supporting the first edition of the tournament in the Middle East and Arab world.

Bihler is one of more than 20,000 volunteers involved in this year’s World Cup. He supports media operations at Stadium 974 – one of eight state-of-the-art tournament venues and the first fully-demountable stadium in FIFA World Cup history.

The Supreme Committee for Delivery & Legacy held an interview with Bihler to learn more about his experience in Qatar.

Tell us about yourself. How did you start volunteering?

Bihler: I am from Dunningen in the Black Forest region, close to France and Switzerland. I have been a football enthusiast all my life. I worked as a sports and mathematics teacher, but was always involved in football. I was a player and coach. Football was always a part of my life and after I retired, I began to volunteer in mega events. My first experience was the 2006 FIFA World Cup in Germany. From there, I fell in love with volunteering.

Tell us about your previous volunteering experiences.

What does your role as a media operations volunteer entail?

Bihler: We support the smooth experience of media who are here to cover the tournament. Recently I managed over 130 photographers who were assigned to capture the action during Mexico versus Poland.

What is unique about this experience in Qatar?

Bihler: This is actually my first volunteering experience in the Arab world and so far, the generosity and hospitality of people in Qatar have impressed me. It’s all about the encounters we have. Volunteering enriches my life in a great manner.

What motivated you to become a Qatar 2022 volunteer?

Bihler: The 2018 FIFA World Cup was actually going to be my last event as a volunteer, but my wife unexpectedly passed away. I wanted another challenge so I decided to apply to volunteer in Qatar.

How has your volunteer experience been so far?

Bihler: I have experienced many memorable moments here in Qatar. A big one was seeing volunteers from all parts of the world recognise me from other FIFA events. This World Cup has a wonderful, friendly atmosphere. It’s nice to see fans celebrating in a peaceful manner, with respect for one another.

Which team are you supporting?

Bihler: Now that my beloved Germany didn’t qualify for the round of 16, I will be supporting Brazil. They have a great team and I also have many Brazilian friends.